Jack Censer is emeritus professor of history and the former Dean of the College of Humanities and Social Sciences at George Mason University. His books include Liberty, Equality, Fraternity: Exploring the French Revolution and Visions and Revisions in Eighteenth-Century France. His latest book is Debating Modern Revolution: The Evolution of Revolutionary Ideas (Bloomsbury Academic, 2016). 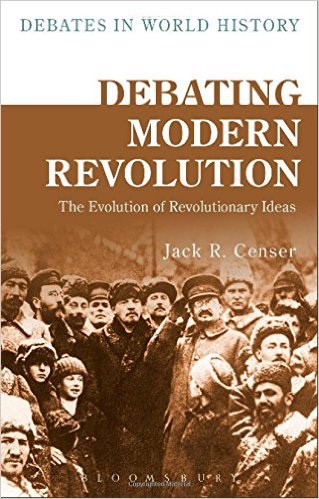 After a career largely devoted to studying the French Revolution, I spent the last two and half years writing a short book on revolutionary ideas from the democratic revolutions to the 1980s, Debating Modern Revolution: The Evolution of Revolutionary Ideas. Written for students and a general audience, this book begins with America and ends up in modern Iran with numerous stops along the way.

Suggested by my colleague Peter Stearns for his series in global history, this book engrossed me as it fitted the long interest in revolution that had first led me many years ago to focus on France, but also because the time was ripe for such a study. The global perspective has penetrated all fields, but it is especially apt for the study of revolution because, despite a clear beginning in the Atlantic world, modern revolution has spread throughout and its adherents are often well aware of one another, past and present.

Moreover, the focus on ideas is very timely. Although scholars interested in particular revolutions have investigated those underlying ideas, seldom, and certainly not recently, have they written about such ideas together over spans of time. A major exception would be James Billington, who some forty years ago published Fire in the Minds of Men that traced revolutionary notions from the Americans to the Russians. His focus remained on the North Atlantic world.

Even though historians have shown relatively little further interest in connecting up global revolutions, social scientists filled the gap. Yet their interests seldom addressed ideology itself. In addition, they have found little success in achieving their own goal – establishing a clear and commanding interpretation of the causes of revolutions. The more that the sociologists and political scientists studied, the more that their the target – locating the interaction of causal political, ideological, and social factors – receded before them. Generations of scholars noted that accepted explanations for revolutions in general revealed a coincidence of certain elements, but no causal chain could be firmly established. In short, these scholars’ internal debates became more and more specific, only to yield to criticism and then new efforts at greater precision. Few results were achieved. Moreover, historians noted that individual cases differed too much to isolate preconditions and triggers that operated across revolutions.

Frustration in part has led historians of particular revolutions back to the study of ideas, assumptions, and concepts. In addition, scholars turned significantly toward culture and ideas as a subject of interest and, relevant here, as an important agent in change. To be brief, the cultural turn, or postmodern analysis came to see ideas as central to explicating behavior. Specifically, scholars began to focus on the rise of certain assumptions or ideas in regard to revolution in which radical beliefs would organize reality and justify action. Ideas became a central subject. Furthermore, some topics in the study of ideas grew rapidly and could be assimilated into new studies of revolution. In particular, the explorations of the Enlightenment flourished. Much attention went into understanding natural rights – defined in this era as equal rights – that would become so central in the democratic revolutions in colonial North and South America and France. Nationalism also framed revolution as scholars found that beliefs in ethnic difference could rock the political landscape. Another major transition has been the reformulation of Islamic religious beliefs into a revolutionary force.

Thus, not surprisingly, the time has arrived to link the recent interest in particular revolutions to the study of global revolutionary ideas. Not only my work but another book of essays was published several weeks ago on the subject of revolutionary ideas. Although the two books have a different perspective – mine emphasizes change and discontinuities and Scripting the Revolution (edited by Keith Michael Baker and Dan Edelstein) stresses continuities, the two share some topics. In my case, the emphasis falls first on liberal democratic revolutions of the eighteenth century whose concepts continue to play an important role today, even though their origins can be found in traditions dating back centuries. Layers of new, more or less related revolutionary goals emerged in the 1800s that focused on nationalism and social revolutions, in particular, the rise of Marxist analysis. Despite its foundational source in the work of Karl Marx, Marxist revolutionaries altered the ideology and reshaped the concept of proletarian to being a peasant or even a colonial subject oppressed by imperial power. Religious revolutionaries added another entirely new surge of revolutionary notions.

While in many ways, this last ideology worked to restore a religious regime, it also overturned and challenged monarchial and authoritarian governments and promised a more egalitarian social system. In the past, religion had generally reinforced conservative regimes; in the last forty years it showed it could become a revolutionary force. And Islam in particular, which generally had been comfortable with merchant and aristocratic wealth, changed direction in some places. In sum, the comparative global history of revolutionary ideology is new, but it is also the combination of many factors, some illuminated above, which make its arrival expected.