How Many Human Skeletons Are in U.S. Museums?

Samuel J. Redman is an Assistant Professor of History at the University of Massachusetts Amherst. He’s the author of the new book, Bone Rooms: From Scientific Racism to Human Prehistory in Museums (Harvard University Press, 2016). 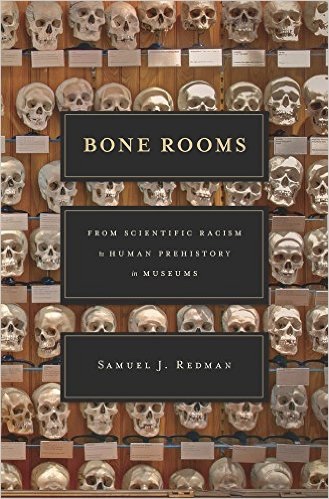 Spring tends to bring visitors back to museums. Relatively quiet during the frigid winter months, the exhibits at the Smithsonian in Washington D.C. will soon be bustling with activity again. Hundreds of school groups, tourists by the thousands, and even a smattering of locals will visit the museums for the first time.

For a time in the late nineteenth and early twentieth centuries – collectors of all kinds, ranging from professional archaeologists to medical doctors and amateur explorers – shipped boxes containing the bones of the dead to create the largest physical anthropology collections in the world. In researching and writing my book Bone Rooms: From Scientific Racism to Human Prehistory in Museums, I explored the history of collecting and exhibiting these bodies in museums both large and small across the United States. For historians, anthropologists, and archaeologists interested in pinning down exactly how many human remains are housed in museums across all of the United States – this has proven to be a surprisingly challenging question to answer.

In 1990, a new law, the Native American Graves Protection Act (NAGPRA) mandated that museums receiving any federal funding inventory their skeletal collections, which might potentially fall under the guidelines of the new law. Twenty-five years later, as of October 2015, the National Park Service estimates that 50,518 individuals have been repatriated or returned to tribes from museum collections around the United States.

Recent estimates suggest the number of Native American remains held in the collections of U.S. museums number about half a million. Adding to this figure are a smaller (but still significant) number of skeletons from African Americans, European Americans, and indigenous peoples originating from places all around the entire planet. According to a recent survey, over 116,000 sets of Native American human remains and nearly one million burial objects are considered by museum scientists to be culturally unaffiliated, meaning that no specific tribal origin has yet been assigned to these sacred objects. Without affiliation, these bones are technically not eligible for return until a firm cultural connection to living ancestors can be established. While many anthropologists and museum professionals posit that great care must be taken in determining the proper cultural affiliation, others charge this rule has been used as a loophole to guard certain museum collections from repatriation to Native peoples. Compounding an already complex legacy, another half a million Native American skeletons are thought to lie in collections in museums throughout Europe.

The estimated numbers of human skeletal remains in museums noted above are extremely conservative. While the available literature suggests otherwise, a huge portion of the skeletons arriving at museums in the United States during their most active periods of collecting human remains actually came from private donors, rather than professional archaeologists. Army physicians, explorers, and many others compounded the rapidly expanding venture to collect human bones for museum collections in the United States. These individuals felt compelled to donate bones to museums for a variety of reasons, some of which are hinted at in the archives. In 1879, when a letter arrived at the Army Medical Museum attached to a box containing a human skull, curators likely read with great interest the following:

Sir, In 1869 when serving at Ft. Randall ... I received an order from your Dept. to make a collection of Indian Skulls for the Nat. Med. Museum. I complied with that order to the utmost of my ability. I then forwarded the collection to Washington as ordered except one Ogalalla skull of a young squaw that died of phthisis. I retained that skull on account of the remarkable beautiful teeth she had – every tooth was perfect and of the most symmetrical order. The skull, now at this late day, I have sent you by mail for the museum. The teeth did not stand the test of time, exposure, or perhaps the arid climate of this country. I am sorry that a few of them got lost. I secured the skull from a scaffold that was created on a high hill, overlooking a small indian [sic] village – about 16 miles up the Missouri river from Ft. Randall. As I got it in the day time, and before the eyes of many Indians, who could see me in the distance, I had a lively adventure with it – perhaps partly on that account, I held on to it as long as I did, as a trophy. If your receive it, please let me know.”

While some bones collected as trophies ended up in museums, as did the above example, it is also clear that many skulls and other bones continue to languish in the closets and on the fireplace mantles of private collectors throughout the United States and beyond. We owe it to the dead to keep better track of our prolonged efforts to turn them into trophies, scientific specimens, and valuable collectables. These significant wrongs must be addressed. We must also after so many years - finally - fully confront this complex legacy in a more thorough manner, one deserving of our most important cultural institutions.