Yes, We Apologized to Iran and Should Have after Our Sailors Crossed into Their Waterways 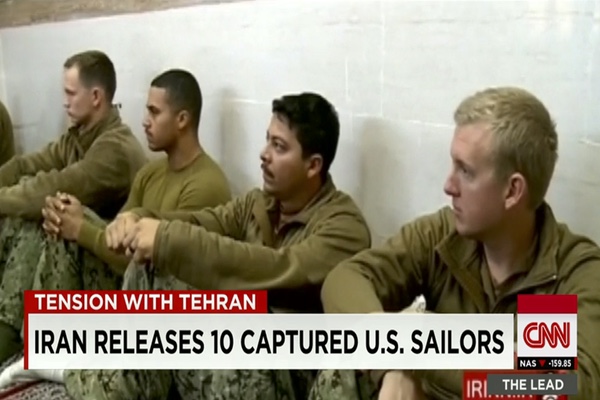 The apology that a U.S. sailor gave after being detained by Iranian security forces in Iranian waters has set off a firestorm of criticism over the humiliation of our military. The video that was taken by Iranian soldiers saw the man identified as the commander of the U.S. vessel as saying, "It was a mistake that was our fault and we apologize for our mistake. It was a misunderstanding. We did not mean to go into Iranian territorial water. The Iranian behavior was fantastic while we were here. We thank you very much for your hospitality and your assistance."

Cries of a “disgrace” and “humiliating” were heard by those who could not bring themselves to credit the diplomats with the sailors’ release and the avoidance of an international incident that could have derailed not only the nuclear deal with Iran, but also, we have since learned, an exchange of prisoners that had been the subject of negotiations for well over a year. One Congressman, Tom Rooney, from Florida and a member of the House Select Permanent Intelligence Committee, implied that the State Department had instructed the sailors to “make that kind of statement.” The State Department was vigorous in its denial that an apology had been issued in order to obtain the release of the sailors.

Absent from the back and forth of accusation and denial is any discussion of the merits of apology, either as national policy or behavior, towards foreign or domestic parties.

The rush to reject apology makes one wonder what happens to the approach to family disputes. Is an apology under those circumstances a sign of weakness, or is it a recognition that the path towards resolution might require an apology?

For sure, foreign policy is not marital reconciliation. Yet, history shows apologies have been an element of U.S. behavior, at home and abroad.

Coincidentally, the sailor’s apology came within days of the anniversary of the U.S. overthrow of the legitimate ruling monarchy of Hawaii. On the 100th anniversary of that event, a bipartisan majority in Congress issued a resolution apologizing to “to Native Hawaiians on behalf of the people of the United States for the overthrow of the Hawaiian Kingdom on January 17, 1893” and for the “deprivation of the rights of Native Hawaiians to self-determination.”

Other examples spring readily to mind: the issuance of apology to and even compensation paid to the Japanese-Americans sent to detention camps during World War II (an event that Donald Trump cited as justification to ban the entry of all Muslims into the U.S.)

Less well known was the first visit to Mexico by a sitting U.S. President, Harry Truman, in 1947. Truman did not have to utter the precise words of apology as he laid a wreath at the Mexican monument to their Niños Héroes on the eve of the centennial of the war with Mexico which saw the loss of nearly half of its territory. Mexicans not only took the gesture as an apology, but, instead of seeing it as weakness, they received it in the way it was offered. They enthusiastically embraced Truman as a “new champion of American solidarity and understanding,” in the words of Mexican Foreign Minister Ramon Beteta. Others went further, as one eyewitness was quoted as saying, “one hundred years of misunderstanding and bitterness wiped out by one man in one minute.” The response led President Clinton to repeat the gesture in 1997 when he visited Mexico City.

U.S. allies around the world are less reluctant to abjure apology as a component in their foreign relations. In 2007, the British government expressed regret and authorized payments of £20 million to compensate victims tortured by its forces during the Mau Mau rebellion against British rule in Kenya in the 1950s. Just last month, Japan’s Prime Minister Shinzo Abe offered “apologies and remorse” for the “immeasurable and painful experiences” suffered by women in Korea forced to provide sexual services to Japanese soldiers during the World War II. As part of a settlement with the government of South Korea, Japan agreed to make payments to a fund for victims. Other examples include Canada’s apology in 2008 to First Nations peoples for the system of Indian Residential Schools and Australia’s apology in 2014 to Indonesia for naval ships straying into Indonesian waters without permission.

The apology last week in the Persian Gulf differed from other examples in that it was likely a spur-of-the-moment decision by the commander, as opposed to national policy arrived at after considerable discussion, and in the Hawaii and Mexico examples, after 100 years has lapsed. However, U.S. and NATO have apologized for military operations that result in civilian deaths, following full investigations.

Presidential politics make the issue of apology harder. Taking a cue from Mitt Romney’s campaign book titled, No Apology: The Case for American Greatness, candidates and pundits on the eve of the Iowa caucuses rushed to criticize weakness, claiming as well that the Iranians violated the Geneva Convention and its clauses related to treatment of prisoners in wartime. Such short memories. Less than ten years ago, these same individuals were trying to back away from and even rewrite that convention to suit U.S. methods of interrogation.

A refusal to accept any measure of accountability for U.S. behavior implies that no actions have been taken that have been either mistaken or misguided or immoral. Or that they were justified to make America great. Seriously?

In discussing the negotiations that Secretary of State John Kerry and his team had with Iran over the prisoner exchange, he recalled that the Iranians repeatedly raised the 1953 coup organized by U.S. intelligence to overthrow the legitimately elected Mohammad Mossadegh as President of Iran. The Iranians remember, and we deny.

I do aspire to the notion of greatness for my country that I served for almost 30 years. It is a greatness, though, that has the strength, confidence and wisdom to hold itself accountable for its errors and to aspire to do better.