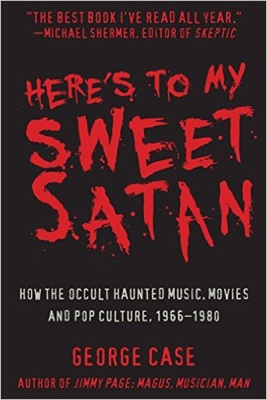 Quick, can you name the hidden connection between Donald Trump and Ozzy Osbourne? Or between Ted Cruz and Bigfoot? And have you noticed that Hillary Clinton and the Antichrist are never seen together? Coincidence? You be the judge!

In truth, the steady incursion of the fantastic and the irrational into American political discourse has been perceived for some time. Nancy Reagan consulted an astrologer to help plan her husband's presidential schedule; Pat Robertson suggested feminism was a plot to make women take up witchcraft; Rick Santorum identified "the father of lies, Satan," as America's Number One enemy; and still today we have the conspiracy theories of Truthers (who believe 9/11 was an inside job orchestrated by the Bush administration), Birthers (who insist Barack Obama's certified eligibility for high office is fraudulent), and Deniers (who reject the scientific consensus that human activity contributes to climate change). Yet what's seldom discussed is where this national predilection for unreality came from.

The occult boom of the 1960s and 70s is surely one point of origin. Between Time magazine's "Is God Dead?" issue of April 1966 and the November 1980 publication of Michelle Remembers, a purportedly factual account of horrific child abuse by devil worshippers, a fascination with dark spirituality, the supernatural, and sheer superstition swept western popular culture. Much of it, to be sure, was only a commercial cash-in, but all of it added up to a transformation of mass thought and mass faith. There were blockbuster movies, including Rosemary's Baby (1968), The Exorcist (1973), The Omen (1976), and The Amityville Horror (1979). There were bestselling books like Thomas Tryon's The Other (1971), Flora Rheta Schreiber's Sybil (1973), the rediscovered fiction of J.R.R. Tolkien and H.P. Lovecraft, and the earliest novels of Anne Rice and Stephen King. There were the media manias for Bigfoot, the Bermuda Triangle, and the "ancient astronaut" conjectures of Erich von Daniken's Chariots of the Gods? (1970).

Meanwhile, countless heads were banged to the heavy metal mysticism of Led Zeppelin, Alice Cooper, Blue Öyster Cult, and Black Sabbath (Ozzy's old band). The Beatles put the self-styled "Great Beast" Aleister Crowley in their gallery of portraits on the cover of Sgt. Pepper's Lonely Hearts Club Band in 1967, and the Rolling Stones had "Sympathy For the Devil" in 1968. Kids munched on Count Chocula and Franken Berry cereal as they watched the cartoon mysteries of Scooby-Doo, Where Are You? before flipping through their Creepy, Vampirella, or House of Secrets comics; their older siblings were downstairs playing Dungeons & Dragons or attempting to consult the fabled "other side" via a Ouija board. Tarot cards, I-Ching stones, and astrology captivated millions, just when the fewer practicing witches and converts to Anton Lavey's Church of Satan attracted a rush of mainstream publicity disproportionate to their numbers. Even the occult-linked homicides of the Charles Manson family, David Berkowitz (the "Son of Sam"), and the never-apprehended Zodiac Killer were classed into the phenomenon. The forces of the unknown had become as real as the bedroom bookshelf, the local movie house, the daily horoscope and the nightly news.

But a backlash was brewing. As early as 1970, evangelist Hal Lindsey had co-authored his work of apocalyptic Biblical prophecies The Late Great Planet Earth, which became the most popular nonfiction title of the decade. He followed up with Satan Is Alive and Well on Planet Earth (1972) and The 1980s: Countdown to Armageddon (1980). Responding to a supposed decline in traditional values, for which the occult was ascribed some of the blame, Jerry Falwell formed his powerful Moral Majority lobby in 1979. As the social pendulum swung back after 1980, the previous decades' indulgences in the devilish spurred an American "Satanic panic," wherein religious zealots detected evil messages in backward-played recordings of Led Zeppelin's "Stairway to Heaven," malefic influences in the Dungeons & Dragons board game, and a murderous underground of pedophiliac cultists committing Satanic Ritual Abuse (SRA) at day care centers across the country. Numerous investigations, lawsuits, arrests, trials and convictions resulted, all driven by a medieval mythology made newly relevant in the late Twentieth Century.

The long-term consequences of the occult wave and its aftermath continue to resonate. No matter how farfetched or inherently groundless most of its premises were, they were presented with a conviction that was often persuasive: in the wake of a devastating world war and a supremacy of reason that seemed to have climaxed with the Bomb, the unreasonable was once again attractive. It still is. Certainly the graphic depictions of urban diabolism in Rosemary's Baby, of demonic possession in The Exorcist, and of the present-day significance of ancient scripture in The Omen, have made outlandish claims in politics and economics a little less outlandish; certainly the intellectual intrigues offered by the notions of unusual life forms, inexplicable disappearances, and ancient astronauts have made incredible reports of government conspiracies and celebrity scandals that much more intriguing; certainly the richly entertaining and imaginative—though usually specious—occult of the 1960s and 70s promoted a public suspension of disbelief which has become a seemingly permanent quality of our societal character. The next time a website, advertiser, or (ahem) presidential candidate cites wishful thinking as hard statistic, junk science as proven fact, or paranoid fantasy as viable policy, we do well to remember: the Devil's in the details.