Ronald L. Feinman is the author of Assassinations, Threats, and the American Presidency: From Andrew Jackson to Barack Obama(Rowman Littlefield Publishers, August 2015). 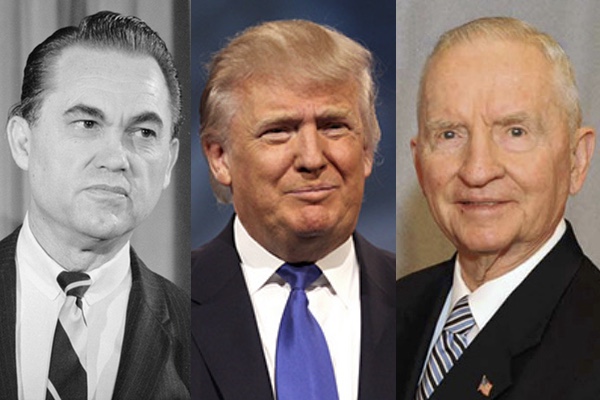 On the surface, one would think that Trump is more like Perot, a billionaire with unlimited funds who was campaigning to change America’s direction, particularly on the issue of the burgeoning national debt. Perot showed insensitivity toward African Americans and other minority groups, and showed instability in his own personality, as when he withdrew from the race and then re-entered it. His support was high enough in public opinion polls, however, that he was permitted to participate in Presidential debates with President George H. W. Bush and Arkansas Governor Bill Clinton, although at the end, Perot ended up winning no states, and therefore, no electoral votes, although winning 18.9 percent of the total national popular vote, the second highest percentage ever in American history, just behind former President Theodore Roosevelt’s 27.5 percent of the vote Progressive (Bull Moose) Party candidacy in 1912. As controversial as Perot was, he never, however, caused the kind of national division that George C. Wallace achieved in 1968, and that it appears that Donald Trump is creating now in 2016.

Wallace won five Southern states in 1968, and 46 electoral votes, the second best third party performance in American history behind TR’s 1912 third party candidacy, which won six states and 88 electoral votes. Wallace also won 13.5 percent of the total national popular vote, the fourth best performance ever in American history. The question is whether there is any possibility of Donald Trump drawing support on the scale of TR or Wallace were he to run on a third party line.

Certainly, IF Trump is the GOP Presidential nominee, he will win most of the South (Wallace territory) and other traditional Republican states, but would have no possibility of winning enough electoral votes to be elected President. Whether as a third party candidate, he could match TR or Wallace in winning five or six states and somewhere between 46 and 88 electoral votes seems highly unlikely.

George C. Wallace may have helped to elect Richard Nixon in 1968, while Ross Perot may have helped to elect Bill Clinton in 1992. Donald Trump represents a candidacy that can destroy the Republican Party as we know it, and elect Hillary Clinton, or even Bernie Sanders, as President. Whether the campaign of Donald Trump can do long term damage to the whole American political system is the more worrisome issue to ponder.