Why We Need an American Environmental History 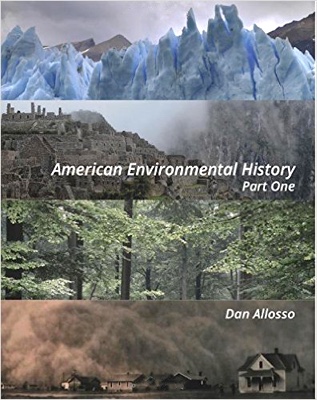 I didn't think there's a really good general Environmental History textbook for undergrads, so I wrote one based on the American Environmental History course I teach at UMass/Amherst. My issue with the texts available is they dwell too much on historiography and the story of Environmental History and not enough on what happened, which I think makes them more suited to grad seminars than undergrad surveys. I think it’s really important that students who would normally just take a Gen. Ed. US History class become exposed to a past that includes the environment. So I’ve written a concise survey that covers the whole thing, from prehistory to the present.

But in addition to being a revision of American History, my text also seeks to right some wrongs. The first chapter is about American Prehistory (what happened before Columbus arrived), so at the end I decided to explore how mainstream history textbooks have dealt with this period. When I surveyed the college textbooks on my shelf, I decided to call this little section "Challenging American History." I began my introductory chapter by mentioning that as new information becomes available, history changes. That effect is illustrated in textbook coverage of American prehistory, but it’s more than that.

In most older American History textbooks, the story began in 1492. While some archaeological data available today was unknown to earlier historians, many were just not particularly interested in Indians or prehistory. Pre-Columbian America was considered remote, unknowable, and irrelevant. Lately, textbook authors have tried to say something about pre-Columbian America. For example, in the 1987 edition of his classic textbook, American History, Richard N. Current devoted four pages to his description of America before Columbus. Current said Native Americans shared a common Asian ancestry that enabled Europeans to think of them all as a single race, although he acknowledged “natives had no reason to consider themselves part of one race or culture.” Current described the introduction of old world crops like sugar and bananas that “Indian tribes in time learned to cultivate,” but he failed to mention that they had independently developed their own staple crops long before Europeans arrived. Current commented that Indian farming “would often seem crude to Europeans” without explaining that most of the time the European disdain for native practices arose from their profound ignorance of the environment and climate of their new home.

But that was the 80s, you’re thinking. Surely things have changed. Unfortunately, not as much as you’d expect. In his extremely popular and critically lauded 2011 textbook Experience History, James West Davidson and his team of co-authors gave just three paragraphs to the arrival of humans in the Americas. Davidson sets the tone by calling the people who came “nomads,” highlighting the term in one of the textbook’s few uses of bold-face type. “Nomads” is a code-word often used to suggest that Indians never had quite the same relationship with the land that whites do, and thus had no claim of “ownership” of their territories. White Americans throughout history have called the Indians nomads; a college history textbook should explain the term rather than just repeating it.

Describing pre-Columbian agriculture, Experience History mentions, “pioneers in Mesoamerica began domesticating squash 10,000 years ago.” But in spite of this, the text claims most Indians were simple hunter-gatherers who “continued to subsist largely on animals, fish, and nuts, all of which were abundant enough to meet their needs and even to expand their numbers.” Davidson characterizes the Adena and Hopewell cultures as “peoples who did not farm,” in spite of the fact they lived in cities of tens of thousands of people. He explains that Indians didn’t learn to farm in the Pacific Northwest because “Agriculture was unnecessary in such a bountiful place.”

Davidson does acknowledge that the modern world’s most important staple crop, maize, was developed by Indians – but this is how he explains it:

Modern-day species of corn, for example, probably derive from a Mesoamerican grass known as teosinte. It seems that ancient peoples gathered teosinte to collect its small grains. By selecting the grains that best suited them and bringing them back to their settlements, and by returning the grains to the soil through spillage or waste disposal, they unintentionally began the process of domestic cultivation. 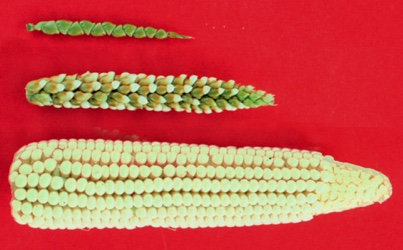 Creative Commons image of transition from teosinte to maize "Maize-teosinte" by John Doebley - http://teosinte.wisc.edu/images.html. Licensed under CC BY 3.0 via Commons.

The problem with Davidson’s description, beside the fact that it portrays early American farmers as bumbling idiots, is that in spite of being written only a few years ago it doesn’t engage with the abundant archaeological information available about early American agriculture. There’s no doubt that corn comes from teosinte. That’s clear from the plant’s genome. And Davidson suggests that a multi-generational process that changed teosinte, a self-seeding native grass, into maize, a hybrid that needs humans to plant it, was an accident. This claim is ridiculous and obscures the fact that ancient Americans knew what they were doing and had the long-term cultural capital to do it.

Experience History does its best to trivialize early America’s contribution to the modern world. In spite of admitting that “plants domesticated by indigenous Americans account for three-fifths of the world’s crops” today, Davidson manages to make it seem like that’s no big deal, and was really almost an accident. Davidson’s discussion of ancient American farming ends with a chart of the “Place and Timing of Pioneering Plant and Animal Domestications.” Southwest Asia tops the list, with the development of wheat, peas, olives, sheep and goats. All these developments are dated to 8500 BCE. Next comes China, with rice, millet, pigs and silkworms, dated 7500 BCE. New Guinea and the African Sahel are next, followed finally by Mesoamerica and the Andes & Amazonia, which produced corn, beans, squash, potatoes, manioc, turkey, llamas, and guinea pigs “by 3500 BCE,” which is nearly six thousand years after archaeologists date the development of maize, potatoes, and cassava. At best, this is an error that a reputable team of historians should never have let slip into their textbook. At worst, it’s a throwback to Eurocentric histories of an earlier era that tried to minimize the tragedy of colonialism by suggesting there just wasn’t that much happening in the Americas before Columbus.

Davidson concludes his coverage of pre-Columbian America by observing that “a few centuries before European contact … the continent’s most impressive civilizations collapsed.” Davidson says the “sudden” and “mysterious” disappearance of cultures like the Mayan, Olmec, Mogollon, Hohokam, Anasazi, and Cahokian was due to “a complex and still poorly understood combination of ecological and social factors.” In other words, through a mysterious combination of ecological mismanagement and social ineptitude, Indians “went into eclipse by the twelfth century…[and] had faded by the fourteenth,” making room for whites from Europe. That’s a bit too convenient. It almost echoes Boston theologian Cotton Mather’s famous explanation in Magnalia Christi Americana of how Providence had cleared the woods “of those pernicious creatures, making room for better growth.”

As you can imagine, I'm self-publishing my textbook. Look for it on Amazon.