Juan Cole is Director of the Center for Middle Eastern and North African Studies at the University of Michigan. He maintains a blog on US foreign policy and progressive politics, Informed Comment. His newest book is, The New Arabs: How the Millennial Generation Is Changing the Middle East (Simon and Schuster). This post originally appeared on Informed Comment. 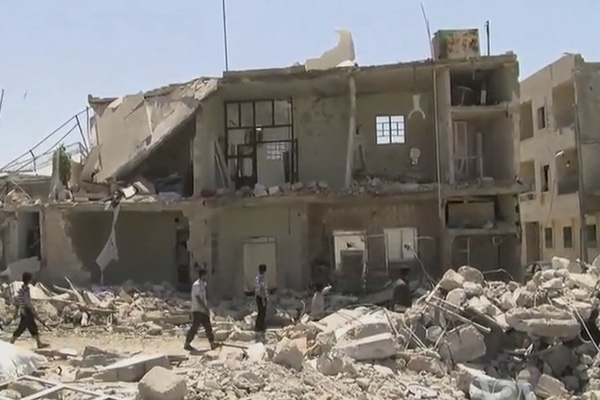 My own feeling is that the US engagement with the Middle East is likely to remain so intense only for another two decades or so. As fossil fuels are replaced with renewables, the outsized role that the oil Gulf plays in world affairs will decline. The region is otherwise relatively low in resources (though apparently its phosphate could become more valuable over time). The Suez Canal will remain a strategic consideration, and the US domestic connection to Israel, while it may weaken because of the latter’s turn to fascism, will not entirely attenuate. President Obama’s instinct that the economic and diplomatic future of the US is primarily in the Pacific rim is probably correct but 20 years premature.

1. The Syria civil war is a source of instability in the world and needs to be brought to a close. Although there are no good military options for the United States in Syria, that the civil war has increasingly taken on the character of a proxy war between Russia & Iran on the one side and Saudi Arabia-Turkey on the other presents opportunities for diplomacy. There appears to be a split in the US establishment, with the Pentagon and its intelligence agencies such as the DIA opposed to the Saudi-Turkey plans for Syria, but with the CIA under John O. Brennan essentially a sidekick to Saudi policy. President Obama has an unfortunate tendency to stand back from such struggles until the last minute. He needs to tell Brennan to stop arming the so-called “vetted” rebel groups with T.O.W. anti-tank and other powerful weaponry, since every evidence is that these munitions make their way to al-Qaeda and Daesh (ISIS, ISIL). As an honest broker, the US could work with Russia & Iran to seek a transition away from Bashar al-Assad and one-party Baath rule, toward elections in which Sunni Syrians would gain representation. The Russia-Iran plan of keeping the regime in place and rolling back the rebels is impractical and ahistorical; the regime has lost its legitimacy. But the Saudi-Turkey plan of turning multicultural Syria (maybe 14%-18% Shiite and 5% Christian and 10% leftist Kurds and 60% secular Sunnis) into a Taliban emirate is also impractical (and monstrous, since the other half of the population would end up ethnically cleansed). It is clear now that neither side is likely to win a complete victory and years more fighting are unlikely to turn rural Sunni religious people into Baathists or Alawite Shiites into Salafis. Only by a negotiated end to the civil war and national elections can Syria be restored to order. Previous such conflict zones have been able to transition, if not to order, to a much less parlous situation, and there is no reason Syria cannot. Obama needs to put enormous pressure on Riyadh/ Ankara and on Moscow/Iran to get them to the negotiating table. It isn’t his instinct to buck a close ally or to put his own prestige on the line, which is why his Israel-Palestine diplomacy never went anywhere, but Syria is an even bigger threat to global order and indeed, to our civil liberties because of the terrorism emanating from it.

2. Obama’s strategy in Iraq is finally showing some success, with the recapture by a retrained, US-backed Iraqi army of Ramadi this week. The Ramadi campaign enlisted Sunni fighters alongside the national army and excluded the hard line Shiite militias, a key political necessity if Sunni Ramadi is to brought back into Baghdad’s orbit. With the Daesh loss of Samarra, Tikrit, and the oil refining city of Beiji, and with the loss of Ramadi, it really only has some smaller cities like Falluja and Hit, plus the major metropolis of Mosul. It seems clear that Daesh will be rolled back militarily and territorially over the next year or two, even if it is likely to remain a potent terrorist organization.

But President Obama and the US foreign policy establishment must not content themselves with rebuilding the Iraqi army and giving air support to it on the battlefield. Iraq has fallen apart politically. In part this collapse is a result of Bush-era favoritism for the religious Shiites and Kurds. The US now has some leverage again in Iraq, and should use it while people there think Washington is needed to push for a new grand national bargain. The Iraqi constitution needs to be rewritten, by Iraqis, to avoid the perpetual hung parliament produced by recent elections (a Kurdish bloc, a Sunni bloc and two Shiite blocs, each with a fourth of seats, all of whom despise one another and refuse to form a coalition, guarantees gridlock.) Measures need to be implemented to encourage parties to seek voters from a wide range of ethnicities. Shiite-dominated Baghdad needs to have a South Africa-style reconciliation with Iraqi Sunnis. The petroleum wealth needs to become more transparent and be more obviously invested throughout the country (I was in Baghdad about 3 years ago and couldn’t see any evidence of new construction!) As with Syria, outside powers such as Iran and Saudi Arabia need to be convinced that Iraqi social peace is in their interest. If the US does not move swiftly to try to get a new social and political bargain in Iraq, then after Daesh is defeated it will just fall apart all over again and new global security threats will emanate from it, as is the case with a similarly unreformed Afghanistan.

3. President Obama, having taken on the Israel lobbies over his deal with Iran about constraining their nuclear enrichment activities, should go further. A civil war is brewing in the West Bank, and the possibility for large scale ethnic cleansing of 2.5 million stateless Palestinians is growing. Jerusalem is becoming a global flash point that could roil the entire Muslim world. Israel’s squatting policies in the West Bank and large scale theft of Palestinian land, while denying the Palestinians citizenship in a state, is unique among evil state policies in the world. (There are other places where an unwanted government is occupying people; but in all those cases it has extended citizenship to the occupied population. Israel is the only major occupier to keep its captives stateless and completely without the rights of citizens). Israel’s policy of attempting to gradually erase even the 22% of Palestine left in 1949 from history and completely replace it territorially and demographically with Israel is monstrous and impractical, and causes enormous headaches for the United States, not to mention promoting attacks on this country because we are implicated in this evil. President Obama should simply stop blocking UN Security Council resolutions condemning predatory Israeli policies in Palestinian territory, and allow the world body to sanction Israel in the same way that Iran was sanctioned (the difference being that Iran was never proven to have done anything wrong). Obama can simply instruct Samantha Powers not to veto resolutions passed on the Palestine issue by the overwhelming majority of the UNSC; Washington does not even have to sign on to the resolution or acknowledge the imperatives of the Geneva Conventions and other instruments of international law. It can just declare neutrality. It is a simple matter but would change everything, and it is wholly in Obama’s arena of authority.

4. The US should distance itself from the Saudi-led war in Yemen, which has involved indiscriminate bombing of civilians, and put pressure on Riyadh to come to a negotiated settlement with the Houthis and the loyalists of deposed president Ali Abdullah Saleh. If the Yemen war goes on, millions will be displaced, adding to the world refugee crisis, thousands could starve or thirst to death, and al-Qaeda in the Arabian Peninsula could end up ruling entire provinces (it is the most determined of the al-Qaeda affiliates to attack the United States and the West, and was implicated in the Charlie Hebdo massacre last January).

5. President Obama has admitted that he and his allies erred in intervening in Libya and then just more or less walking away. No attempt was made to bring the militias into a national army, and little support was given elected parliamentarians. Civil society was not strengthened. Now Daesh has a slender toehold in some coastal towns. What I can’t understand is why this reflection on the president’s part does not produce new Libya policy. As far as I can see, Washington has continued to distance itself from the outcomes in that country, some of which are very dangerous. Amazingly, the diplomatic track in Libya via the UN has been having some tentative success. But the US needs to do more. It is called policy-making.

6. The U.S. government should get serious about promoting public diplomacy in the Middle East and the Muslim world. Some large proportion of antagonistic attitudes toward the US are born of bad US policy, as in Palestine. But some of it is ignorance or conspiracy theories. Most Iraqis think that the US is actively helping Daesh in Ramadi and Mosul, which is daft but a common and deeply rooted conviction. Egyptians seem to think they narrowly avoided seeing the US partition their country. People don’t know very much about the real United States. Because of security concerns, US embassies have become fortresses and diplomats have much less opportunity to interact with local nationals. I don’t think that the US government itself is very good about getting its message out. But if Qatar can fund an excellent YouTube current affairs channel like AJ+ for Millennials, why is the US unable to do so? Why aren’t contracts let for public diplomacy to our academic National Resource Centers, where US expertise about foreign languages and cultures is concentrated, instead of cutting their already meager budgets? I’m not saying they should be enlisted in propaganda, just in level-headed presentation of the realities (AJ+ is not notably ideological). You would think this is already being done. It to my knowledge is not. I pointed out when I was running the Global Americana Institute that most key texts in US political thought can’t even be found in Arabic, and that is still largely the case. It is bizarre to me that few others even seem to care.

7. The administration needs to be substantially more pro-active in combating the wave of bigotry and racism washing over American politics. Hatred of Muslim, Latinos and African-Americans is boiling over into hate crimes, with severe potential foreign policy implications. President Obama has, I think, often held back because he does not want to be seen as a racial partisan or feed the flames of the birthers’ fevered conspiracy theorists. But the situation is now too perilous to let such considerations reign. We all saw what happened when Ike Eisenhower was hesitant to take on the McCarthyites directly. President Obama has to ask himself, what would the Rev. Martin Luther King say in these circumstances? And then say it. Despite his reputation as a great orator, I haven’t heard a good speech from Obama in a long time. He has Muslim relatives. He got the Latino vote. He is an African-American. It is time he stood up for them, and for all of us with a major address and a set of policies. Since the conservatives have passed all those laws protecting people’s religious rights, the Department of Justice should establish a task force to see that Muslims’ rights are not being interfered with by local government. And Federal law already prohibits discrimination against people on grounds of race; but after Ferguson we know that there are entire towns functioning as a Casino for the wealthy white population and taking 3% for the House from the African-Americans. Aside from denouncing it in a white paper, what has the DOJ really done about these race scams?