How the NRA is harming American Security

As I write, the full story behind the heinous San Bernardino shootings, which left 14 dead and 17 wounded, is still not known. The names of the two shooters have been released, which may or may not be very pertinent to the incident. It may have been a matter of someone going postal over his work situation. There may be wider implications, though at the least it seems clear that this was workplace violence linked to some sort of grievance. We are all devastated for the families. But “praying” for them, as the politicians will say they are doing, won’t forestall further such massacres, or make us more secure.

One of the many wise things in the Qur’an is verse 13:11: “God will not change the condition of a people until they change it themselves.” 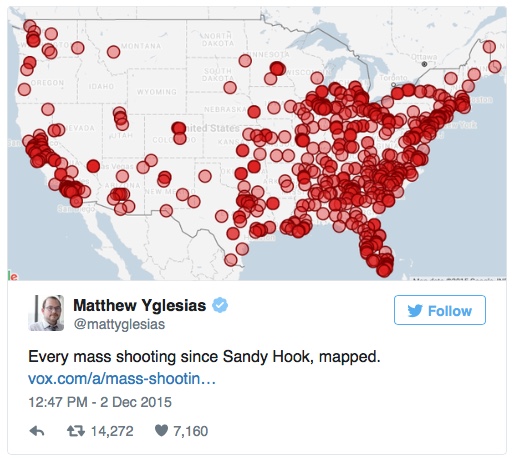 What must not be lost sight of is that the shooters had legally bought assault rifles, and it was the assault rifles that allowed them to commit this carnage. That is, whatever else this incident may have been, it was first and foremost a mass shooting, enabled by the arms’ manufacturers having bought our national legislators to ensure their profits take precedence over our safety. While politicians and pundits make hay with the threat of “terrorism” (which they carefully racialize), the fact is that Americans are, as a matter of everyday life, far more at risk from gun crime, white supremacists, and mass shootings than they are from al-Qaeda-style terrorism. 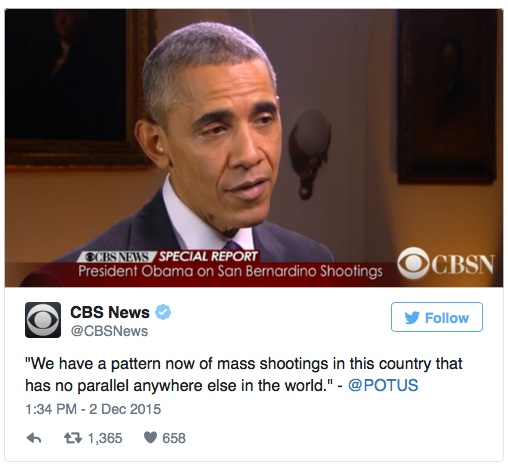 But the shootings also underline at how much risk the assault weapons put us. In most countries, terrorists are blocked from having military-style weapons. They can sometimes smuggle them in, but not always. That is why mass shootings are vanishingly rare in all other economically advanced countries compared with the US.

I wrote at Truthdig last summer:

“In 1994, responsible national legislators including Sen. Dianne Feinstein of California crafted, and President Bill Clinton signed into law, a federal ban on the manufacture and sale to ordinary civilians of semi-automatic rifles and of ammunition drums with more than 10 rounds. Semi-automatic rifles fire every time the trigger is pulled (they are not machine guns, which can go on firing as long as the trigger is depressed). They can, however, be configured to fire dozens of rounds rapidly and to be easy to reload.

The legislators faced enormous opposition, which they softened by putting in a sunset clause. The law was then allowed to lapse in 2004 by the George W. Bush administration. While it is true that some criteria used for assault weapons in the 1994 law contained loopholes that were sometimes sidestepped by manufacturers, it is not true that no tighter legislation could be crafted now.

Assault weapons are what make mass killings possible. They are not used in most of the roughly 14,000 murders committed every year in the United States. But they are used in half of all mass killings. Mass killings are traumatizing for the nation in a way that most murders are not. Individual murders are often not reported in detail on television news, and most are not national news.

A mass killing of 20 children, such as at Sandy Hook Elementary on Dec. 14, 2012, (along with six adult staff members), each riddled with multiple bullet holes, produces powerful social anxieties. This is a kind of evil worth avoiding, as Australia’s Parliament decided in the 1990s, and it can be avoided, as Australia has demonstrated. No hunters would be inconvenienced by an assault weapons ban, and if they are firing 100 rounds in rapid succession at deer, they should be publicly shamed.

. . . a society flooded with assault weapons is at special security risk. All U.S. military personnel and police are potential targets. NRA apologists argue that deaths of police by assault weapons did not decline after the 1994 ban, but they neglect to say that the ban applied only to new rifles and left the previously purchased stock of such weapons in place. Moreover, unscrupulous manufacturers exploited loopholes to go on making and selling some of the models. Therefore, the ban would have had a significant impact on police deaths only over many years, and only once the legislative language was tightened. For all we know, the experiment was on the verge of having such an impact when it was abruptly ended.”

In fact, the inability of American communities to protect themselves from the proliferation of military-style assault weapons is a further sign of how corrupt the American political system is. Four arms manufacturers and their retailers, who make billions by spreading around the means for this chaos, have been allowed to buy your congressmen, who should be making laws that you want, on your behalf. Instead, they are serving a handful of billionaires.