Jeremy D. Popkin is the William T. Bryan Chair of History at the University of Kentucky and the author most recently of From Herodotus to H-Net: The Story of Historiography (2015). 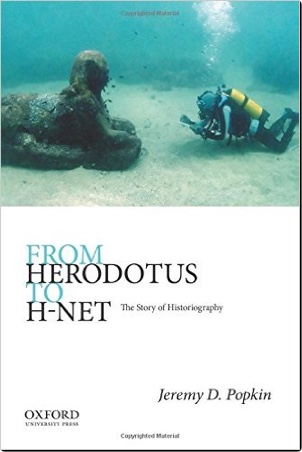 Very few students decide to major in history because they are passionate about historiography—the study of how historians study the past. When my undergraduates tell me what drew them to history, they usually mention an interest in some dramatic era, like the Middle Ages, or some social cause, like the Civil Rights movement. Relatively few historians are seriously interested in historiography either. The historiography classes that most departments require undergraduate majors to take are often classified as “service courses,” thrust on the youngest faculty members on the grounds that they still remember the obligatory seminar they took in graduate school. The privilege of teaching the corresponding seminar for graduate students is somewhat more sought after. Nevertheless, in contrast to other graduate-level courses, it is rare for graduate seminars in historiography to be taught by professors who have actually published in that field, and the purpose of such courses is hardly to encourage students to devote themselves further to it. If my seminar ever did inspire a graduate student with such an idea, I would feel ethically obliged to inform her that in nearly forty years as a professional historian, I have never seen a job ad for a historiography specialist.

If neither students nor faculty are really that interested in historiography, why are courses in the subject required in almost every undergraduate and graduate program? Indeed, at both levels, historiography courses are usually the only courses that all history students have to take. One hint to the meaning of these courses is that they are also often the only classes history departments offer where enrollment is restricted to history students. Historiography classes are experiences meant to teach students “how to think like a historian,” which also means learning to think differently from others. Initiation into the mysteries of historiography is a rite of passage that turns students into members of the tribe and sets them apart from the worshippers of other gods. In historiography classes, students learn the names of our glorious ancestors—Herodotus, Sima Qian, Ibn Khaldun, Edward Gibbon, Leopold von Ranke, Marc Bloch, Natalie Davis—and our current sages. At the same time, they learn about our clan’s version of “Game of Thrones,” the family feuds that divide post-colonialists from defenders of western civilization, linguistic turners from unswerving believers in the sanctity of facts, but that unite historians because we are the only ones who know the different players and what motivates them.

Nevertheless, it can be hard to make historiography interesting to students, let alone to that mythical creature, the “general reader.” A gifted teacher like the late Gerald Feldman, the specialist in Weimar Germany who, perhaps unwillingly, taught the undergraduate historiography seminar I took at Berkeley in 1968, can make texts like those of Thucydides and Guicciardini come alive, but history, despite its concern for the past, is hard on its elders. The works of Dante and George Eliot, Plato and Spinoza may be old but they are not out of date, as even the best historical writing of their day now is. And yet historiography classes that expose students only to today’s historians or that avoid long catalogues of the scholars of the previous two millennia by adopting an abstract thematic approach risk conveying the anti-historical message that the past does not matter compared to keeping up with the latest fashions.

The challenge I set myself when I succumbed to Oxford University Press’s invitation to write an introduction to historiography was to make our discipline’s past relevant to its present. I am not one of those who sees history as being “in crisis,” despite the undeniably lamentable state of the academic job market. On the contrary, interest in the past is as lively as ever, but it is taking new forms: television mini-series, dramatic museum exhibitions, online blogs and forums. Even as the forms of historical expression mutate, however, issues that were raised centuries ago continue to resonate. When filmmakers make up dialogue for their historical characters, they follow in the footsteps of Thucydides, who famously wrote that the invented speeches in his Peloponnesian War were “what, in my opinion, was called for by each situation.” Vico’s claim that we can understand the human past better than we can understand the natural world because we share the passions of the people of the past is directly relevant to today’s debates about artificial intelligence: it raises the question of whether computers will ever take an interest in history.

In From Herodotus to H-Net: The Story of Historiography, I have tried to present different approaches to history in an even-handed manner, and above all to enable readers to understand why historians have gone about the seemingly simple task of recording events in so many different ways. Writing the book obliged me to think anew about ways of representing history that I had tended to reject, especially once I had adopted the persona of an academic scholar. My own interest in the past undoubtedly owes as much to the colorful Edwardian illustrations in The Nursery History of England, Elizabeth O’Neill’s 1912 classic that some British friends of my parents gave me when I was a child as it does to the monographs that inspired me in graduate school. I hope the book makes a case for the value of academic scholarship of the sort to which I have devoted my own life, but I hope it also does justice to other ways of exploring the past. Above all, I hope it will help make historiography classes exciting and relevant, both for the students who take them and for the instructors who teach them.