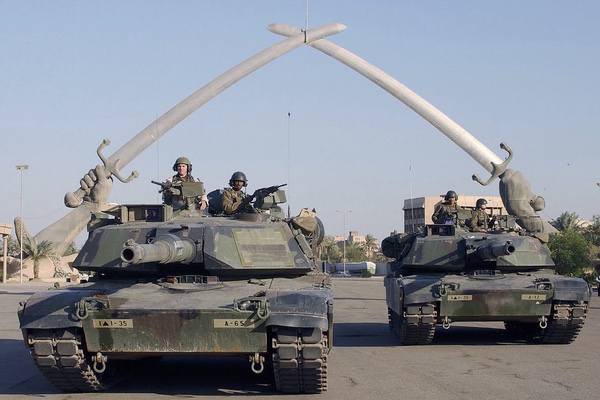 U.S. soldiers at the Hands of Victory monument in Baghdad - Wikipedia

During my job talk for a historian position in the Modern Middle East at California State San Marcos (CSUSM), I was told that one in ten students is an active duty service member, a veteran, or their dependent. I immediately assumed all of the students would be Fox News-watching, conservative, and pro-Iraq War. How would they feel about being taught by an Iraqi-American, whose relatives were affected by the disruptions that ensued after the Iraq War of 2003, who would be critical of the war? Five years after teaching at this university, I realize that not only had I been guilty of a blanket assumption about those “military” students, but those students would have something to teach their professor.

On the very first day of class of my course, “Modern History of the Middle East 1700-present,” I decided to open with a question to ascertain how many students were veterans: “Besides myself, how many of you have been to my native Iraq?” Five out of 35 students raised there hand. “I assume in a military capacity. You didn’t go as tourists?” They all shook their heads.

I paused trying to think what to say next. “Ok … this question provides our first lesson. Middle Eastern history explains why so many in our Northern San Diego community, even veteran students sitting amongst you, ended up in Iraq in 2003.”

I then explained how in our course we would progress to 2003, by analyzing how the collapse of the Ottoman Empire, the Mandate Period, oil politics, the eight-year war with Iran, the 1991 Gulf War, and US foreign policy after the Cold War served as preludes to the war in 2003. By involving the veterans in the first few minutes of class I had made Middle Eastern history tangible and visible to them.

Five years later, I open that class on the first day with the same question. The class has become particularly popular with the student veterans, as they gain a greater understanding of the historical dynamics and centuries-long trajectories that culminated in their deployment to Iraq, and Afghanistan.

The next risky move was asking if the veterans want to share the individual histories of their deployments with the class. I had already provided Iraqi voices post-2003 as primary sources. I decided to facilitate the veterans’ voices in class, albeit carefully, since talking about subjects could be traumatic for them.

After they have done that, I situate their experiences within the past history of the region, and the future of Iraq and Afghanistan. In the case of both of these countries, they learn how a generation of British soldiers attempted to conduct the same nation-building exercise in Afghanistan in the 1880s and in Iraq in the 1920s, and faced the same difficulties, where groups like the Taliban or Iraqi insurgents, existed even back in those historical epochs. I have often been told by these veterans that this exercise meant more to them than the platitudes of “Thank you for your service” they received upon homecoming. By giving their individual deployments a greater historical context and meaning. It even helped them cope with the friends they lost during their deployment.

Soon the veterans started to provide me material from their deployments, which I collected as primary sources. One of the most fascinating is an “Iraq Culture Card,” which illustrated how the US military sought to encapsulate the complexity of Iraqi society into a pocket-sized glossy card. It included a few phrases in Arabic, how to spot a “terrorist,” and conveniently divided Iraq’s people into Shi’a, Sunnis, and Kurds. The students learned from the veterans in our class that this card was the mere extent of cultural training they had been given before going into Iraq.

The other course that I offer is “Modern War and Society,” and the fact that veterans, active-duty, and ROTC students take this course is in and of itself a learning experience for other students. When discussions came up about the wars in Afghanistan and Iraq veterans tended to be jaded about how politicians used patriotism to rally a nation for war. The ROTC students, who were about to enter the military, pushed back at the veterans’ comments. I, as an instructor, merely served as a referee. In this case, without intervening, I let the students with a military background demonstrate that the US armed forces are not a monolithic entity. Within our own class we had a student who was a former paratrooper, who grew out his hair, rode his skateboard to class, and now volunteers to create sustainable living communities for his fellow veterans. He is also a vocal a critic of US foreign policy. An ROTC student often debated his opinions, and told the class that she anxiously anticipated her military service.

Most of my students prior to this class assumed that the history of war is what is provided on TV: great generals, battles, and tactics. By having veterans speak, I try to show that while the violence of war might be more dramatic, what happens after a war can be just as historical. I situate our campus veterans’ lives with other veterans, such as the author JRR Tolkien, a World War One veteran, who wrote the Lord of the Rings trilogy as a reflection of his experience in the trenches. Other veteran legacies include Erich Maria Remarque’s All Quiet on the Western Front to anti-war paintings from Otto Dix, which helps students see German voices that challenge the notion of a homogenous, militaristic German society on the eve of World War Two. Of course they also learn the dangers of society when it fails to help veterans upon their return from the front, as two veterans of the same war, Adolf Hitler and Benito Mussolini, led Europe to the Second World War.

Students affiliated with the military had diverse political beliefs, nuanced worldviews, and were open to engaging with primary sources and texts that are critical of their deployments and chronicle the negative effects of the wars on Iraqi and Afghan society. Not only do they serve as students who can teach their fellow classmates, they taught me to a lesson about the diversity of opinions and backgrounds of those who served, and continue to serve with the military.