This Is What Helped Make Churchill Churchill

Simon Read is an award-winning former newspaper reporter and the author of seven previous works of narrative non-fiction published on both sides of the Atlantic, including War of Words, The Case That Foiled Fabian, and Human Game. His latest book is Winston Churchill Reporting: Adventures of a Young War Correspondent (2015). 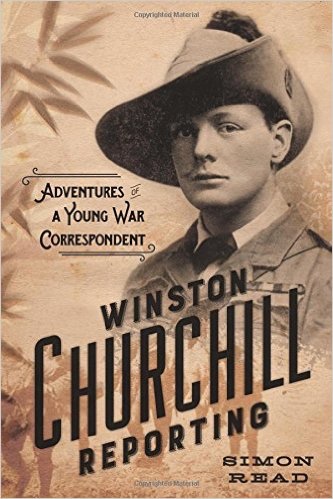 When I decided to write a book about Winston Churchill, I knew I was exploring territory traversed by countless others before me. Why add yet another title to the mountain of literature that already exists? Because Winston Churchill, complex and multi-faceted as he was, offers so many angles from which we can explore his life.

What most likely comes to mind when one thinks of Churchill is Great Britain’s unconquerable war leader and all that entails: cigars, the never-surrender spirit, the V-for-victory salute, and the rousing oratory that still packs an emotional punch 70-plus years on. Most books on Churchill either focus on this period, or cover his vast life in its entirety—the latter having to paint in broad brush strokes if only because there’s an overwhelming amount of information to convey.

So much has been written about Churchill that it’s impossible to uncover anything wholly new about the man—but it is possible to present him in a light many people might not be familiar with. The common perception of Churchill is that of politician—not a man of action. But, between the ages of twenty and twenty-five, Churchill was a globetrotting journalist whose exploits rival any Indiana Jones adventure.

Spanning the years 1895 to 1900, he covered four conflicts of empire: the Cuban rebellion against Spanish rule, a bloody Pashtun uprising on India’s North-West Frontier, the Anglo-Egyptian re-conquest of the Sudan, and the Second Boer War in South Africa. His experiences were both enthralling and horrific. Take, for example, the Battle of Omdurman on September 2, 1898. Churchill was commissioned with the 21st Lancers and took part in an epic cavalry charge against several thousand Sudanese warriors. He described the carnage in the Morning Post seven days later:

The Dervishes stood their ground manfully. They tried to hamstring the horses. They fired their rifles, pressing their muzzles into the very bodies of their opponents. They cut bridle-reins and stirrup-leathers. They would not budge until they were knocked over. They stabbed and hacked with savage pertinacity . . . Many horses pecked on landing or stumbled in the press and the man that fell was pounced on by a dozen merciless foes.

Such episodes shaped the leader he was destined to become and gave birth to several popular Churchillian vices. In Havana in 1895, he developed his passion for Cuban cigars. Two years later, on the North-West Frontier—in what is now the border region between Pakistan and Afghanistan—Churchill came to love whisky, preferring the spirit over the more mundane army camp offerings of cold tea and tepid water.

Most importantly, his years reporting on war shaped his complicated views on the subject. The complexity and scope of war, and the adrenaline rush of combat enthralled him, but he abhorred the blood cost. When he initially went to Cuba as a 20-year-old junior officer to cover the island’s uprising against Spanish rule, his longing for adventure was a prime motivation. The fighting he saw there rarely became anything more than a skirmish and only stoked his appetite for more. On the North-West Frontier, however, where he fought in battles of a more savage nature, he began to truly understand war’s human toll.

After one particularly bloody encounter with the region’s Pashtun tribes, Churchill started to see war as a shoddy and dirty business. It was, in many ways, a strange game, bringing fame and honor to some, the thrill of adventure and the priceless gift of experience, while it robbed others of everything they had. Staring at a row of freshly dug British graves that would soon be lost to time and memory, the majesty and glory of war struck Churchill—in his own words—as nothing more than “the unsubstantiated fabrics of a dream.”

This evolving point of view took on a sharper clarity the following year when he covered Kitchener’s Sudanese campaign. Following the Battle of Omdurman, Churchill walked among the Dervish casualties and was appalled by what he saw. Kitchener’s Anglo-Egyptian army, equipped with artillery and Maxim guns, had slaughtered a much larger enemy force armed with obsolete spears and rifles. Bodies littered the desert plain. The dead, in some places, lay two or three deep and completely obscured the ground. Many wounded writhed among the corpses rotting beneath a blazing sun. Wrote Churchill for the Morning Post:

There they lie those valiant warriors of a false faith and of a fallen denomination, their only history preserved by their conquerors, their only monument their bones—and those the drifting sand of the desert will bury in a few short years.

Having witnessed such carnage, perhaps it’s not surprising that Churchill—as Britain’s eventual warlord—favored magnanimity in victory. It’s a stance he ultimately came to believe in while covering the Second Boer War in South Africa; and it’s vital in better understanding the world leader he would become.

Boers—or Dutch farmers—had called the Cape home since the seventeenth century and had no desire to live under the British, who had designs on the gold-rich country. The two sides went to war in 1899. The Boers were fighting in defense of their families and homeland—the strongest motivation for war that exists. Yet, by 1900, things were not going well for the Dutch. Churchill, then a young reporter of 25, was already forward thinking and able to conceptualize the big picture. A wounded animal will still fight—and often pose a greater risk—when cornered. Men, Churchill believed, are no different.

In an article that proved unpopular back in Britain, Churchill argued steps had to be taken to ensure the Boers would easily accept defeat and should not be pushed to desperation. The threat of punitive sanctions or a difficult peace would only convince the Boers they had nothing to lose by continuing to fight. Churchill urged the British not to let animosity and pettiness in victory overshadow the glory with which they had fought. It is here we see a strong glimmer of Churchill the future war leader, who, in victory, urged magnanimity toward Germany. At Casablanca in 1943, Churchill privately opposed President Roosevelt’s proclamation that the Allies would accept nothing short of Germany’s unconditional surrender. Indeed, the moral of Churchill’s Second World War memoirs could easily have applied to the Boer conflict:

“I have always urged fighting wars and other contentions with might and main till overwhelming victory, and then offering the hand of friendship to the vanquished,” he wrote in later years. “Thus, I have always been against the Pacifists during the quarrel, and against the Jingoes at its close.”

Thus, Churchill’s critics who dismiss him as a warmonger are oversimplifying the man. His views on conflict were far too complex and multi-faceted. What is a certainty, however, is that Churchill’s experiences as a correspondent shaped his understanding of war and honed his ability to communicate that understanding to others. Through his reporting and the subsequent books he wrote, he learned how to relate the battlefield experience to everyday people. As prime minister in 1940, he would use to his advantage what he knew of war to convey to the British public in Shakespearean tones the horror and glory of their most desperate hour. In doing so, he shaped a legacy that continues to loom large over history.