The Confederate Flag is Out – So Why is Holocaust Denial Still in at Amazon?

Chad Gibbs is a Shuflata Fellow at the History Department, University of Nebraska at Omaha. 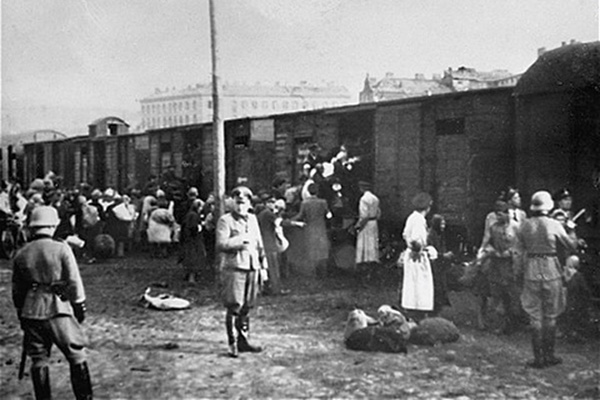 Jews being loaded onto trains to Treblinka at the Warsaw Ghetto's Umschlagplatz, 1942 - Wikipedia

Not long ago, online giant Amazon correctly acted to ban all confederate flag merchandise from its website. I was surprised this week to find that motivation to quickly remove items that promote hate seemingly does not apply to Holocaust denial at the company.

In the wake of the racist Charleston church shooting, Amazon followed other major American retailers in removing confederate flag merchandise from sale on its platforms. In a story on the removal of these items, CNN Money cited Amazon’s ban on, “offensive products” including those, “that promote or glorify hatred, violence, racial, sexual or religious intolerance or promote organizations with such views.”

Still, if an Amazon user searches “Treblinka” on Amazon video, a DVD or streaming offering fitting almost all of these categories is the first result. The director of this so-called documentary is the same man convicted on multiple criminal charges stemming from a 2007 physical attack on then 78-year-old Nobel Laureate, Auschwitz survivor, and author, Elie Wiesel.

The supposed production company behind this director’s “revisionist” lies is listed among active Holocaust denial organizations by the Southern Poverty Law Center. Readers who wish to confirm this should look under New York State in SPLC’s online listing of these groups.

Holocaust denial does not have, or deserve, a place at the table. There is no debate between intelligent people—of any creed—over the veracity of claims made by self-styled “revisionists.” The producers of this hatred-masquerading-as-documentary-film do not have claim to representation or equality in the marketplace of ideas. The comments on these videos by Amazon customers are even more distressing for this reason. In the first day I knew that this product existed, two out of three reviews already voiced support for Holocaust denial. Amazon must realize that to sell such merchandise, as a company so well known and part of the American consumer mindscape, is to lend virtual credence and respectability to the producers of this garbage and their anti-Semitic supporters.

As a graduate fellow at the University of Nebraska at Omaha focused in Holocaust and Genocide Studies—specifically the history of resistance at Treblinka—I find it truly disgusting that this is what comes up when an individual goes to one of America’s largest retailers and searches for historical products on one of Nazi Germany’s worst extermination camps.

The same CNN Money story profiling Amazon’s decision to get rid of confederate merchandise also states that the company “has had something of an on-again/off-again Nazi problem over the past several years.” Removing Holocaust denial merchandise should certainly be part of the company’s efforts to deal with this issue, and the possibility of profiting from hate in general.

An email to the Public Relations Department at Amazon has, as yet, received no response. As a responsible retailer, Amazon should remove these items and the myriad of other Holocaust denial books and pamphlets that clutter their marketplace. The company should take a stand against legitimizing hate speech through inaction. That action should be come now, not later.