The Alarming Signposts that this Could Be a Crazy Year

Jonathan Rose, a professor of history at Drew University, is the author of The Literary Churchill: Author, Reader, Actor and The Intellectual Life of the British Working Classes. 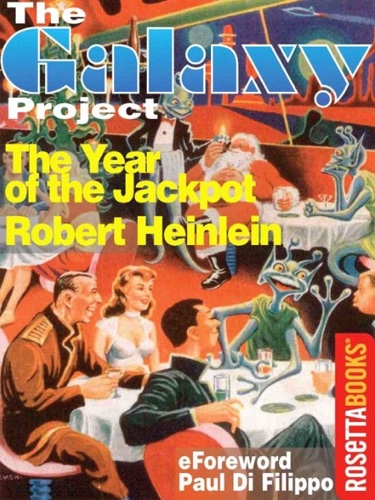 I was fifteen, it was 1968, and seeking refuge from adolescence and the turmoil of the times, I often curled up with science fiction. When your world spins apart, you can find some respite in alternate worlds. And so I did – until one story wrenched me back to the chaotic present.

It was “The Year of the Jackpot,” in which Robert A. Heinlein stunningly foresaw it all.

The story had been published in 1952, but it conjured up the annus mirabilis/horribilis that I could see flashing before me every day: nudity in public, nudity in the churches, transvestites, draft-dodgers, cigar-smoking feminists, bishops promoting sex education, ludicrous lawsuits, a “startling rise in dissident evangelical cults,” and the Alabama state legislature proposing to abolish physics (not the teaching of physics, no, they wanted to repeal the laws of nuclear physics). Heinlein even predicted that weird antiwar protesters would be arrested in Chicago and disrupt their subsequent trial. In the story, a bespectacled statistician (they always wear glasses) discovers that all varieties of human behavior move in waves, and now (as he plots on graphs) all the waves are cresting at once. “It's as clear as a bank statement,” he warns. “This year the human race is letting down its hair, flipping its lip with a finger, and saying, 'Wubba, wubba, wubba."'

If “The Year of the Jackpot” resembled 1968, it also anticipated the crises we face today. Heinlein imagined a world where the climate is shifting, Californians water their lawns in spite of a historic drought, the government is broke and the loans are coming due, “zombie-like professional models become accepted ideals of American womanhood,” the Republican and Democratic parties split asunder, the old anti-immigrant Know-Nothings make a comeback, Russia and America are on a collision course while an “undeclared World War continues its bloody, blundering way at half a dozen spots around a tortured globe.”

For historians, prediction is a mug’s game, but I’ve studied the graphs (metaphorically) and I can’t help but think that the waves are about to peak once again. The Chinese economy is slowing and will probably drag the rest of the world into a slump – and as a distraction, China just might project her naval forces into the western Pacific. Vladimir Putin has already pounced on the Ukraine and Syria, and may push his luck in the Baltics or the Arctic. The European Union, swamped with Greek debt and refugees, could go the way of the League of Nations and the Holy Roman Empire (both of which seemed like good ideas at the time). The centrist political consensus that united European elites is already giving way to radical populism on the left and right. Just when you think Middle East turmoil couldn’t get worse, the entire region could descend into an Islamic civil war. We may face another financial meltdown, having never really recovered from the last one, and this time outraged voters would probably (1) make another round of bailouts politically impossible and (2) demand blood. It’s entirely possible that, a year from now, Donald Trump and Bernie Sanders could face off in a presidential election. Even if neither of them wins their party’s nomination, they could transform American politics – just as Eugene McCarthy did. This scenario assumes and hopes that we will see nothing like the assassinations of 1968, though Twitter now buzzes with threats against Trump. But if yet another black suspect is killed by a white police officer, there could be urban rioting on a scale that we last witnessed almost 50 years ago.

Mind you, I’m not predicting that all of the above will happen. But everywhere we look there are bombs on hair triggers. If only half of them explode, they could set off a chain of global crises beyond the control of our governing elites. And if that happens, popular anger could well exceed what we saw in 1968, when most Americans still trusted the government and the media. Corrosive suspicion of “the system,” which back then was limited to small cadres of campus radicals and black militants, today pervades all sectors of society, left and right. If the system crumbles, there is no telling what social forces will be unleashed.

Once every generation or so, history abruptly floors the accelerator and leaps off the road. In 1789, 1848, 1917, 1933, 1968, and 1989 regimes fell, astonishing events erupted daily, ideologies realigned, new movements were born, past experience was rendered obsolescent and irrelevant. Each of these revolutionary years took contemporaries by surprise: only after the smoke had cleared did historians find the underlying causes that should have been obvious to everyone.

If you ask whether the Bastille was stormed because bread prices were skyrocketing, or because Louis XVI was inept, or because his tax system was hopelessly corrupt and his government couldn’t pay its bills, or because the armed forces had been humiliated in military adventures, or because the Enlightenment had undermined faith in the established order, or because the lower classes wanted an end to feudalism, or because the middle classes wanted power, most historians would answer: “Sure.” Revolutions never have single causes; they take off only when multiple dysfunctions coincide in a perfect political storm. And right now storm clouds are gathering everywhere. If indeed we once again hit the historical jackpot, it will be frightening and enthralling to watch. Brace yourselves.