How Gun Control Came to Britain 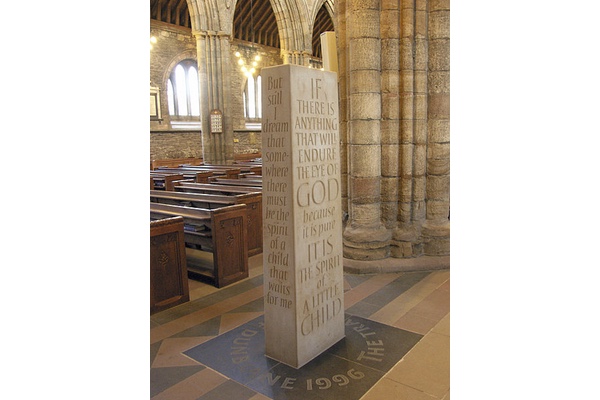 The Standing Stone sculpted by Richard Kindersley to commemerate the events in Dunblane of 13th March 1996 - "Dunblane Standing Stone" by PaddyBriggs - Own work. Licensed under CC BY-SA 3.0 via Commons.

Columbine, Virginia Tech, Fort Hood, Tucson, Oak Creek, Aurora, Sandy Hook, Washington Navy Yard, Isla Vista, and Emmanuel African Methodist Episcopal Church. The names roll off, one after another. And now we have another: Umpqua Community College. In 2015, there has been more than one mass shooting – defined as four or more people shot in one event – for every day of the year. Umpqua was the 45th school shooting this year and the 142nd since Sandy Hook in December 2012.

How do you move from performance to conversation?

Gun control came to Britain on March 13, 1996. That morning, Thomas Hamilton, a former scoutmaster, failed shopkeeper, and paranoid loner entered the gymnasium of the local primary school in Dunblane, a small town in central Scotland. Using two pistols and two revolvers, Hamilton shot dead sixteen five-year olds and a teacher before turning the gun on himself.

Hamilton, a gun enthusiast, owned his weapons legally. Despite concerns over his mental state, his registration was never revoked.

In Britain, it is customary to hold an official inquiry after a great disaster. These inquiries, led by a judge or a senior civil servant, take several months to investigate, deliberate, and propose reforms. Normally, governments respond after a report is issued.

After Dunblane, the inquiry created a space for the public to craft its own narrative about gun control. Discussion occurred in several different ways. News media began calling for greater restrictions on gun ownership. Popular coalitions organized around the idea of gun control. Two movements, The Snowdrop Petition and the Gun Control Network, coalesced around the idea of a handgun ban and gathered significant political and media support.

The official inquiry into Dunblane, the Cullen report, offered several recommendations: greater cooperation between police forces, vetting agencies, and gun clubs over the fitness of individuals to possess firearms; requirements that gun certificates be granted only if an individual offered good reason for doing so; and closer scrutiny of people working with children. Most significantly, the report also recommended extensive restrictions on handgun ownership. The report, as well as the legislation that followed, reflected widespread public sentiment.

The Firearms Acts (1997), passed by successive Conservative and Labour governments, required tighter regulations on gun registrations and banned the private ownership of all handguns, with the exception of historical weapons, shotguns, and weapons owned by prominent public figures in Northern Ireland. Illegal gun owners faced prison terms of five to ten years. A compensation and amnesty campaign led to 162,000 weapons and 700 tons of ammunition being handed in to the police. Payouts from gun buyback campaigns reached £150m.

British and American approaches to guns differ. Despite Britain’s long history of violence overseas, there has never been a domestic gun culture. Nor has there ever been a right to bear arms. There are just two million registered firearms in Britain, compared with an estimated 300 million in the USA.

There are structural similarities between Britain in 1996 and contemporary America. Reformers used the space created by the Cullen report to direct change in Britain. In the US, campaigners are entering the space left by congressional inaction. The Tea Party, Occupy Wall Street, and Black Lives Matter all show how popular movements can transform the national conversation. How can efforts at reform be built on? Public debate should begin in the aftermath of a massacre, when interest in gun control is highest. By largely leaving alone the rights of rural dwellers, farmers, and hunters, British reformers neutralized a potential bloc of opposition. In the US, conversation about gun control is too often contained in social media bubbles. Could including the many gun owners who want change in discussions about reform prise support from the lobbyists who control the gun debate?

History matters as well. British debates employed familiar rhetorical tropes: 19th century liberal philosophy balancing individual rights and the public good. Here, the belief that the second amendment allows gun proliferation is a recent judicial aberration. How could US reformers reclaim a language of individual rights that balances gun ownership with the right to go to a shopping mall, concert, school, college, work, or a place of worship without fear of being shot?

In Britain, a popular coalition delivered change following an unexpected catastrophe. We expect frequent mass shootings; we have also come to expect reform. How can we harness popular sentiment for change and engage in a conversation that reaches across social divides?