Philip T. Hoffman is Rea A. and Lela G. Axline Professor of Business Economics and Professor of History at the California Institute of Technology and the author of Why Did Europe Conquer the World? (Princeton Economic History of the Western World, 2015). 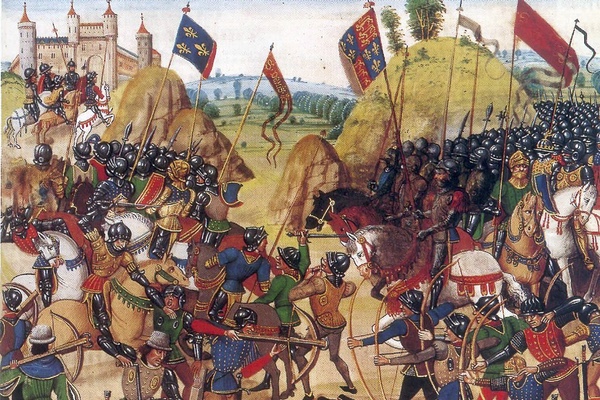 Battle of Crécy (1346) between the English and French in the Hundred Years' War.

In two short years, ISIS has taken over a huge swath of territory in Syria and Iraq—and driven millions of refugees out into the Middle East and Europe—by relying on extortion, plunder, and volunteers who willingly fight to the death. That is the fuel feeding its conquests, which must seem strange to modern observers accustomed to armies supported by taxes. But conquest sustained by pillage and by troops who eagerly wage war is hardly unusual, for history is full of examples of armies that have captured territory and toppled states even though they had no tax revenue—just the booty of war and soldiers who pursued fortune, glory, or salvation on the battlefield. 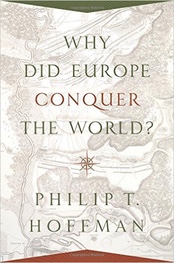 Perhaps the most striking example comes from medieval western Europe, where bands of warriors fought for wealth, honor, and—eventually—victory over enemies of the faith, even though they were not backed by a fiscal system that could impose permanent taxes. Despite the lack of tax revenue, they seized property on the fringes of Europe and in the eastern Mediterranean, where they won a fearsome reputation for violence and insatiable greed, among both Muslims and Greek Christians alike. And although their conquests did not all survive, they did have had huge long-term consequences. In fact, the centuries of this medieval warfare were the ultimate cause behind the European conquest of the world—the ultimate reason why by 1914 Europeans had gained control of 84 percent of the globe.

To understand why, we have to analyze the effect of all the wars in medieval Europe under what we would now call warlords. The incessant fighting selected leaders who were victorious in war, for as with ISIS today, they attracted the followers. The conflict also created enduring enmities between the groups of followers that eventually hardened into political borders. In the long run, that ill will (and not physical geography, as Jared Diamond and others have argued) was what kept any single leader from unifying western Europe in the sort of enduring empire that prevailed for centuries in China.

With no powerful emperor putting an end to the strife, it persisted, and by the sixteenth century, some of the leaders finally gained the ability to impose heavy taxes to fund their armies. They became the dominant powers in early modern Europe. The taxes they levied were monstrous by early modern standards—10 to 40 times heavier than in China in the late eighteenth century—and virtually all the money they collected went to fight wars. Yes, they built palaces too, but even the enormous palace of Versailles cost French King Louis XIV less than 2 percent of his tax revenue. Nearly all the rest went to the military or to pay off debts run up during past conflicts, because monarchs in early modern Europe had evolved (to use the statesman and political philosopher Machiavelli’s words) to “have no object, thought, or profession but war.” Elsewhere, rulers of premodern states might spend a large fraction of their budget on transportation infrastructure or famine relief, but not in Europe.

All the money showered on the military gave the early modern leaders in Europe millions of chances to buy, try out, and improve the technology they used in their wars—the technology of gunpowder weapons, from firearms and cannons to armed ships and fortifications that could resist bombardment. And because their countries were small, they could easily learn from their rivals’ mistakes with gunpowder technology or copy their improvements. They therefore pushed gunpowder technology further than anyone else in Eurasia. Other Eurasian powers may have fought as much as the western Europeans did, but they did not spend as heavily on gunpowder technology or have as easy a time learning from their enemies. The result was that by 1700, western Europe dominated gunpowder technology, even though it had been invented in China and used throughout Eurasia. Europe’s military dominance grew even more overwhelming in the nineteenth century, when useful knowledge from the Industrial Revolution added to what rulers learned from war.

Mastery of gunpowder technology was crucial for the European conquests, because gunpowder weapons allowed small numbers of European conquerors to win wars in far away lands. Thirteen brigantines (galleys armed with cannons) proved essential, for instance, when Hernán Cortés captured the Aztec capital of Tenochtitlan, because it lay on an island in the middle of a lake. Cortés needed the brigantines both to bombard the city and to cut off its supplies, and it is no wonder then that he had them carried in pieces across fifty miles of rugged terrain for the final assault on Tenochtitlan, and no wonder either that the Aztecs did their utmost to destroy the boats. And the brigantines and the rest of the European military technology also won Cortés thousands of allies among Native American groups that were hostile to Aztec rule.

In Europe, entrepreneurs were free to use gunpowder technology in private expeditions of conquest and exploration, and they were actually encouraged to do so by Europe’s political leaders, particularly after the Spanish found riches in Mexico and Peru. Elsewhere in Eurasia, by contrast, rulers restricted private use of gunpowder technology and hindered private expeditions of conquest. One reason for this difference was the lack of tax revenue in the centuries before European rulers finally developed fiscal systems: with no tax money to pay officials, Europe’s kings made a habit of turning to private entrepreneurs who would profit from doing the monarchs’ bidding. Another and equally powerful reason was the widespread belief among Europeans that their continent was virtually the poorest part of the known world, so it made sense to encourage expeditions of conquest. But that was a delusion that other Eurasians by and large did not share.

The result was that by 1914 Europeans had taken over the globe. No one would have bet on that outcome a thousand years earlier, when Europe was poor, violent, politically chaotic, and by almost any yardstick, hopelessly backward. But all the fighting in Europe ultimately created powerful states and military dominance. Will the same happen with ISIS? Almost certainly not. But we should be careful about the long run effects of strife fueled by plunder and volunteers seeking glory or salvation on the battlefield. It can have surprising long run consequences.