The Shameful Response to the Refugee Crisis in Europe

Maurizio Albahari is the author of Crimes of Peace: Mediterranean Migrations at the World’s Deadliest Border (University of Pennsylvania Press, 2015). Albahari’s recent editorials on migration in Europe have been published by the Orlando Sentinel, CNN, and Fox News. 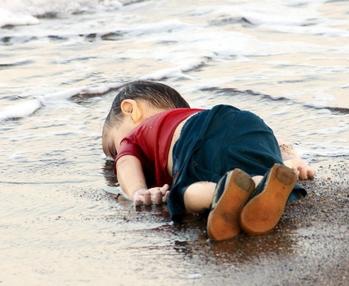 "Alan Kurdi lifeless body" by Source (WP:NFCC#4). Licensed under Fair use via Wikipedia.

Tearful observers imagined angelic wings would lift Alan Kurdi, from the sand of the Turkish shore all the way to paradise —for his life was already in limbo. The world stared at the graceful piety of the tall police officer and of Alan’s sleep in his arms. But this is not Michelangelo’s Pietà. It is the BodrumPietà, and there is no easy redemption. A crisis, especially when it is an epochal one, should foster critical reassessment and innovative provisions—or we risk losing the right to call it a crisis. 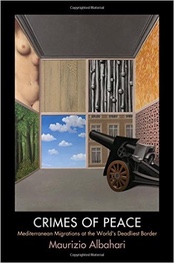 The United States, leading by example, has pledged to resettle additional refugees over the next few years. To curb refugee deaths, something else is feasible in the short term: an internationally coordinated moratorium on air carrier sanctions. In other words, refugees should be able to buy a plane ticket toward their safe haven, and air carriers should not be fined for selling those tickets. What is right does often prove feasible with effort and goodwill; but is feasible politically palatable?

Alan was to become somebody’s pupil, friend, and fiancé; a citizen of the world and of a country that will need to be reconstructed. He joins instead a lost Syrian generation, and the many Iraqis, Eritreans, Nigerians, Somalis, and others who are perishing in countless shipwrecks. Afghanis are leaving behind another “forgotten emergency.” Access to asylum applications is left to the exorbitant discretion of smugglers and of the elements, rather than to rule of law.

Families sell everything to pay for a smuggler. But this is not a new form of slavery, and people would be happy to purchase the cheap convenience of a ferry, or the reassuring safety of a flight. They leave behind harrowing stories, and in turn face the exploitation of being smuggled, and the chaos of Europe’s proliferating fences. It is not these refugees who are “desperate”—they have a vision, and much hope. What is desperate is the frantic, awkward attempt of passing the buck to a neighboring country—except that it is real persons being pushed around, often with much shortsightedness.

Concern with governmental inaction is partly misplaced then. European governments are rescuing thousands of people at sea. In the Aegean alone, at least 5,000 people arrive every day on the Greek islands close to Turkey. But governments, over the past two decades, have also made it impossible for people to safely apply for asylum without enriching smugglers, as I explain elsewhere. Considerable portions of the EU external borders have been fenced, including between Bulgaria and Turkey, Greece and Turkey, and Hungary and Serbia. Barriers are proliferating between EU countries and within European cities, railway stations, and ports. The ensuing crisis is tearing apart Europe, the trust of its citizens, and the lives of stranded people. A moratorium on carrier sanctions would make some of this unnecessary.

When somebody arrives at an international airport or seaport, in Turkey as elsewhere in the region, a valid visa is a prerequisite for their journey to an EU destination (and to other liberal democracies). With rare exceptions, non-compliant transportation carriers risk fines up to €500,000, confiscation of the means of transport, and suspension or even withdrawal of their operating license. We take all of this for granted. But as early as 1995, the UN Refugee Agency suggested that carrier sanctions, generally intended to prevent the arrival of unauthorized economic immigrants, would also interfere with the ability of persons at risk of persecution to gain access to safety and apply for asylum. A decade ago, the EU Parliament expressed similar concerns.

As Syria, northern Iraq, Eritrea, and Afghanistan are not a safe home to many of their own citizens, a moratorium on carrier sanctions is appropriate, until better policies take shape. Critics will argue that this is not enough, or conversely that it goes too far. At least half a million people could arrive in Europe each year; many more could be unable or unwilling to do so. Among the new arrivals, some would be granted temporary protection, rather than full refugee status—many do intend to return home anyway. Others would be repatriated.

The reality, of course, is that this massive unregulated mobility is already happening, but at an excruciating cost. We can act in more rational, humane, and proactive ways. Suspending carrier sanctions would contribute toward a more orderly arrival for those seeking a safe haven; a more dignified treatment; a more capillary effort at “debriefing” and fingerprinting people, as required by EU policies. And it would make a substantial dent in smugglers’ costly monopoly.

A moratorium on sanctions would remove an obstacle to refugees’ coordinated mobility, rather than constituting an active airlift. Nevertheless, historical examples of the latter serve as proof of humanitarian and geopolitical initiative at difficult times. One may recall Operation Safe Haven for Hungarian refugees (1956-57), and the Orderly Departure Program (1979-99) allowing Vietnamese refugees to settle in the United States and other Western countries. The geopolitical context is clearly different, and the proliferation of conflicts is resulting in the proliferation of displacement. But as Chancellor Merkel has aptly recognized, “the fundamental right to asylum … knows no upper limit.” And citizens in Europe are demonstrating they are willing to assist refugees.

A moratorium on carrier sanctions would require continued cooperation. Parties would include UN agencies, local governments, and aviation, police, asylum, and border authorities of Turkey, of other countries in the region, of the EU, and of every country intending to share responsibility for refugees. Legal experts, human rights actors, and intergovernmental organizations would need to discuss and deliberate. It could be laborious and far from perfect, with counterarguments, negotiations, and countries opting out. Indeed, we would not need politics if we always had a consensus. Still, there is the urgent need for leaders to be sincere with citizens and to acknowledge reality. Being more proactive is unlikely to make things worse: almost half a million people already arrived in Europe by sea this year; 2,962 people died at sea.

The whole world knows what Alan and his family left behind, and what they were looking for: freedom, security, justice. Do we have the political courage to follow up on that knowledge? Can we afford such an intimate knowledge of refugees, and act accordingly? The next shipwreck might just take from us the right to shed tears.