Get Used to It Europe: Homogenous States Are a Thing of the Past 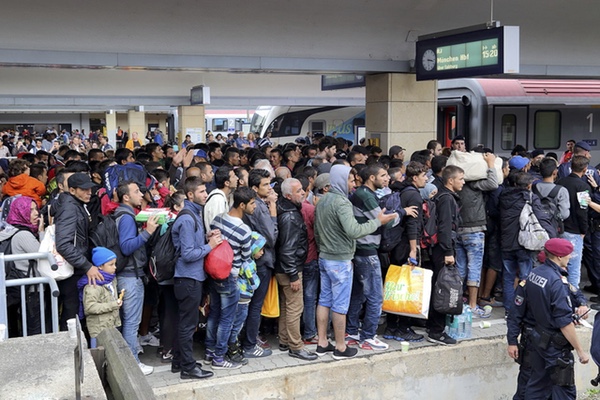 Wien Westbahnhof railway station migrants on their way to Germany

If you were transported back to Europe in 1900 and asked educated citizens to describe the ideal political arrangement, what they would outline to you is a homogeneous nation-state: France for the French, Germany for the Germans, Italy for the Italians, and the like. They would note exceptions, but describe them as unstable. For instance, at this time the Austro-Hungarian Empire was, ethnically, a very diverse place, but it was politically restless. Come World War I, ethnic desires for self-rule and independence would help tear this European-centered multinational empire apart. In truth, even those states that fancied themselves ethnically unified were made up of many regional outlooks and dialects, but the friction these caused was usually minor enough to allow the ideal of homogeneity to prevail. The ethnically unified nation-state was almost everyone’s “ideal state.”

This standard of homogeneity started to break down after World War II. After this war the foreign empires run by many of Europe’s homogeneous states were in retreat and in their wake came a slew of new nations in Africa, Asia and the Middle East. Simultaneously, the impact of the end of empire on the European nations was to have their own homogeneous status eroded. For instance, when Great Britain set up the Commonwealth as a substitute for empire she allowed freer immigration into England for Commonwealth citizens. The result was an influx of people of color from former British colonies in Africa, India-Pakistan and the Caribbean. A similar thing happened as the French empire crumbled. With its demise many North Africans, as well as Vietnamese Catholics, went to France. Later, Turks would go to Germany, a preference that reflected the close relations between Berlin and the defunct Ottoman Empire. Then came the formation of the European Union (EU) in 1993, which facilitated the flow of labor across European borders. Now citizens of one EU state could go and work in any other member state.

In other words, the twenty or thirty years following World War II marked the beginning of the end of the Western homogeneous state.

Now we may be witnessing the final stage of that demise. The present refugee crisis resulting from wars raging in Iraq, Syria, Afghanistan, Yemen and Libya, among other places in the Middle East, has set in movement millions of displaced people. Many of these refugees are heading for Europe.

While initially most of the European Union leaders showed some willingness to take in substantial numbers of refugees, strong resistance from Hungary, Romania, Slovakia and the Czech Republic caused a pause in the effort. This was a predictable moment. All established populations, even relatively diverse ones, fear that their cultural norms and economic advantages will be threatened by large waves of new immigrants. At the extreme, one finds ideologically and religiously defined nations such as the Arab Gulf states and the allegedly Westernized Israel (itself a product of an overwhelming refugee invasion of Palestine) refusing to take in any of the present refugees. Even in a country such as the United States, which is historically built upon the inflow of diverse populations, it is politically difficult to open borders to new refugees in need. Initially, announcing a willingness to allow an embarrassingly small number of 10,000 refugees to enter, Washington has increased that to 100,000 between now and 2017.

Getting back to the European scene, the pressures now building on the borders eventually resulted in a EU decision, allegedly binding on all its 28 member states, to speed up the intake screening process for refugees and distribute the accepted numbers across the EU countries. How many will ultimately be allowed into Europe is still unclear. If the leaders of Europe are smart about it they will go beyond merely symbolic numbers. If they are not, then there will be concentration camps on their borders and eventual violence that will mark a dark period in their supposed civilized histories. Controlled or not, in the end, many of the refugees will probably find a way in.

There is ironic justice in this prospect. After all, the wars that have uprooted so many were triggered by Western intervention in the Middle East. One can thank George W. Bush and his neoconservative colleagues (along with British allies) for the 2003 invasion of Iraq. That action set loose the forces that have subsequently displaced the people who make up the bulk of today’s refugees. To this can be added the 2011 NATO intervention in the civil war in Libya, in which France, Italy and the U.S. led the way. This action has prolonged the anarchy in that country and is one of the reasons that 300,000 people attempted to cross the Mediterranean Sea in the direction of Europe in 2015 alone. At least 2,500 of them died in the attempt.

It is a testimony to the fact that the average citizen has little knowledge and less interest in their nation’s foreign policies that few in Europe and the U.S. recognize, much less acknowledge, responsibility for the present disaster.

The population in western and central Europe has been shifting in the direction of diversity for the last seventy years, and that of the United States more or less consistently since the nation’s founding. Along with diversity comes a complementary, if perhaps more gradual, shift in culture.

Opposing this historical trend is the fact that anti-immigrant resistance among established national populations is almost a default position. However, this is like spitting in the wind. In the long term, the evolution of populations moves from homogeneity to diversity. It is just a matter of how long the process takes.

Thus, from every angle, ethical as well as historical, the way to approach the present refugee crisis is to allow, in a controlled but adequately responsive way, the inflow of those now running from the ravages of invasion and civil war.

In so doing we should accept the demise of the homogeneous state. Whether it is Germany, France, Hungary, Israel or Burma, the concept is historically untenable and neither raises nor even maintains our civilizational standards. Rather it grinds them down into the dust of an inhumane xenophobia.