John Fea is the chair of the History Department at Messiah College in Mechanicsburg, PA and the author of Why Study History?: Reflecting on the Importance of the Past. 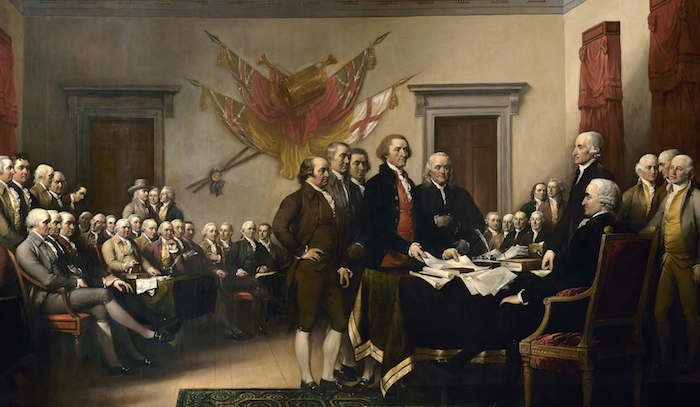 John Trumbull's Declaration of Independence, showing the Committee of Five presenting its work to Congress

In case you haven’t heard, the South Dakota Board of Education has dumped early American history from its K-12 curriculum.

When I heard about this decision, a quote from one of the great nineteenth-century observers of American life came to mind.  During the 1830s a French aristocrat named Alexis de Tocqueville traveled throughout the United States and studied the character of American society.  His observations would later be published in his Democracy in America—a work that is just as important to our national identity today as it was when it first appeared in 1835.

In Chapter Two of Democracy in America Tocqueville laments the way that individualism—an idea at the heart of American democracy—destroys a citizen’s appreciation of the past.

“Among democratic nations,” he wrote, “new families are constantly springing up, others are constantly falling away, and all that remain change their condition; the woof of time is every instant broken and the track of generations effaced. Those who went before are soon forgotten; those who will come after, no one has any idea; the interest of man is confined to those in close propinquity to himself.”

Tocqueville understood that sometimes in a democratic society we become so addicted to the present that we forget where we came from.  We lose touch with history—the subject that provides us with our identity as Americans.

Now that early American history is no longer part of the curriculum, it is very unlikely that a student in the public schools of South Dakota will ever read Tocqueville’s quote.

The decision is also based on a very thin view of citizenship.  How can students understand what it means to be a citizen of South Dakota or the United States without understanding that everything that they encounter in the present is rooted in a historic context?

History is more than memorization.  It teaches students that current events are contingent on the events that came before them.  History teaches us the root causes of the things that happen in our world today.

When students learn about context, contingency, and causation they develop a deeper—more robust—understanding of the world around them.

The study of the American past relieves us of our narcissism and helps us to see ourselves as part of a much larger human story.  As the Stanford historian Sam Wineburg writes, “mature historical understanding teaching us … to go beyond our brief life, and to go beyond the fleeting moment in human history to which we have been born.”  Don’t we want our young people—our future citizens—to understand their world in this way?

Sadly, the students of South Dakota have had the very foundations of American citizenship ripped out from under them.  Think about it:

●  Students will no longer be required to learn about the American Revolution.  How will they be good citizens if they don’t know anything about the ideas and values on which this country was built?

●  Students will no longer be required to learn about the Constitution.  How will they know how the United States government works or about the rights afforded to all United States citizens?

●  Students will no longer learn about slavery.  How will they understand race-relations in the United States without learning about the roots of the Civil Rights Movement and other black protest movements, including Black Lives Matter?

●  What about Native Americans? I would think that any resident of South Dakota should know something about the Indians.  As it now stands, their understanding of Native American history will begin with the United States attempts to drive the Sioux from their lands and will end with Indian reservations and casinos.

●  Without early American history most of the story of the women’s rights movement will no longer be taught.  Goodbye Seneca Falls.  Goodbye Elizabeth Cady Stanton.  South Dakota students will be left with a view of the past in which women were always able to vote.

This all seems worse than the attempts in Texas and elsewhere to change the curriculum to conform to conservative or Christian views of history.

Perhaps we should start thinking about Tocqueville less as an observer and more as a prophet.