It’s Ok to Love your ’64 Mustang, but Here’s What You’re Missing 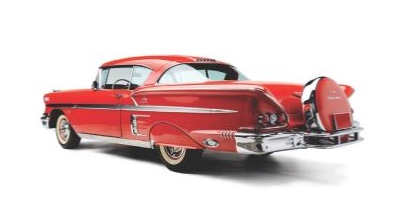 Nostalgia just isn’t what it used to be. For centuries, nostalgia has been about the loss of a familiar place when people moved, or the loss of a way of life when technology and revolutions swept away the accustomed. As Thomas Wolfe famously noted, “you can’t go home again.” But today, we can… sort of… because nostalgia now is largely commodified and can be purchased and possessed. Today nostalgia is often for our childhood encounters with ephemeral consumer goods and for fleeting media moments from our youth. These feelings can be re-experienced by collecting toys, kitsch, and even cars from our early childhoods and youths. We can find these feelings in oldies music, in reruns of TV shows, and even in theme parks that help us recall old cartoons and toys. Modern nostalgia often is built on hopes of reclaiming feelings of childhood wonder or teenage freedom. 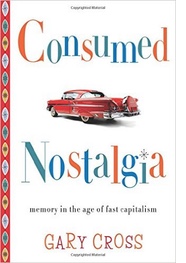 For centuries people have gone nostalgic when they felt the anxiety associated with a rapidly changing or quickening pace of life, but today, as goods and media succeed one another with ever-growing rapidity, even young people in their 20s have a lot to be nostalgic about. The video games, music, and fashions of their teens are already gone. I argue that this change had its roots in the 1930s, a generation after the rise of a consumer culture of rapidly changing clothes, toys, and novelties as well as the invention of modern media (phonograph records and movies especially) that defined the childhood and youth memories of many Americans. This is evident in the beginnings of collections and nostalgic treatments of early twentieth century popular culture. But it accelerated in the 1970s in nostalgia for 1950s music and TV, for example.

It’s easy to mock the guy at old car shows whose pride is in his ’57 Chevy that took years to restore and is just like the one he had at seventeen or the middle-aged woman who proudly displays her Barbie doll collection from when she was 7. But these objects of memory certainly meet a need by helping people recover the past; and collecting can bring together those who have little else in common but a shared memory.

The problem with modern nostalgia isn’t that it longs for the past rather than the present or future; the trouble is that it fixates on stuff and thus short-circuits what memory can do for us. Some of this is probably inevitable. Few of us are mystics and, as in religion, most of us require “relics” to share and help us reach back to the past. But, in the end can commercialized nostalgia meet our needs? My obsession with the commodities of my childhood cannot be shared with my younger brother, much less with my children; they are just different. This longing separates me from communities and pasts beyond my personal experience.

But can’t the modern nostalgic impulse transcend all this? It can if we use things of memory to engage with the past, not merely regress into a romantic memory of childhood “innocence.” If we converse with that past, and bring a full and honest consciousness of our present lives into our encounter with the past, nostalgia can reveal something about ourselves as we are now and also show us how the world has actually changed. Such a conversation with the past might help us get over our obsessions with our childhoods. In fact, nostalgia need not be childish; it can bring us the pleasure of growing in our understanding of ourselves and of the larger world from the vantage point of grown-ups.