Is Donald Trump Another Andrew Jackson?

Mr. Zacher is the author of Trial and Triumph – Presidential Power in Troubled Second Terms. 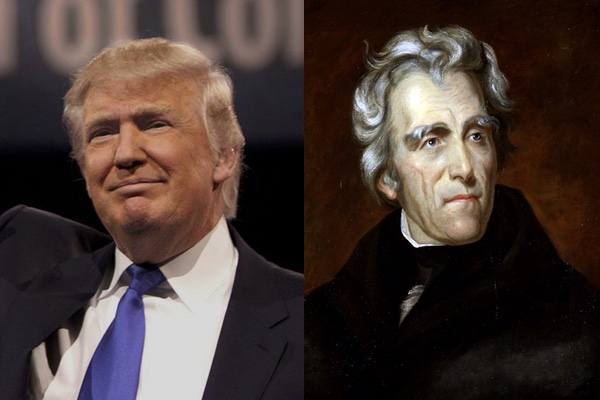 The possibility of Donald Trump becoming the Republican nominee for president and thereafter being elected to that high office elicits an historical perspective. The name that most readily reflects the credentials and character of Donald Trump is Andrew Jackson. The seventh president was not part of the establishment of the Democratic Party that imparted the thoughtful sometimes-scholarly qualities of Jefferson, Madison and Monroe. He was not a member of the Founders. Jackson like Trump was a popular figure of power and success as the general who won the battle of New Orleans. He was a successful lawyer and judge, though known as being hot headed, vulgar and impulsive. He had minimal experience in government serving relatively briefly in the House of Representatives and in the Senate. Jackson entered the political arena at a time of transition and great upheaval in the country. Americans were leaving the comfort of their homes and the country life they knew to work in cities or risking their lives moving to farmlands in the Middle West. This was a rugged, individualistic striving newly enfranchised citizenry who found in the roughhewn outspoken Jackson the personification of themselves. Jackson believed the government was benefiting the wealthy and monopolies to the detriment of the average American.

Jackson clearly represented the views of the majority of electorate during his two terms in office. He met both his and their goal of destroying the Bank of the United States, the institution that carried on some of the functions of the present day Federal Reserve. He and his followers believed the Bank served the wealthy and the monopolies at the expense of the average citizen. Once successful in closing the bank, Jackson established state banks whose easy lending policies led to speculation that ended in a severe depression lasting five years.

Another of his objectives and of the majority of the electorate was the removal of Native Americans from Georgia. Jackson ignored the ruling of the U.S. Supreme Court, which found unconstitutional the State of Georgia law which disposed of all of the property belong to Native Americans. Further, the law ordered them to leave Georgia. Countless thousands of Native Americans were forced to march to the Oklahoma Territory, with many dying along the way.

Andrew Jackson left office a popular president, appearing to have fulfilled the objectives of the rising segment of the population, who were demanding an opportunity to share in the wealth of the nation. They did not blame Jackson for the depression and they were solidly behind the removal of the Native American.

From this historical perspective, the chances of Donald Trump being the Republican nominee and the next president may reside in the degree of discontent there is within the electorate and their belief he has the wherewithal to resolve that discontent.