Did You Know California Requires Professors to Sign a Loyalty Oath?

Marc Stein is the Jamie and Phyllis Pasker Professor of History at San Francisco State University and the organizer of “Rights and Wrongs: A Constitution Day Conference at SF State” (17-18 Sep. 2015). 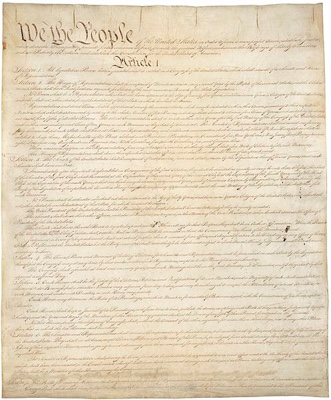 On Constitution Day, the national holiday that commemorates the signing of the U.S. Constitution on September 17, 1787, Californians might want to launch a new free speech movement aimed at repealing or modifying the state’s loyalty oath.

When I first read the oath, I wondered about the reference to “mental reservation.” Aren’t professors trained to have questions, doubts, and reservations about pretty much everything? Did the requirement to “support and defend” the Constitution conflict with SF State’s expectation that I would teach critical perspectives on the history of constitutional law? Could I sign the oath because, paradoxically, the U.S. and California constitutions refer to rights of free speech and expression?

Over the next several weeks, I found myself thinking about which parts of the U.S. Constitution might generate the most mental reservations in California’s professoriate. The three-fifths clause, which stipulated that each slave would be counted as 3/5 of a person when seats were allocated in the House of Representatives? The fugitive slave clause? The 18th Amendment, which banned the manufacture, sale, transportation, importation, or exportation of intoxicating liquors?

Presumably I was allowed to have reservations about constitutional provisions that were later invalidated by new amendments, but what about provisions that are still valid? Could I have reservations about the grammar and punctuation, not to mention the meaning, of the Second Amendment’s “right to bear arms”? Was I allowed to have doubts about the failure to provide Washington, D.C., with voting representation in Congress? Was I permitted to have questions about the Constitution’s system for electing the U.S. president, which yielded defeat for the candidate who won a majority of the popular vote in 2000?

Then I began thinking about all of the prominent politicians and judges, past and present, who would be ineligible to work in California’s public colleges and universities because of the state’s loyalty oath. Most of the Founding Fathers had reservations about the Constitution. Presidents Franklin Roosevelt and Ronald Reagan and retired Supreme Court Justice John Paul Stevens had all called for amending the U.S. Constitution, presumably because they had reservations about it. Most of the current presidential candidates also have declared their support for constitutional amendments.

I also began reading California’s Constitution, which apparently is one of the longest national or state constitutions in the world and one of the most criticized in the United States. As confident as I was that every public college and university teacher in California had read every word of the state constitution before they signed the loyalty oath, I wondered about what had happened to those who had reservations about one or more of its provisions.

In the end, I signed California’s loyalty oath. For those who are curious about how I came to do so, let’s just say that the Fifth Amendment promises me that I cannot be compelled, in any criminal case, to be a witness against myself. Last year, during my first months of teaching at SF State, I enjoyed my proximity to the 50th anniversary celebrations of the Free Speech Movement at Berkeley. This year, it’s time for a new free speech movement, one that will liberate California’s public college and university professors from the state’s loyalty oath.