Peter Zarrow is a professor of history at the University of Connecticut (Storrs) and an adjunct research fellow at the Institute of Modern History, Academia Sinica, Taipei. 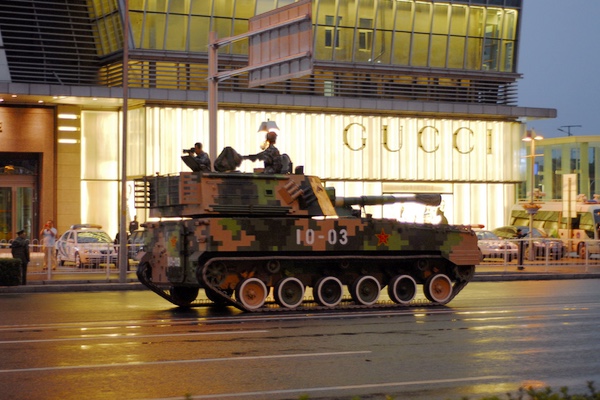 Training exercise for the military parade scheduled for October 1 2009, to celebrate China's 60th Anniversary. The PLZ-05 122mm self-propelled howitzer rolled down Xidawang Lu in Chaoyang district in the east side of central Beijing past the luxurious shopping centre Shin Kong Place.  "Self-propelled howitzer in front of Gucci" by Dan from Beijing, China - Military might in front of Gucci. Licensed under CC BY 2.0 via Commons.

One hundred years ago this month a small journal appeared in Shanghai. Originally called simply Youth Magazine, it soon changed its name to New Youth, and it did much to live up to its name, inspiring a new generation. Moving to Peking University in 1917, New Youth preached “science and democracy,” advocated individual liberty, human rights, and social equality, and rejected the “old and rotten” culture of Confucianism.

The magazine marked the beginning of an intellectual awakening that spread across China’s cities. Even conservatives who wished to retain aspects of Confucianism agreed with much of its vision of a new China. Until 1923 New Youth published essays, translations, news items, poetry, and fiction by China’s leading liberal and radical intellectuals (from 1923 to its forced closure in 1926, it became the official organ of the Communist Party). China has never been able to achieve all the idealistic goals proclaimed in the pages of New Youth, but neither has it been able to suppress them. At least as ideals, they are as much a part of Chinese culture as filial piety and chopsticks.

This is why current efforts to suppress so-called Western ideas will fail, despite the government’s best efforts. China has a massive censorship apparatus and there is certainly plenty of self-censorship, but people continue to push against the boundaries. Alarmingly, since Xi Jinping became president in 2013, activists—such as the “feminist five” last March—journalists and rights lawyers (hundreds over the summer) have been arrested, detained, or simply disappeared. And these are just the known cases. The cases of ordinary workers who wish to organize, peasants who protest land seizures, and ethnic minorities who run afoul of local or national officials number many more. New cyber-security and national security laws are vaguely worded and subject any criticism of the Communist Party to potential legal reprisal.

Schools have become a particular target of the Xi regime. Early in 2013 “Document No. 9” on the “ideological sphere” was circulated to Party members warning against any discussion of such ideas as human rights, separation of powers, and civil society. Some universities have been ordered to install cameras in their classrooms. The Minister of Education is reported to have said earlier this year: “Never let textbooks promoting Western values appear in our classes.” Teachers have been warned not to “smear socialism” or praise the “Western path.”

As Chinese were quick to point out, wasn’t the very Karl Marx who constructed the sociopolitical theory that the Chinese Communist Party purports to follow a Westerner? New Youth did much to introduce readers in the late 1910s and 1920s to the Russian Revolution and Marxist ideals. More fundamentally, it popularized discussions of popular sovereignty, republican institutions, and citizenship. These were not entirely new ideas in the 1910s. They had indeed fueled the 1911 Revolution that brought down the old monarchy. John Stuart Mill’s On Liberty was translated into elegant Chinese in 1903, and Montesquieu’s Spirit of the Laws by 1909. But New Youth went beyond earlier concerns in its concentrated attacks against Confucian doctrines, the patriarchal family, and racial and gender discrimination.

Thus by the 1910s what had been originally “Western” ideas were being integrated into Chinese political consciousness. Democracy, rights, liberty, equality and so forth were henceforth Chinese. There could be (and still are) debates about how suitable they are for Chinese conditions, about the extent to which ancient Chinese thinkers had conceived them centuries ago, and about how modern Chinese thinkers indigenized them—but there is no question that they have been indigenized. Not only are once-foreign ideas now Chinese, but deep-rooted cultural habits promote intellectual autonomy.

Back in the 1920s, the New Youth group soon split into two camps: “liberals” (self-proclaimed pragmatists) and “radicals” (soon to become Communists). But the New Culture movement that they shared in starting has never been forgotten. As the start of a free-wheeling discourse about politics, society, economics, and culture, the movement’s hundredth anniversary is worth celebrating. Many will celebrate it in China, even if celebrations remain low key.

None of this is not to say that Chinese and Western habits of mind are the same. It would be ridiculous to presume that any Chinese simply believe what Westerners believe, whatever that is. But it is equally ridiculous to believe that the ideas so thoroughly discussed in New Youth can ever be eradicated from Chinese thought. Few Chinese want to adopt, say, Western democracy in total. Indeed, while official propaganda grossly exaggerates the defects of the West, Chinese intellectuals can see for themselves the dysfunction of the American political system, its moronic politicians, its failure to grapple with the growing gap between rich and poor, its crumbling infrastructure, and other acute problems. Yet they may also see in such flawed institutions a capacity for self-correction. They rightly take pride in China’s numerous accomplishments while seeking better.

Insofar as Chinese official propagandists today insist that China will take its own course and find a “unique path”—they are surely right. After all, all great countries always do exactly that. But in taking their own course, Chinese people will push against the regime’s strictures and continue to discuss how to build institutions that promise a real degree of popular sovereignty and meaningful citizenship.

Because the entire family of notions associated with democracy, liberty, and rights has become Chinese, they are ineradicable. Indeed, the very categories of “Western values” and “universal values” are incoherent in our thoroughly globalized world. Furthermore, since the 1980s, Chinese have gotten used to freedoms that include the choice of where to live and what job to take, much less whom to marry—a particular focus of New Youth concern—and attempts to barricade off a sacred party-state from the realm of personal freedoms will require ever greater resources.