Albrecht Classen is the author of The Forest in Medieval German Literature: Ecocritical Readings from a Historical Perspective (Lexington Books, 2015). 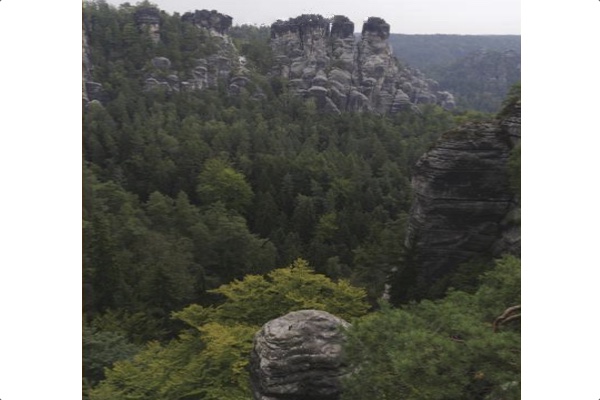 According to a new scientific report there are ca. 3.04 trillion trees growing in the world today. Although this number is considerably higher than previously assumed, the authors of this research project conclude: “Based on our projected tree densities, we estimate that over 15 billion trees are cut down each year, and the global number of trees has fallen by approximately 46% since the start of human civilization” The importance of trees and hence of forests for all life here on earth is undoubted, but we as people have consistently mistreated this natural habitat for our own purposes, thus hurting our own self-interest in the long run. 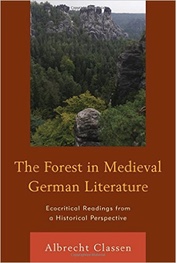 While modern people seem to view the forest just as a playground or an area for physical exercise, medieval poets have consistently approached the forest as a location where the life of their protagonists is taking a decisive turn. This insight can be used as a critical catalyst for the examination of the ecological relationship between people and their environment. It is high time that we study how medieval authors viewed forests from an ecocritical perspective, which will free us from traditional but often rather stereotypical and erroneous concepts about medieval attitudes toward nature.

In my recent book, The Forest in Medieval German Literature (2015), I argue that we can profit tremendously from such an approach in order to gain deeper insights into human attitudes toward the forest as reflected in literary texts. Understanding the relevance of the forest not only for its material purposes, but recognizing also its importance as a staging ground for the individual to grow and to find purpose in this life seems to be, contrary to previous assumptions, a significant concept pursued in the Middle Ages. Ecocriticism allows us, as a new theoretical model, to revisit medieval literature and thus to fathom much more clearly than before how much the individual depended and thrived on the forest, as threatening and dangerous as it often proved to be.

Even though medieval literature seems a far cry from modern-day ecological concerns, we can easily realize how much the forest mattered especially in the Middle Ages if we apply this ecocritical lens toward major medieval texts. Of course, throughout time the forest has served as a significant resource for building material, fuel, and food, but it has also functioned in major ways as an epistemological challenge, as Dante formulated so beautifully at the beginning of his Divina Commedia (1304-1321) where the pilgrim protagonist finds himself lost in the midst of the forest, or rather, in the midst of his life. From here we can easily branch out and recognize how much medieval poets in all languages have struggled hard to come to terms with the forest as a space of terror, of refuge, of childhood or old age, as a religious retreat, or as a space of an alternative lifestyle. Robin Hood easily comes to mind as the one English figure in literary imagination who resorted to the forest from where he could launch his sorties against the evil authorities and help the poor regain a sense of justice.

As countless medieval poets indicate in a wide range of literary genres, the forest offered many different opportunities to explore fundamental issues of human existence. In Sir Gawain and the Green Knight (late 14th century), for instance, the protagonist almost would have died in the winter landscape of the Welsh forests if he had not prayed to the Virgin Mary who then shows him the way to Castle Hautdesert, where he actually faces his penultimate test while the host is hunting outside and symbolically tries to catch him when he is killing specific animals. The forest is frozen and populated only by terrifying beasts, and yet Gawain survives and demonstrates thus his great knightly prowess, which ultimately makes it possible for him to face the Green Knight and his own almost certain death. This then allows him to recover his life, deeply humbled but highly honored at the same time once he has returned from the forest.

Long before him, Guigemar in Marie de France’s eponymous lai (ca. 1190) does not know anything of love until he kills a doe in the forest and is badly wounded himself by the rebounding arrow, whereupon the doe tells him magically that he can only be healed by a lady who would bring him love. The forest thus proves to be the decisive catalyst for him, as for many other lovers who struggle hard to understand and cope with the challenges of life.

To bolster the broad claim of the forest as being a space with great epistemological significance in the Middle Ages, I have investigated some of the most important and also less known texts in medieval German literature. Wolfram von Eschenbach, in his Parzival (ca. 1205), presents the forest Soltane as a deceptively safe refuge for Herzeloyde and her son, the eponymous protagonist. The latter soon enough encounters Arthurian knights and immediately wants to imitate them, so he leaves the forest and begins his own life, which quickly puts him on his quest for the Grail, which, intriguingly, is also situated deep in the forest far beyond all other human habitation. Young Parzival has to leave the forest in order to grow up and to return to it as a mature man in order to reach the goal of his life and to save the world of the Grail.

Gottfried von Strassburg situates, at the end of his famous love romance, Tristan und Isolde (ca. 1210), the two lovers in a love cave after they have been expelled from court. There, in the midst of the large forest which is almost impenetrable for people, they experience a kind of utopia, but ultimately they have to return to society and thus must face the tragedy of their love which they cannot maintain. In the anonymous Nibelungenlied (ca. 1200) the protagonist Siegfried is slain in the forest after he has humiliated the entire Burgundian court once again through his extraordinary, unparalleled, and exorbitant hunting exploits in the forest. But later poets, such as The Pleier in his romance Melerantz von Frankreich (13th century), approached the forest as a positive space where the future lovers can meet for the first time and engage in intimate conversation. Konrad von Würzburg identified the forest in his enigmatic Partonopier und Meliur (end of the 13th century) as the world in-between East and West, yet Partonopier almost would have failed in achieving his goal to win the hand of Meliur if he would not have been rescued out of the forest and then helped to regain his mental health by Meliur’s sister.

As I trace in my book, as soon as we realize the enormous epistemological significance of the forest in the lives of many medieval protagonists, we can recognize how much an ecocritical reading can help us to uncover previously unnoticed levels of meaning in those texts. Not only did medieval poets have a much closer perception and appreciation of the forest as a natural space, they also integrated the forest much more sensitively for the character and plot development than we might have assumed before. This has, of course, tremendous implications for all literary investigations, especially today, since we can thus recognize how much the forest truly matters, both materially/physically and symbolically, to all human existence, both in the Middle Ages and today. The deep concerns of modern scientists about the preservation of the forest thus finds a significant parallel in medieval literary texts where the forest is identified as a central staging ground with enormous transformative powers.