Japanese historian upends the familiar narrative of WW 2 by taking a bottom up approach, focusing on fascism from the grassroots

As a young historian researching prewar popular political movements in the early 1970s, Yoshimi Yoshiaki (b. 1946) became increasingly struck—and troubled—by the systematic inattention to popular experiences of the war period, along with the virtually universal silence on questions of popular war responsibility. Imbued with the progressive convictions of a scholarly generation that came of age amid the political struggles of the late 1960s, he was dissatisfied with the near-universal academic focus on elites and abstract social structures that rendered the story of the Japanese experience of the war “a history without people.” After many years of research, stops and starts, the end result was Grassroots Fascism: a radically different vantage on the wartime experience from the “bottom-up” and a bold attempt to break out of the constricted confines of “history in the passive voice.”

Taking us on a narrative journey that begins with the war’s troubled early 1930s beginnings and culminates in the disaster of defeat and the promise of a new beginning in 1945, moving adeptly and systematically between the home front and the diverse variety of “fronts” that distinguished Japan’s far-flung Asian imperium, Grassroots Fascism exposes us to a remarkable array of popular voices deftly assembled from sources such as diaries, government archives, and memoirs. Along the way Yoshimi presents a carefully nuanced and historicized portrait of everyday, non-elite Japanese in all their real-life complexity and ambiguity not only as victims of, but also as active participants in, the wartime struggle for hegemony in Asia and social renovation at home. Grassroots Fascism is also at special pains to include penetrating accounts of the experience of Japanese ethnic minorities and imperial subjects, including Okinawans, Koreans, and Taiwanese, engaged in their own complex personal and group negotiations of the wartime enterprise.

In taking Japan’s “common people” as protagonists and letting them in effect tell their own story of the war as it evolved, Grassroots Fascism reveals a 1930s and 1940s Japan that defies historiographical convention. Viewed from the bottom up, there unfolds before us a complex modern mass society, with a corresponding variety of popular roles and agendas. The comfortable, transparent “black and white” of conventional narratives of victims and villains is boldly exchanged for the translucent “grey” of a Japanese people cast as both victim and victimizer. In this and in its ingenious deployment of source material to evoke the wartime experience in three dimensions of vividness and diversity, Yoshimi’s study elevates scholarly discussion of the nature and dynamics of Japan’s wartime experience—and of “Japanese fascism”—to a bold new level. 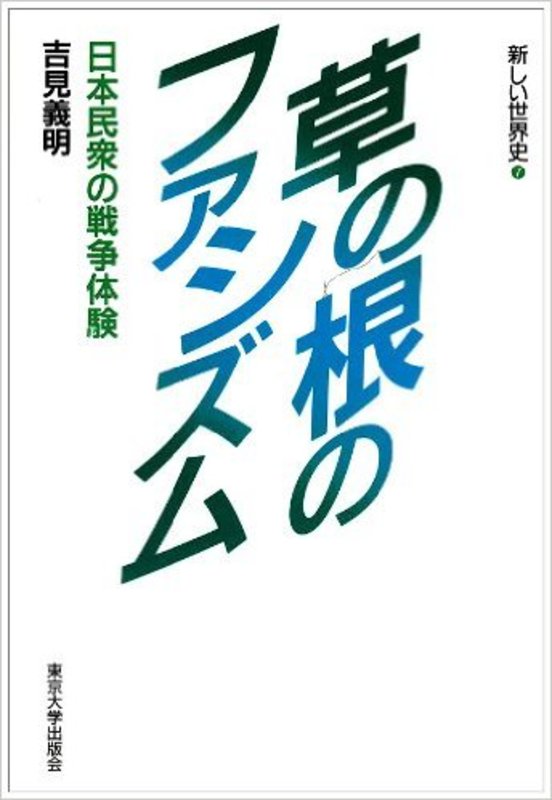 Yoshimi’s narrative of the unfolding of Japanese fascism is distinguished by his identification of the crucial role played by the interaction between the metropolitan center and the imperial periphery and the link between the increasingly brutal Japanese suppression of anticolonial resistance and fascist radicalization. This innovative perspective in turn emphasizes the historicity of the Japanese wartime regime as one evolving—and intensifying—in response to the perceived demands of total war.

At the start of the Sino-Japanese war in the late 1930s,“Domestically there was not much of a crisis situation, but quite important in place of this was the great number of the people who were mobilized into the military and sent to the Chinese mainland, there having a crisis type of experience that played an extraordinarily great role in Japan’s fascistization—this is my thinking.”1 Yoshimi’s centering of this China war dynamic in the making of Japanese fascism leads him to locate the critical moment of fascist consolidation at a time in which the savagery of the war and the tenacity of Chinese resistance prompted an increasingly radical Japanese response. He dates this moment to 1940–1941—precisely the period in which conventional, domestically-focused scholars have identified a “failure” of attempts to consolidate a genuinely fascist regime in the political center “back home.”2 In turn, Japan’s unexpectedly easy and dramatic string of victories against the Western Powers in Asia and the Pacific during the first months of the Pacific War that followed soon afterward imparted a deeper solidity and legitimacy to Japan’s war, to the system supporting it, and to the sacrifices it demanded, its “success” virtually silencing all remaining domestic dissent. “Here, a true situation of wild enthusiasm had finally emerged,” writes Yoshimi, “and emperor-system fascism had crystallized.”3 In this sense this experience can be fruitfully compared with similar developments in Europe in the wake of Mussolini’s 1935 victory in Ethiopia and Hitler’s unexpectedly easy defeat of archrival France in 1940, but for two reasons its impact was all the more broad and profound: militarily, it could not have posed a more positive contrast to the inconclusive and ongoing quagmire of Japan’s war in China. Equally or more important was its matching of Japanese propaganda of “Asian liberation” with concrete and effective action. As Yoshimi observes in Grassroots Fascism, such a mission held an appeal not only for Japanese but indeed for peoples around the globe convinced of the illegitimacy of Western imperial domination, including Taiwanese, Koreans, and Southeast Asians.

What ultimately sets Yoshimi’s approach apart is his combination of an empirewide perspective with a focus on the rise of fascism from the “bottom up”: the ambivalent role of ordinary Japanese not only as victims but also as agents and conduits of fascism. In a dialectical movement between metropole and periphery, between battlefield and paddy field, and between visions of imperial prosperity and the grim reality of wartime deprivation, ordinary Japanese came to share with military and bureaucratic elites a desire for a transcendent resolution of the national crisis, producing indispensible mass support for a radical transformation of the relations of state and society along fascist lines. In the Japanese countryside, Yoshimi says, at first it was “landlords and powerful landed farmers who were the core figures at the center of the system,”reflecting a situation of social and political continuity since the Meiji period. But as the war escalated into total war, he argues, “many people were needed as supporters, and the central supporters [of fascism] become those of a slightly lower level—landed farmers and landed/tenant farmers.”4 For many, participation in the war effort was not simply the product of patriotism or pressure from above, but it also beckoned as a revolutionary opportunity for social and political participation and advancement in a time of crisis. From peasant recruits to small farmers to elementary school teachers to colonial settlers, we are thus confronted with grassroots fascism as an ambiguous, ambivalent product of oppression and ambition, hope and desperation, brutalization and brutality.