M. Andrew Holowchak is the author of many books about Thomas Jefferson including "Framing a Legend: Exposing the Distorted History of Thomas Jefferson and Sally Hemings" (2013). Amy J. Barbee is a clinical psychologist, private practice. 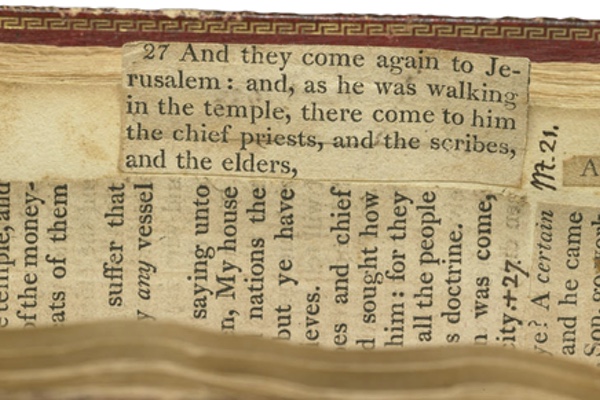 Thomas Jefferson began to take a genuine interest in Jesus and his teachings years prior to the assumption of his presidency in 1801. Before that and because of his immersion in Bolingbrokean biblical criticism, in what might be called his literary-criticism phase, his interest in the Bible was analytical. The Bible—because of its “amphibologisms,” “misconceptions,” and “Nonsense” (TJ to John Adams, 12 Oct. 1813)—was deemed to be a book uniquely suited only to sharpen one’s critical skills. Yet sometime in the 1780s, because of interaction with personages such as Richard Price and Joseph Priestley, Jefferson has a volte-face. The Bible becomes an absorbing, engaging book, if only because of a newly acquired keen interest in the teachings and life of Jesus. Jesus comes to be recognized as the greatest moralist and greatest moral reformist. 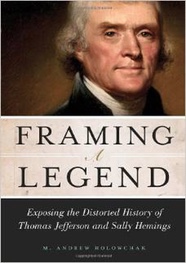 Besides the absurdities and untruths in the Bible, Jefferson in time came to recognize its numerous gems. When reading the Bible, he tells William Short (13 Apr. 1820), “I find many passages of fine imagination, correct morality, and of the most lovely benevolence; and others, again, of so much ignorance, so much absurdity, so much untruth, charlatanism and imposture, as to pronounce it impossible that such contradictions should have proceeded from the same Being.”

Fascination with Jesus results in three significant projects. First, Jefferson constructs a “Syllabus” (1803) that compares and evaluates the Jewish morality of the Old Testament, the teachings of the ancient Greek and Roman ethicians, and the moral teachings of Jesus, who “corrected the Deism of the Jews,” left behind moral doctrines that were “more pure & perfect than those of the most correct of the philosophers,” “pushed his scrutinies into the heart of man,” and “wielded it [belief in a future state] with efficacy, as an important incentive … to moral conduct.” That syllabus, he hoped, would be fleshed out by someone of greater abilities and with more time for research (Priestley or Van der Kemp).

Jefferson then constructs his own bible, The Philosophy of Jesus (1804), by “cutting verse by verse out of the printed book, and arranging the matter which is evidently his and which is as easily distinguished as diamonds in a dung-hill” (TJ to John Adams, 12 Oct. 1813)—a metaphor he iterates in several letters on the topic.

Yet that work is deemed precipitously fashioned (TJ to Francis Adrian Van der Kemp, 25 Apr. 1816), and so he returns to it in 1819, when he begins another, broader version of the Bible, The Life and Morals of Jesus (1820), to be arranged chronologically, not thematically, given interest in reconstruction of the life of Jesus as well as his philosophy. Both Jeffersonian bibles were part of a fleshing out of Jefferson’s “Syllabus,” whose intent was much broader. Jefferson’s complete project, select letters show (e.g., TJ to Charles Thomson, 9 Jan. 1816, and TJ to William Short, 31 Oct. 1819), was supposed to include a translation of Gassendi’s Syntagmata, which Jefferson mistakenly thought was a reliable depiction of Epicurean ethics, and a translation, which Jefferson himself thought of doing, of Epictetus (clearly, his Handbook).

Why the volte-face? Why had Jefferson become so unreservedly fascinated with the life and teachings of Jesus?

The reason often cited by historians is Jefferson’s own—viz., that Jesus was the world’s greatest moralist because he rejected the “morality” of his Jewish culture and because he, preaching love of deity and love of humanity without an eye on personal gain, transcended the egoism of the ancient Greeks and Romans (equanimity through virtuous actions was clearly a personal gain). Jefferson tells Samuel Greenhow (31 Jan. 1814), “There never was a more pure & sublime system of morality delivered to man than is to be found in the four evangelists.” Another reason, not often cited by historians, but equally part of the etiological picture, is that the teachings of Jesus, deterged of their “feculence,” would be the closest thing to the perfect moral system for smooth-running republican government. He writes to Joseph Priestley (21 Mar. 1801), “The Christian religion, when divested of the rags in which they have enveloped it, and brought to the original purity and simplicity of its benevolent institutor, is a religion of all others most friendly to liberty, science, and the freest expansion of the human mind.”

There is, I suspect however, a third reason, psychological but no less significant. By the time of his presidency, Jefferson strongly identified with Jesus. Why?

First, each was a stern moralist, espousing equalitarianism—as radical in the early 1800s as it was in Jesus’s day.

Jesus developed his own moral views, which, rejecting claims such as the Jews were the chosen people of God, steered clear of the idolatrous and filiopietistic views expressed in the Old Testament. Those views also surpassed the ancient ethicians by factoring in benevolence—kindness for the sake of kindness and not for personal gain. In speaking to the heart, not to the head, Jesus preached a morality that allowed, in the words of Priestley, “all [to be] baptized into one body, whether we be Jews or Gentiles, whether we be bond or free” (Socrates and Jesus, 1803). All people were God’s children; none were privileged by wealth or birth. Sin or its lack distinguished one person from another.

Jefferson’s moral views were an admixture of ancient virtue ethics (Stoicism especially), the moral-sense theories of his day (Kames and to a lesser extent Hutcheson), and the deterged teachings of Jesus (the New Testament cleansed of its supernaturalism and obscurities). He rejected the ancient ethicians because they spoke to the head, not the heart—viz., they made morality a matter of intellect, given to too few, and not sensation, given to all—and because they failed to factor in benevolence. Adoption of a morality in which all humans were equals required adoption of an equalitarian political philosophy—i.e., government based on equal and inalienable rights for all citizens, governing by the “natural aristoi”(those of genius and virtue, not of wealth and birth), and government for the wellbeing of the citizenry, not for those governing.

Second, each was persecuted for unconventionality—viz., for essaying to introduce new, uncomfortable “truths” to the world.

Jesus’ religious unconventionality comprised unconditioned love of God and of other humans, and belief in an afterlife. By “simplifying” the religion of the Jews, he challenged Jewish religion, and became an enemy of Jewish culture. Reforming the religion of the Jews, Jewish dignitaries thought him to be a dangerous maverick—even a pariah. Moreover, he became an enemy of the Roman Empire. So long as Christianity was a minor movement, it was tolerated by the state. Yet, “when any converts were made to christianity [sic],” says Priestley (Socrates and Jesus), the republic turned to “persecution of christians, as seditious persons, men who turned the world upside down, their principles [equalitarian] tending to the ruin of all states.” Because Jesus’ teachings tended toward subversion of the established cultural and political order, Jefferson writes to Charles Clay (29 Jan. 1815), his contemporaries were forced to corrupt his teachings. Furthermore, “they felt Him as such [as one of the greatest moral reformers], and never rested until they had silenced Him by death.”

Jefferson advocated principles of republican governing, normative in nature—e.g., thin government, governing by those with genius and virtue, governors governing for the sake of the citizenry, governing in partnership with science, education for all in keeping with their needs, periodic constitutional reform consonant with the will of the citizenry, peaceable relations with all nations, and segregation of church and state—that were avant garde in his day. Because of his progressivism and religious unconventionalism, he was thought to be a scientist and an enemy of religion—i.e., an above-board threat to conventional morality and political stability. His Bill for Religious Freedom, which passed in 1786, was proof of his atheism, as was his published sentiment in Notes on Virginia that “it neither picks my pocket nor breaks my leg” to say “there are twenty gods, or no god.” His patronage of science—“science is more important in a Republic than in any other government” (correspondent unknown, 28 Sept. 1821)—made him unfit for politics. Thus, he suffered prodigious persecution by Federalists as well as religious prelates—especially prior to his election to the presidency in 1801 and in 1805. Citizens were warned to hide their Bibles, as Jefferson, once president, was sure to burn them. They were also warned to expect political chaos, because a “bibliobibulous” philosopher was about to take office.

Jefferson’s letters also offer evidence of his identification with Jesus. To Edward Dowse (19 Apr. 1803), he begins with a lengthy paragraph in which he discusses the superiority of Jesus’ teachings when compared to the ancient philosophers. The ancients were concerned with action, not intention, and with the rational governance of passions, and thus, with equanimity, and not with humans’ duties to others. In contrast, “Jesus embraced with charity and philanthropy our neighbors, our countrymen, and the whole family of mankind. … He pressed his sentiments into the region of our thoughts, and called for purity at the fountain head.”

In the subsequent paragraph, Jefferson writes of his own persecution vis-à-vis the Federalist presses: “Every word which goes from me, whether verbally or in writing, becomes the subject of so much malignant distortion, and perverted construction, that I am obliged to caution my friends against admitting the possibility of my letters getting into the public papers, or a copy of them to be taken under any degree of confidence.” He adds, however, that his own persecution is no warrant to “bow to the shrine of intolerance, or admit a right of inquiry into the religious opinions of others.” There is, it seems, a natural transition, from Jesus to Jefferson, which suggests a pairing of the two concepts.

Why is that relevant?

Associationist psychology—whose roots are in Locke and Hume—posits that ideas in the human mind are not innate, but instead the result of experience. Particular experiences cause distinct ideas over time to get paired and are thereafter inseparably, or relatively so, linked. (It is associationism that led Freud to posit that by freely associating ideas in a clinical setting, a therapist could eventually get to underlying pathological problems—e.g., linkage of fear of purple with an early childhood seduction by a person wearing purple.) The letter to Dowse and other letters offer evidence not only of esteem for, but also identification with, Jesus. (See: TJ to Benjamin Rush, 23 Sept. 1800; to Moses Robinson, 23 Mar. 1801; to Benjamin Rush, 21 Apr. 1803; to Levi Lincoln, 26 Apr. 1803; to William Baldwin, 19 Jan. 1810; to Charles Clay, 29 Jan. 1815; to Charles Thomson, 9 Jan. 1816; to F.A. Van der Kemp, 25 Apr. 1816; to Margaret Bayard Smith, 6 Aug. 1816; to Timothy Pickering, 27 Feb. 1821; and to George Thacher, 26 Jan. 1824.)