Militarism Run Amok: Russians and Americans Get Their Kids Ready for War 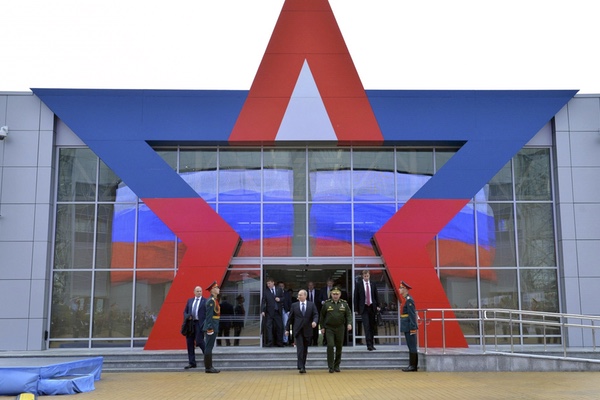 In 1915, a mother’s protest against funneling children into war became the theme of a new American song, “I Didn’t Raise My Boy to Be a Soldier.” Although the ballad attained great popularity, not everyone liked it. Theodore Roosevelt, a leading militarist of the era, retorted that the proper place for women who criticized war was “in a harem―and not in the United States.”

Roosevelt would be happy to learn that, a century later, preparing children for war continues unabated.

That’s certainly the case in today’s Russia, where thousands of government-funded clubs are producing what is called “military-patriotic education” for children. Accepting both boys and girls, these clubs teach them military exercises, some of which employ heavy military equipment. In a small town outside St. Petersburg, for example, children ranging from five to 17 years of age spend evenings learning how to fight and use military weapons.

These efforts are supplemented by the Voluntary Society of Cooperation with the Army, Air Force, and Navy, which prepares Russian high school students for military service. This society claims that, in the past year alone, it has held 6,500 military patriotic events and channeled more than 200,000 young people into taking the official “Ready for Labor and Defense” test. Government funding of the society’s budget is lavish, and has grown dramatically in recent years.

Apparently sharing that opinion, the Russian government opened a vast military theme park in June 2015 in Kubinka, an hour’s drive from Moscow. Frequently referred to as a “military Disneyland,” Patriot Park was proclaimed “an important element in our system of military-patriotic work with young people” by President Vladimir Putin. On hand for the opening and backed up by a military choir, Putin also brought the good news that 40 new intercontinental missiles had been added to Russia’s nuclear arsenal. According to news reports, Patriot Park, when completed, will cost $365 million and draw up to 100,000 visitors per day.

Those attending the park’s opening found the rows of tanks, armored personnel carriers, and missile launching systems on display, plus the riding of tanks and shooting of guns, deeply moving. “This park is a gift to Russian citizens, who can now behold the full power of the Russian armed forces,” declared Sergei Privalov, a Russian Orthodox priest. “Children should come here, play with the weaponry and climb on the tanks and see all the most modern technology.” Alexander Zaldostanov, the leader of the Night Wolves, a violent biker gang planning a similar park, remarked: “Now we all feel closer to the army” and that is “a good thing.” After all, “if we don’t educate our own children then America will do it for us.” Vladimir Kryuchkov, a weapons demonstrator, admitted that some missile launchers were too heavy for very small children. But he maintained that smaller rocket-propelled grenade launchers would be perfect for them, adding: “All males of all ages are defenders of the motherland and they must be ready for war.”

They are certainly ready in the United States. In 1916, Congress established the Junior Reserve Officer Training Corps (JROTC), which today flourishes in some 3,500 American high schools and enrolls well over half a million American children. Some government-run military training programs even operate in U.S. middle schools. In JROTC, students are taught by military officers, read Pentagon-approved textbooks, wear military uniforms, and conduct military parades. Some JROTC units even use automatic rifles with live ammunition. Although the Pentagon covers some of the expense of this costly program, the rest of it is borne by the schools themselves. This “youth development program,” as the Pentagon calls it, pays off for the military when JROTC students come of age and join the armed forces―action facilitated by the fact that U.S. military recruiters are often right in the classrooms.

Even if high school students do not participate in JROTC activities, military recruiters have easy access to them. One of the provisions of the No Child Left Behind Act of 2001 requires high schools to share students’ names and contact information with military recruiters unless students or their parents opt out of this arrangement. In addition, the U.S. military uses mobile exhibits―replete with gaming stations, huge flat-screen television sets, and weapons simulators―to reach children at high schools and elsewhere. GI Johnny, an inflatable, goofily-grinning doll dressed in Army fatigues, has been a great hit among young children. According to one military recruiter, “the little kids are very comfortable with Johnny.”

In 2008, the U.S. military, recognizing that video arcades with first person shooter games were far more popular than its dreary recruiting centers in urban ghettoes, established the Army Experience Center, a giant video arcade in the Franklin Mills mall just outside Philadelphia. Here children immersed themselves in hi-tech warfare at computer terminals and in two large simulation halls, where they could ride Humvee vehicles and Apache helicopters and shoot their way through waves of “enemies.” Meanwhile, Army recruiters circulated through the youthful throngs, signing them up for the armed forces.

Actually, video games might do a better job of militarizing children than do the recruiters. Created at times in cooperation with major arms contractors, violent video games played by children dehumanize opponents and provide justifications for “wasting” them. They not only promote a level of ruthless aggression that the Wehrmacht might well envy―see, for example, the immensely popular Tom Clancy’s Ghost Recon Advanced Warfighter―but are very effective in warping children’s values.

How long will we continue raising our children to be soldiers?