A salute lost to history 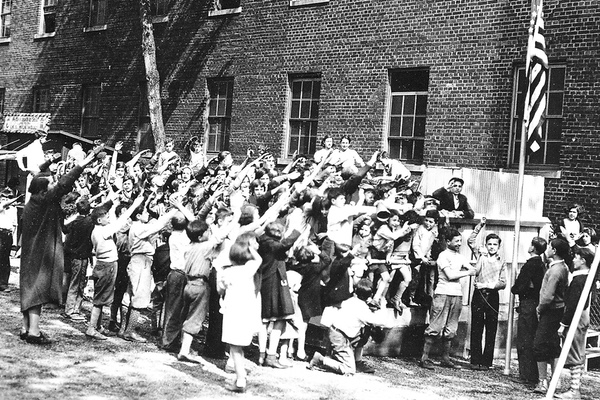 The photo is odd. Why would Jewish American schoolchildren be imitating the Nazi salute?

The Post-Gazette received this photo from a confused reader, who said it just goes to show that we shouldn’t jump to conclusions about what future Queen Elizabeth II was doing in a photo recently released by The Sun tabloid.

That photo, a still frame from a 1933 film The Sun evidently managed to acquire from the secret Royal Archives, shows her uncle, the future King Edward VIII, with the smiling 6- or 7-year-old and her younger sister, Margaret, as they perform the Nazi salute. Edward, the princesses and the girls’ mother are walking on the lawn of Balmoral Castle.

Edward was an accused Nazi sympathizer who was warmly welcomed by Hitler when he visited Germany, and the question in that photo is not whether Elizabeth was doing the Nazi salute so much as in what context she was doing it.

The Kaufmann Settlement photo is different.

“This was the way Americans saluted the flag at the time. ... In 1934, this would have been perfectly normal, strange though it looks to us now,” said Timothy Snyder, a Yale history professor who specializes in the Holocaust.

The stiff-arm salute in America preceded both the Nazi salute and Mussolini’s salute, from which the “Heil Hitler” salute came, said Richard Ellis, professor of politics at Willamette University in Salem, Ore., and author of “To the Flag: The Unlikely History of the Pledge of Allegiance.”

It emerged here in the late 1800s, began to disappear at the beginning of Word War II and was gone by its end.