Just Why Exactly Is Woodrow Wilson Rated so Highly by Historians? It's a Puzzlement. 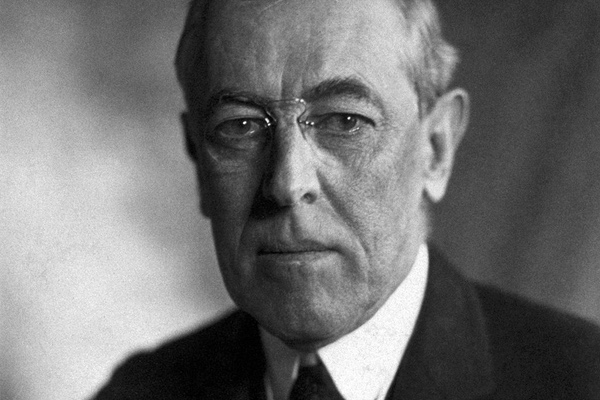 There has been a substantial amount of scholarly writing about the subjectivity in these rankings: pointing out, for example, that historians, like everyone else, are politically biased; that presidential reputations inevitably change as new evidence becomes available; that the ideological pendulum inevitably swings from liberal to conservative and vice versa; and that the perception of what constitutes successful presidential leadership has itself been dramatically altered since the Progressive era, and especially since the New Deal.

Nonetheless, despite an occasional dramatic swing—such as the higher ratings for President Eisenhower since the opening of his White House papers and personal diaries—the presidents ranked as “great” have remained remarkably consistent. Lincoln, FDR, and Washington ranked first, second and third overall from 1948 to 2015. Following close behind, as “Near Great,” were Jefferson, Theodore Roosevelt and Wilson. Wilson ranked fourth in the 1948/1962 surveys, but still averaged well enough from 1982 to 2015 to place him overall as #6—above Truman, Eisenhower, Jackson and Kennedy in the top 10.

Wilson’s consistently high regard among historians is striking because the American history written and taught today at the college level would have been inconceivable not only during Wilson’s era but even as recently as the first two historians’ rankings in 1948 and 1962. Not only has the profession itself been reshaped since the sixties by the participation of women and minorities, but the top/down, “elite” history of the first half of the 20th century has been obliterated. Wilson’s continuing high estimation by historians is particularly curious in the context of the intense academic focus, for nearly a half century, on race and gender issues.

In the 1950 edition of a popular textbook, first published in 1930, Pulitzer Prize-winning historian Samuel Eliot Morison declared that “As for Sambo, whose wrongs moved the abolitionists to wrath and tears, there is some reason to believe that he suffered less than any other class in the South from its ‘peculiar institution.’ ” This now repudiated perspective is chiefly associated with the influential work of Georgia-born, University of Michigan professor Ulrich B. Phillips in the early decades of the 20th century. But, Princeton University professor Woodrow Wilson (an 1886 Johns Hopkins Ph.D.) was actually an earlier practitioner of this racially deterministic view of history.

Wilson was born in Virginia and raised there and in Georgia and South Carolina by a family that was deeply committed to slavery and the Confederacy. His passionate identification with the Southern cause constituted an integral part of his personal and intellectual identity. In his multivolume history of the United States published in 1900, he argued that Reconstruction was an externally and artificially imposed break in the natural state of black servility. The slave population, he insisted, had always imposed an enormous responsibility on their white masters: “the care of the slaves, their maintenance like a huge family of shiftless children, remained a duty and a burden which the master could not escape.” Even the chaos of the Civil War, Wilson enthused, could not rouse the slaves to seek freedom: “how quiet, how unexcited, how faithful and steady at their accustomed tasks, how devoted in the service of their masters the great mass of the negro people had remained amidst the very storm and upheaval of war.” The many thousands of slaves who fled to Union army camps, “a dusky host of pitiful refugees … and helpless creatures,” Wilson explained, had done so merely because of panic when their plantations were destroyed. These former slaves, he laments, “were easily taught” by the carpetbaggers and scalawags, “to hate the men who had once held them in bondage.” As a result of aroused white Southern manhood and the KKK, however, “The Negroes were generally easy enough to deal with, a thorough fright usually disposed them to make utter submission … [and] do anything their ghostly visitors demanded.”

Wilson’s egregiously biased and largely fabricated “history” stands as a crude but entirely mainstream summary of the view of Reconstruction which dominated the American historical profession, as well as much of U.S. politics, education and society for decades. Therefore, it would be presentistic to judge his presidency in light of this early racial bias except for an inescapable fact—he continued to hold these views as president and took specific actions to put them into practice during his administration.

During the 1912 campaign Wilson promised black Americans “absolute fair dealing” and “not more grudging justice but justice executed with liberality and cordial good feeling,” and won the public endorsement of NAACP director of publications and research and Harvard Ph.D., W.E.B. DuBois. When Wilson was inaugurated in March 1913, Washington had long been a segregated city, with the important exception of the agencies of the federal government. Once in office, however, Wilson quickly approved efforts by several Southerners in his cabinet to segregate their departments; a new rule was also implemented requiring photographs to be submitted with all federal job applications. Wilson fired all but two of the 17 black supervisors who had been appointed to federal positions during the Taft administration. Lunchrooms and restrooms were segregated and in some office spaces screens were placed between black and white employees. He also discontinued the practice of appointing black ambassadors to Haiti and Santo Domingo. His amused cabinet members even told journalists that the president enjoyed telling “darky stories” during their meetings.

A delegation of black journalists, led by William M. Trotter of Boston, met with the president at the White House in 1914 to protest the segregation of federal agencies. Trotter brought up Wilson’s pre-election promises and insisted that the administration’s extension of segregation was humiliating and degrading to black citizens. Wilson countered that segregation was a proven benefit to both races. A shouting match ensued and the president ordered Trotter to leave the White House, declaring angrily, that he had never been spoken to that way in his life by a Negro and would not tolerate it. Newspaper headlines proclaimed that “President Wilson rebukes Negroes for impudence,” identifying Trotter as “particularly offensive.” Five years later when Trotter tried to go to Versailles to cover the peace conference for his newspaper, Wilson’s State Department denied him a passport.

In 1915, the White House previewed D.W. Griffith’s film, “Birth of a Nation” for the president, his cabinet and their families. Based on the 1905 book, The Clansman, written by Wilson’s friend and college classmate Thomas Dixon, the film popularized and reinforced the historical fantasies and distortions promoted in the president’s own writings and even used quotes from his work in the subtitles. After viewing the film Wilson was quoted as saying, “It is like writing history with lightning, and my only regret is that it is all so terribly true." Racial conflict broke out in several cities after the film was shown and it was subsequently banned in several other urban centers; the reenergized KKK meanwhile recruited hundreds of thousands of new members. Wilson, in short, actively identified with and promoted the dominant and unapologetic racism of his time. It is an essential and undeniable part of his presidential legacy; but, oddly enough, that fact does not seem to have had much impact on the judgment of academic historians at a time when racial issues are front and center in historical scholarship.

On the most important gender issue of his time, woman’s suffrage, Wilson’s record is likewise hardly outstanding. Unlike many other progressives, Wilson took an essentially Southern/state’s rights position; suffrage, he insisted, was a matter for the states to decide and was not within the purview of the federal government. During the 1912 campaign, despite the historic endorsement of the Susan B. Anthony woman’s suffrage amendment by Theodore Roosevelt’s Progressive party, Wilson refused to pin himself down, claiming that the amendment had not been endorsed in the platform of the Democratic party that had nominated him for president. Once in the White House, Wilson spoke with delegations of women urging him to endorse the national, constitutional route to woman’s suffrage. He was charming but elusive, frequently giving unsolicited and patronizing lectures and barely concealing his discomfort in the presence of politically active women. Years before in a rare flash of self-awareness, he had acknowledged, but apparently never put behind him, the “chilled, scandalized feeling that always overcomes me when I see and hear women speak in public.”

By 1916, as Wilson faced a tough campaign for reelection, more militant suffrage organizations such as Alice Paul’s National Woman’s Party refused to endorse him. The president then met with Anna Howard Shaw of the National American Woman Suffrage Association and apparently pledged his support for the amendment. Shaw afterwards declared that she took Wilson at his word and that his promise had been firm and unambiguous.

But, by the time of his March 1917 second inauguration, the president had begun to waffle on his election year promise. Wilson eventually refused to meet with more suffrage delegations and the National Woman’s Party began to picket outside the White House gates—an act that infuriated the president and much of American public opinion. Demonstrators, including Alice Paul, were arrested, denied counsel, held in solitary confinement, and even force-fed. Eventually the situation turned into a public relations catastrophe for the administration and the charges were all thrown out. Early in 1918 President Wilson finally endorsed the Susan B. Anthony Amendment. Wilson’s resistance to woman’s suffrage was hardly his finest hour. Although his views were not extreme in his own time, he nonetheless lagged well behind an emerging national consensus and repeatedly reneged on pledges taken in good faith. Therefore, his consistently favorable ranking by historians remains quite remarkable in an era in which gender equality issues have taken on such paramount importance.

To some degree, Wilson’s standing with historians is explained by the significant progressive legislation enacted during his first term. However, the fact that he slipped only slightly from #4 in 1948/1962 to average #6 over the next fifty+ years, is more likely rooted in his dramatic and determined, but ultimately tragic and failed effort to secure American participation in the League of Nations. Wilson was known to have scant regard for the learning and intellect of most members of Congress; but, in Henry Cabot Lodge, he had met his equal. Wilson’s quasi-religious intransigence helped make it possible for Lodge’s shrewd and calculated obstructionism to prevail in the bitter struggle over Senate ratification. Their mutual, deeply personal hatred was surely magnified by the fact that they were both published historians and Ph.D.’s—creating an incendiary mixture of egotism, professional enmity, and intellectual conceit that was almost certain to ignite.

Wilson had initially been received in Europe with wild public enthusiasm; but, as British Versailles peace conference participant John Maynard Keynes observed in 1919, President Wilson “had thought out nothing; when it came to practice his ideas were nebulous and incomplete. He had no plan, no scheme, no constructive ideas whatever for clothing with the flesh of life the commandments which he had thundered from the White House.”

In his last public statement, in late 1923, Wilson revealed that his missionary zeal and certitude remained undiminshed four years after a series of disabling strokes left him a broken man: “I am not one of those that have the least anxiety about the triumph of the principles I have stood for,” he told supporters assembled outside his Washington, D.C. house. “I have seen fools resist Providence before, and I have seen their destruction, as will come upon these again, utter destruction and contempt. That we shall prevail is as sure as that God reigns.”

Taken all in all, Woodrow Wilson’s consistently high rating by historians “is a puzzlement.”*

*Rogers and Hammerstein, “The King and I."