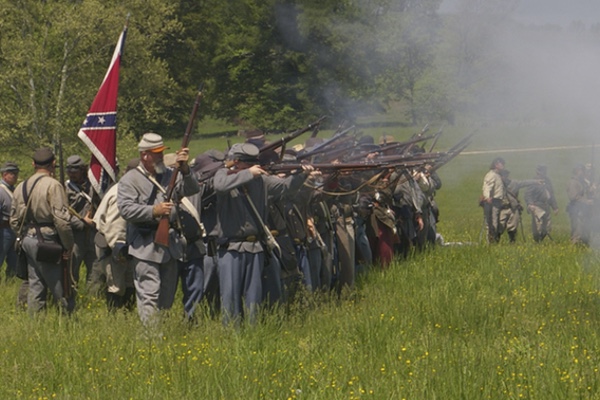 After 150 years of various degrees of veneration, we now stand united in our conviction to finally strike the confederate colors. “It is altogether fitting and proper that we should do this.” For the people of 2015, the confederate flag represents hate and oppression and serves as an offensive reminder of America’s most egregious of original sins.

However, if we bury this flag with a grotesquely distorted indictment brought forward in a moment of extreme collective anguish, rather than a narrative that embraces a fuller historical truth, we do ourselves and our posterity serious damage.

History represents the preservation of our collective past as well as the study of change over time. While our natural instinct is to understand the past in the context of the present, this tendency is a form of narrow-mindedness sometimes called “presentism.” It is an understandable prejudice, but it is not the most excellent way. The role of the historian encompasses a sacred duty to offer a multi-dimensional picture of the past (and the people of the past) in the context of the past. In our recent moment of national grief and outrage, unfortunately, too many historians opted for caution over courage, choosing to remain silent in the midst of a conversation of great import.

It will surprise no thinking person to hear that the modern “confederate flag” has an extremely complicated provenance that subsumes multiple meanings and numerous points of significance in our history. In the beginning, the saltine design of the confederate flag (the “Cross of Saint Andrew”), for the people of 1861, echoed Christian martyrdom and the tradition of heraldry.

This confederate flag was never, in fact, the political banner of the so-called Confederate States of America. The national flag of the confederacy consisted of the “stars and bars” (a nickname often erroneously misapplied to the modern confederate battle flag). The actual stars and bars was admittedly a variant of “Old Glory,” featuring a blue field of stars and three broad red and white stripes.

What most of us refer to today as the confederate flag was actually the battle flag of the Army of Northern Virginia, the celebrated main army of the rebellion located in the Eastern Theatre and, significantly, under the command of Robert E. Lee. In the aftermath of the Civil War, Lee emerged as a heroic symbol for the defeated South, embraced by millions of Americans North and South as the epitome of a non-political good soldier reluctantly called to war and an embodiment of integrity, civility, and contrition.

Not surprisingly, Lee’s flag also emerged as the least offensive vehicle with which to celebrate and commemorate the valor of the confederate veterans of the late war. Early in the first generation following the terrible conflict, the battle flag often decorated the graves and public memorials to the soldiers of the rebellion.

Embattled Courage: What to Do With the Confederate Soldier?

No matter, weren’t the soldiers of the rebellious confederacy fighting for the continuation of slavery? The simplest answer is YES, of course. However, the shibboleth that the United States fought the Civil War over slavery (while true on its face) is fast becoming almost as perversely misleading as the old saw that the war was primarily about the rights of states or the cataclysmic culmination to an epic economic conflict.

In truth, a more nuanced but still incomplete brief answer is that Southern political and socioeconomic elites, in a moment of frenzied hubris and paranoia (which one historian famously labeled a “crisis of fear”), imprudently led the South into an ill-fated secession purportedly to protect slavery.

On the other hand, of equal relevance, virtually no reputable historian contends that the North waged war against the South to end slavery. In fact, no reputable historian contends that slavery in the South was even truly at risk prior to secession. At no point did the North—or even Abraham Lincoln and his Republican Party formed in 1854 to resist the spread of slavery—show any inclination that they might abolish slavery where it existed in 1861. Quite the contrary. For every Alexander Stephens quote and state ordinance of secession proclaiming slavery as the primary cause for disunion, there are myriad definitive statements from Lincoln and numerous other key players (as well as a proposed constitutional amendment and a joint congressional resolution) guaranteeing slavery in the South in perpetuity or proclaiming to the citizens of the North that slavery played no role whatsoever in the Federal rationale for war.

In the end, the Civil War produced the termination of American slavery by constitutional amendment in December 1865. However, the idea of emancipation represented a radical notion that evolved gradually over the course of the war—motivated at least in part by a growing desire to punish the traitorous rebels. As many historians have noted, slavery seemed politically and culturally fortified in 1860; therefore, from that perspective, it was absolutely shocking that the peculiar institution lay lifeless by self-inflicted wound just five years later.

More directly related to the question of the confederate fighting man, consider also the fact that the vast majority of soldiers who fought for the rebellious confederacy were not slaveholders. Why then would Southern men fight for a confederacy dedicated to securing slavery? Simplest Answer: for home and kin and survival and the fellow alongside him in the trench as well as, paradoxically, the seemingly very “American” prerogative to conduct your own affairs independently—even when in the wrong.

An Aside: some of the same Americans today who are most vocal in their lack of sympathy for the confederate soldier are also sincerely convinced that the wars in Iraq and Afghanistan were ill-conceived, waged for malevolent purposes, and visited inhuman cruelty on millions of innocents. What shall we do with the flag that flies over the graves of those fighting men killed in the service of those questionable causes?

Dismissing the soldiers of the confederate rebellion as mere traitors somehow uniquely or disproportionately guilty of the widespread American vices of slavery, racism, and white supremacy makes for a crudely misleading fable—and egregious history.

Ironically, after the Civil War, the battle flag served as a vehicle for compromise and reconciliation. As the dust settled on the failed attempt to refashion the South according to an overly ambitious plan, the flag served as a banner under which the North implicitly invited the South to reconstruct a new sectional identity—distinct from the North but, nevertheless, fully American and absolutely loyal to the Union. While the political flag of the confederacy struck contemporaries as inappropriate (even seditious)—a commitment to reunion and reconciliation in the mold of Robert E. Lee, under the banner of his battle flag, fit neatly with the spirit of the times.

Simultaneously, an ominous and wickedly banal cultural shift transpired. In the interest of re-cementing the ancient bond between North and South, the lofty goals of recasting the racial system in the South fell victim to bigger national imperatives. As the decades rolled by, the North seemed to sense an inescapable dichotomy between restoring the white South and championing the recently emancipated African Americans. Reluctantly, gradually, tacitly, tragically, perhaps inevitably, the North favored the white South—reneging on the promises of Reconstruction and the recently re-mastered national rhetoric of equality. Dixie would survive. The rebel flag would represent a new (white) American South restored and on the rise. White supremacy would once again reign. And African Americans would have to wait for another day.

For almost a century, the battle flag was a ubiquitous and often benign symbol of Southern culture. The colors of the Army of Northern Virginia represented down-home cooking, hospitality, a slow drawl, sear-sucker suits, lazy summer days around a courthouse square, and other fanciful elements of prosaic Southern distinctiveness. For a period that even extended into the late-twentieth century, the popular image of some “good old boys” racing through the countryside in a classic American muscle car decorated with the confederate flag lovingly named the “General Lee” caused no angst for a vast majority of citizens. But we were fast approaching a long deferred reckoning with history.

In the decades after World War II, as the world changed, and America changed, and the national political culture changed, and the civil rights movement ripened, the flag came to represent something entirely different: defiance in the face of a newly ascendant national government and, much more damning, massive resistance to racial progress.

So, while the flag served as a mostly innocuous emblem of Dixie for generations of white Americans, those who raised the venerable standard in their fight to resist racial equality and first-class citizenship for African Americans fundamentally altered the trajectory of the symbol. The struggle to re-define the flag during the second half of the twentieth century offered up a critical debate: “hate versus heritage.” For many Americans of good will reared on the multiple meanings of the confederate flag, heritage easily prevailed.

But, for the generation come of age during the post-civil-rights era, the flag began to lose its allure. The outrages committed in association with the flag weighed it down. The particular character and bearing of those individual sons of the South who insisted on the perpetuation of the confederate flag (often in the back window of a pick-up truck) accelerated the disuse among mainstream Southerners, as pride gave way to increasing discomfiture—even as Southern distinctiveness slowly evaporated.

Most importantly, as it became clear that so many neighbors viewed the flag with palpable trepidation, injury, and disgust, the once beloved symbol suddenly seemed like a troubling relic that had outlasted its usefulness. As we crossed into the twenty-first century, seemingly a truly transformed America faced another choice (similar to the dichotomy from a hundred years earlier): would we continue to exalt the decaying traditions of the white South and the noble rebel cause? Or would we embrace a new day of racial transcendence with which the confederate traditions of the South were not compatible? Long before the tragic events of Charleston, the confederate colors were fading fast and on an inexorable path to retirement. The modern South was long primed to relinquish its battle flag.

Having said that, the intensely emotional national conversation of the past month has not served us well. Too many strident public intellectuals pushing hackneyed political agendas, intent on painting over the intricate mosaic of American history with a grotesquely wide brush, have noisily and maladroitly monopolized this moment. Sadly, American historians of note, rooted in the study of political history and anchored by rigorous methodology, perhaps the last of a perishing breed, have remained far too quiet. This receding generation of giants, whose clarion voices of authority can still thunder across the digital landscape, ought to weigh in.

For, even as all agree that the flag must yield the stage, the accompanying call to disinter and demolish the history of nineteenth-century America poses an existential threat to our integrity as a people. Much is at stake. We are in desperate need for our serious and revered scholars to take to the square and boldly push back against the incomplete and self-serving histories currently commanding the high ground in this momentous public debate.