Should the Government Be Able to Take Your House Away and Give It to a Private Developer?

Ilya Somin is a law professor at George Mason University, and an adjunct scholar at the Cato Institute. He is the author of the recently published book, The Grasping Hand: Kelo v. City of New London and the Limits of Eminent Domain (University of Chicago Press).

This June was the tenth anniversary of Kelo v. City of New London, one of the most controversial Supreme Court decisions in modern history. In a close 5-4 decision, the Court ruled that the city of New London, Connecticut could use eminent domain to condemn fifteen residential properties and transfer them to a new private owner, in order to promote “economic development.” Although the Fifth Amendment only allows the condemnation of property for “public use,” the majority opinion held that virtually any potential public benefit qualifies as a public use, even if the government cannot prove that the supposed benefit will ever actually materialize. 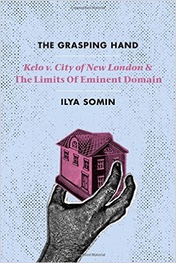 Kelo kicked off a political firestorm. Polls showed that over 80 percent of the public disapproved of the Court’s decision, which was denounced by such unlikely bedfellows as Rush Limbaugh, Ralph Nader, various libertarian groups, and the NAACP. As a result, some 45 states passed eminent domain reform laws – more state legislation than has ever been generated by any other Supreme Court decision.

The ruling also resulted in widespread concern over eminent domain abuse. That reaction was reinforced by the sad outcome of the Kelo takings: the ambitious development project failed, and today the condemned property remains empty, used mainly by feral cats.

For most Americans, the Kelo decision was probably the first time they focused their attention on eminent domain. Yet the ruling was just the latest phase in a two-hundred year long debate over takings and the meaning of “public use.”

The Takings Clause of the Fifth Amendment was added to the Bill of Rights largely at the behest of James Madison. Like many of the other Founders, Madison had a strong commitment to property rights, and hoped to prevent the sorts of violations of those rights that were common occurrences under British colonial rule, and in some state governments after independence.

There was little discussion of the meaning of “public use” during the Founding era. But such as there was lends support to a narrow interpretation, under which a “public use” only exists if the condemned property is taken for a government-owned project, or a private entity that has a legal obligation to serve the entire public, such as a public utility. As Supreme Court Justice Samuel Chase put it in a famous 1798 opinion, the Constitution does not permit “a law that takes property from A. and gives it to B.” Eighteenth and nineteenth century courts had little occasion to address the meaning of the federal Public Use Clause because the Bill of Rights at that time applied only to the federal government, and virtually all takings were conducted by state or local authorities.

Yet an active debate over the meaning of public use did arise at the state level. By the early nineteenth century, nearly every state had included a public use provision in its state constitution similar to the federal one. Over a period of several decades, many state supreme courts issued rulings interpreting the meaning of public use, often in cases involving condemnations for privately owned roads, railroads, or mills. Some courts adopted a broad interpretation of public use similar to that which prevailed in Kelo. But, by the post-Civil War era, a clear majority endorsed a narrow approach, limiting the use of eminent domain to government-owned projects and private ones that were legally open to the general public. Leading nineteenth century jurists and treatise writers, such as Michigan Supreme Court Justice Thomas Cooley, also advocated the narrow view. It had clearly become the dominant view in the legal community by the time the enactment of the Fourteenth Amendment made the Fifth Amendment and the rest of the Bill of Rights applicable to the states in 1868.

Supporters of the narrow view argued that it was true to the text and history of state and federal public use clauses. They pointed out that the broad view would essentially make the term “public use” superfluous, as virtually any transfer of property to a private party might benefit the public in some indirect way. As the Supreme Court of Ohio put it in 1884, “[t]he prosperity of each individual condues, in a certain sense, to the public welfare, but this fact is not a sufficient reason for taking other private property to increase the prosperity of individual men.” Advocates of the narrow approach feared that the broad view would endanger the security of property rights, and allow powerful interest groups to use eminent domain to take property away from weaker owners and transfer it to themselves. The history of nineteenth century takings on behalf of powerful business interests lent credence to such concerns.

Beginning in the early twentieth century, the narrow view of public use and judicial protection for property rights generally came under sustained attack from Progressives, who argued that it protected the wealthy against the poor, and prevented government planners from effectively promoting economic growth and combating various social ills. The Progressive critique of constitutional property rights largely triumphed in the New Deal revolution in jurisprudence, in the wake of the Great Depression. By the 1950s, most state courts had endorsed the broad view of public use. The federal Supreme Court unanimously adopted it in the 1954 case of Berman v. Parker, which ruled that a public use could be virtually anything that a legislature concluded might promote the public interest.

Berman upheld a taking in Washington, DC that was part of an urban renewal project that forcibly displaced some 5,000 poor African Americans. In the decades after Berman, hundreds of thousands of people – most of them poor racial minorities –were forcibly displaced by similar “blight” and urban renewal condemnations. The triumph of the broad definition of public use also permitted condemnations in nonblighted areas in order to promote “economic development” – most notably in the 1981 Poletown case in Detroit, where some 4,000 people and numerous businesses were displaced to make way for a General Motors factory. As in the nineteenth century (but on a much larger scale), many private-to-private condemnations were undertaken in part at the behest of influential business interests which expected to benefit.

The enormous harm inflicted by blight and economic development takings attracted critics on both the right and the left, such as the famed urban development theorist Jane Jacobs, anti-corporate activist Ralph Nader, and libertarian economist Martin Anderson. Over time, Progressive and New Deal-era confidence in the use of eminent domain by government planners began to erode.

Nonetheless, in the decades following Berman, most legal experts believed that the debate over public use had been definitively resolved in favor of the broad view. As late as 2002, a treatise on takings by two distinguished legal scholars stated that “nearly all courts have settled on a broader understanding [of public use] that requires only that the taking yield some public benefit or advantage.” This consensus was never quite as complete as many believed. A few state supreme courts rejected the broad view even at the height of its dominance in the 1950s and 1960s. In the 1990s and early 2000s, several more ruled that economic development takings violate their state constitutions.

But it took the firestorm generated by Kelo to drive home the point that the post-New Deal consensus had truly evaporated. While the broad view prevailed, it did so by a razor-thin margin, over strong dissents by Justices Sandra Day O’Connor and Clarence Thomas. O’Connor, in particular, was known as the quintessential moderate on the Court. Before Kelo, advocates of a more restrictive approach to public use could be dismissed as isolated extremists. With Justice O’Connor and most of the American public on their side, such views were now firmly part of mainstream legal discourse.

In the wake of Kelo, a renewed debate over public use has emerged among judges, legal scholars, and others. Several state supreme courts have rejected Kelo as a guide to the interpretation of their state public use clauses – a hostile reception very much at variance with the widespread agreement that greeted Berman in the 1950s.

In some ways, the debate over public use has returned to its 18th and 19th century origins. Mid-twentieth century confidence in government planning has been challenged by advocates of property rights who seek to revive some of the ideas of the Founding Fathers and nineteenth century defenders of the narrow view. Ten years after Kelo, the ultimate outcome of this struggle is far from clear. But, thanks in part to the Court’s highly unpopular ruling, supporters of strong public use constraints on takings are in a better position today than at any time since the New Deal.