25 Years Ago Saddam Invaded Kuwait. The World Was Never the Same Again.

Tom Clifford worked in Qatar with Gulf Times from 1989-992 and covered the Gulf War for Canadian, Irish and other media orgainsations. 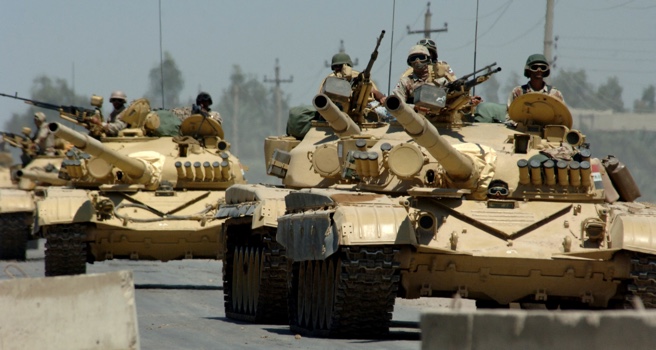 A quarter of a century ago, the guns of August were unleashed and they still reverberate.

In the immediate aftermath the atmosphere in the Persian Gulf was almost surreal. After 100,000 Iraqi troops and 700 tanks drove into Kuwait on August 2, 1990, I was questioned by police in the Qatari capital, Doha. Just days before the invasion, the page 1 headline on the British newspaper The Independent screamed: “Iraqi tanks mass on Kuwait border.” I went over to our translator at Gulf Times in Doha, where I then worked as the sports editor, to tease him. See, there is going to be war, I said though I did not really believe it. As so often in the past when I teased him, Ismail Harb would light a cigarette, sip his tea, and assure me  that no Arab country had ever invaded another. Saddam wants money, not war, he intoned.

Unknown to me, Ismail had just got his own show on Qatar TV. A day after the invasion Ismail told his viewers; How is it, how is it that an Irish journalist could tell there would be war and not one Arab journalist predicted it?

That night, the police raided the newspaper’s office. Where is Tom, they shouted. I identified myself.

How did you know, what information did you have?

It was on the papers, I replied.

Show us, they demanded.

I pointed to the yellowing stack of Independents and the top one with the tanks’ headline.

There, see the headline, I pleaded.

Do not read foreign newspapers, they said, in terms that allowed no dissent.

Ten minutes later, a newspaper in Saudi Arabia contacted us, unsure how to give the news. Saudi Arabia did not officially announce that Kuwait had been invaded for two days.

How is this for a headline, one of their English-speaking editors earnestly asked over the phone: “Brotherly Iraq invades sisterly Kuwait in slight misunderstanding.” He wasn’t joking.

The headline was never used but the two incidents reveal much about the sense of panic, disbelief and sheer incredulity of those days in August 1990.

Then CNN appeared. Up until then, Qatar and Gulf TV generally was non-descript and deliberately bland. Aimless talk shows on local celebrities, chefs displaying their culinary skills, places in the desert to drive to were served up with monotonous regularity. Headlines were dominated by one sheikh visiting another sheik to boost mutual understanding and strengthen ties. Then in August CNN became available. “Live from Atlanta, the latest on the Crisis in the Gulf.” For Gulf viewers, this was incredible.

In examining the run-up to the war, the importance of one agreement is often overlooked. In 1975 Iran and Iraq signed the Algiers Accord. This agreement of convenience suited both Saddam, who was increasingly in power but not in office until 1979 and the Shah. It demarcated their disputed borders and allowed Saddam to crush the Kurds in the north of Iraq, who had been getting help from Iran. But it also de facto established the Shah as the Gulf’s Policeman. This was a role that Saddam cherished but was not yet ready for. When the Shah was overthrown, Saddam, with the blessing of Washington, became the Policeman and was encouraged and paid handsomely by the Gulf sheiks to topple the Ayatollah whose Shia revolution they saw as a direct threat to their Sunni power.

In August 1980 Saddam visited Riyadh, where the green light was given and in September, Iraq invaded Iran. It was meant to be all over by Ramadan. Iran, the feeling went, was in turmoil, its officer corps decimated through exile or executions and its Shah-era US supplied equipment was lacking spare parts. Piece of cake. Then the trenches were dug, poison gas used and a war of attrition ensued. Eight years later it ended but like 1918, the seeds of further conflict were sown. Both countries were exhausted and financially fragile. Whatever his shortcomings in executing the war, Saddam felt he had saved the Gulf sheikdoms and was worthy of greater respect, especially from Saudi Arabia and Kuwait. Above all, he wanted more money. But the price of oil was falling. Just weeks before the invasion in 1990 Kuwait had raised its oil production from the OPEC quota of 1.5 million barrels a day to 1.9 million, further lowering the oil price from  $18 to $14. A $1 a barrel fall cost Saddam $1billion a year, and he was being shortchanged and losing face, he claimed.

Saddam also accused Kuwait of stealing its oil by boring at a slant northwards along their frontier. Kuwait haughtily dismissed these claims. Saddam was not convinced and accused the emirate of blatantly stealing the resources of the nation whose armies saved it from Iran's revolution. Saddam was the Policeman. Now he wanted to be the law. Images of invasion, human hostages, Desert Shield, Desert Storm, anti-aircraft flak, Scuds and wailing sirens, precise missile strikes and billowing dark smoke from burning wells flooded our TV screens.

The last major conflict before the onset of the Internet, this one was a TV war with nightly highlights. It ended on February 28, weeks before the start of Ramadan in March.