Dr. Lawrence Wittner (http://lawrenceswittner.com) is Professor of History emeritus at SUNY/Albany. His latest book is a satirical novel about university corporatization and rebellion, What’s Going On at UAardvark? This article was first published in LA Progressive. 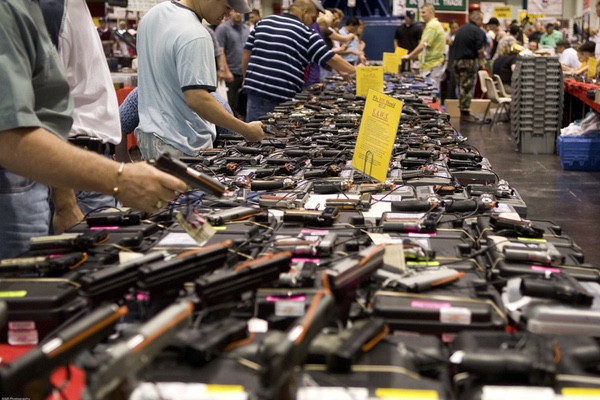 Visitors at a gun show - Wikipedia

Where do American Christians stand on guns and gun-related violence? Christianity, after all, is a religion that professes love and peace. Admittedly, the Christian Bible’s frequent depiction of Christ (“The Prince of Peace”) as rejecting violence seems contradicted by his remark that he had come not to bring peace, but a sword. But this statement can be interpreted as meaning that his preaching would cause religious divisions in society, rather than that he approved of the spread of weapons and war.

Also, of course, Christians are supposed to revere the Ten Commandments, which include the injunction: “Thou shalt not kill.” Not surprisingly, then, during the first three centuries of the Christian church, it was staunchly pacifist. And even thereafter, Christianity has often emphasized turning the other check and loving one’s enemies. So you would expect that, by a wide margin, American Christians—and particularly Protestants, who emphasize their return to early Christianity—would reject the plague of guns and gun violence that has engulfed the United States.

But you would be wrong.

According to the polls, white evangelical Protestants are the U.S. religious group most likely to have access to guns, with 57 percent of them living in homes with one or more persons owning such weapons. The runners-up are the less numerous white mainline Protestants, 55 percent of whom have one or more gun owners in their households. By contrast, only 31 percent of Catholics fall into this category, while Jewsappear even less likely to live among people packing guns.

How should this white Protestant (and particularly white evangelical Protestant) fondness for gun ownership and hostility to gun control be explained? After all, there should be something disturbing to people committed to love and peace about the fact that, among all economically-developed countries, the United States has by far the highest rate of gun-related murders in the world—indeed, about 20 times the average for the next 30 countries on the list. Also, 87 percent of white evangelical Protestants describe themselves as “pro-life.”

The embrace of guns by many white Protestants is bolstered by a number of arguments linked to their religious assumptions. One contention is that the United States was established by God and, therefore, the Second Amendment to the Constitution (which they allege guarantees individual gun ownership) is sacred. Another is that depriving people of “self-defense” deprives them of a God-given right. In addition, they tend to believe that corrupt, un-Christian values, rather than the easy availability of guns, lie behind the frequency of gun massacres.

Mike Huckabee, who has a strong appeal to white Protestants, particularly of the evangelical variety, often draws upon these themes. “We don’t have a crime problem, or a gun problem, or even a violence problem,” he said on Fox News after one massacre. “We have a sin problem. And since we’ve ordered God out of our schools and communities . . . we really shouldn’t act so surprised when all hell breaks loose.”

If gun murders simply reflect a turning away from God, though, it’s hard to understand why gun violence is so much more prevalent in the United States than in other economically developed countries. Americans, after all, are much more religious than people in other developed nations. According to a 2009 Gallup poll conducted in 114 countries, 65 percent of respondents in the United States said that religion played an important role in their daily lives. By contrast, only 30 percent said that in France, 27 percent in Britain, 24 percent in Japan, 19 percent in Denmark, and 17 percent in Sweden. Similarly, the murder rate in the American South — where the white Protestant Bible Belt is located—has long been the highest in the United States.

A more satisfactory explanation for the unusually high rate of U.S. gun murders and massacres might lie in the fact that other countries have strict gun control laws that have limited gun ownership and use. And this, in turn, might result from the fact that they do not labor under the burden of a predominantly evangelical white Protestantism, committed to gun-owners’ “rights” at all costs.

Given the size of this constituency in American life, as well as its disproportionate influence in American politics, gun killings—which claim some 30,000 American lives each year—are unlikely to taper off soon. Indeed, racists, religious fanatics, the mentally ill, criminals, police, and, yes, average Americans will continue to gun down their neighbors with great frequency year after year. As Sarah Palin, an evangelical Protestant, told her enthusiastic followers: “We say keep your change, we’ll keep our God, our guns, our constitution.”