Do You Remember William P. Rogers?

Dr. Justin P. Coffey is Associate Professor of History at Quincy University. He is the author of Spiro Agnew and the Rise of the Republican Right, to be published in October 2015 by Praeger Press. 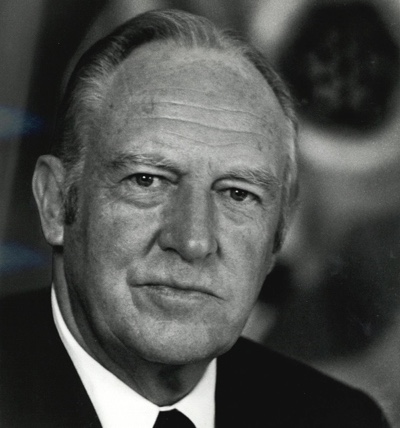 William P. Rogers is a name most Americans today do not know. The former Attorney General under Dwight Eisenhower and Secretary of State for Richard Nixon is a forgotten man. It is doubtful that many even know Henry Kissinger was not Nixon’s only Secretary of State, in fact Kissinger held that position under Nixon for less than a year. Anyone looking to learn about Rogers’s life and legacy would have to rely solely on the internet since there are no biographies of Rogers. Why is Rogers such an obscure figure?

The easy answer is that Rogers was not a significant figure. Although he was Attorney General under Ike, his tenure began in late 1957, after the Little Rock crisis, the gravest legal challenge during Eisenhower’s two terms. If he did not leave much of a mark as Attorney General, he seemingly left almost none as Secretary of State. From January 21, 1969 to the day of his resignation, September 3, 1973 Nixon all but ignored Rogers. Key foreign policy decisions were made by Nixon and National Security Advisor Kissinger. For example, Rogers had no knowledge that Nixon and Kissinger were negotiating with China to establish diplomatic relations. Nor was Rogers in any way involved with the talks with North Vietnam about ending America’s involvement in that war. If Nixon had no use for Rogers, why should the history books?

The answer is … because William Rogers was not insignificant. He played a key role in some of the crucial political and legal battles of post-war America. As Attorney General, Rogers battled with recalcitrant Southern states over the right to vote. While in private practice Rogers argued before the Supreme Court in the New York Times v. Sullivan case, as Secretary of State Rogers offered the first comprehensive Middle East peace proposal, and during the Reagan years he held a number of important posts.

Rogers’s life was one of success. Born in Norfolk, New York in 1913, Rogers attended Colgate University and then earned a law degree from Cornell. He joined the Manhattan District Attorney’s Office and helped Tom Dewey in his battle against organized crime. During World War II, Rogers served in the Navy. He fought in the battle of Okinawa and survived two kamikaze attacks. He then went to Washington D.C. In 1953 Dwight Eisenhower appointed Rogers as Deputy Attorney General and four years later, when Herbert Brownell retired, Rogers succeeded him to the post.

During the 1960s Rogers practiced law and took part in one of the most important First Amendment cases in American history, New York Times v. Sullivan. The case centered on a lawsuit filed L.B. Sullivan, a city commissioner for Montgomery, Alabama, against the New York Times. Sullivan argued an advertisement published in the newspaper was defamatory. An Alabama jury ruled in favor of Sullivan. The Times appealed and the case, along with a number of other libel suits from Alabama, made their way to the Supreme Court. The Court ruled that public officials needed to prove malice when suing news publications for libel or slander. Rogers argued in front of the justices that the Sullivan suit was a “perversion of the judicial process” and that the judgment in the case by the jury was the “most serious threat to freedom of the press in this country.” Eventually the Supreme Court overturned the verdicts and ruled that public officials needed to prove “actual malice” when suing a news publication.i

In 1968 President-elect Nixon asked Rogers to serve as Secretary of State. Rogers accepted and he had every reason to believe he would play an important role in the administration, for over the previous two decades Nixon had turned to Rogers for advice and counsel. The two men met in 1948, when Nixon and the House Committee on Un-American Activities (HUAC) was investigating Whitaker Chambers’s allegation that Alger Hiss was a communist spy. When Chambers gave Nixon information documenting Hiss’s espionage, Nixon took the information to Rogers, who was the chief counsel for the Senate Internal Security Subcommittee. After examining the evidence, Rogers concluded that Chambers was telling the truth when he said that he had known Hiss. The two developed a good working relationship. Rogers was with Nixon during many of his most crucial moments. Rogers was at the El Capitan television studio when Nixon delivered his “Checkers Speech.” Three years later, in 1955, when Vice President Nixon learned that Dwight Eisenhower had suffered a heart attack, the first person he called was Rogers.

As president, however, Nixon largely ignored Rogers’s advice. He wrote in his memoirs that he was going to run foreign policy out of the White House. Nixon often assigned Rogers thankless tasks. In one particularly difficult assignment, Nixon had Rogers be the one to inform the Japanese that Nixon was going to visit China and begin the process of normalizing relations between the two countries. Kissinger believed Nixon was exacting a measure of revenge, for Rogers had been the person Nixon relied on during some of his crises. In his three-volume set of memoirs, Kissinger was cruelly kind to Rogers. The two men repeatedly clashed, with Kissinger wining most of the battles. A disillusioned Rogers resigned as Secretary of State in August 1973, and remained bitter over his treatment by Nixon and Kissinger for the rest of his life.

To his credit, Rogers didn’t seek revenge on Nixon and Kissinger. Rogers was one of the few Nixon men who didn’t write a memoir. There certainly is no shortage of memoirs from Nixon’s aides, especially those who served time, and most used the opportunity to settle old scores. Nixon wrote RN and Kissinger published a three-volume set of memoirs. Both men sought to take credit for the China initiative and the nuclear arms agreement with the Soviet Union, while blaming the other for some of the foreign policy failures. These memoirs were self-serving and at times not very reliable. Rogers was one of the few Nixon men who didn’t take part in any of the machinations of the Nixon administration. Though Kissinger did not commit any crimes, he approved of the wiretapping of journalists who broke stories about the secret bombing operations in Cambodia. Rogers’s propriety was never questioned and on a number of occasions he refused to carry out Nixon’s orders, believing them to be either ill-advised or even illegal.

After resigning as Secretary of State, Rogers returned to practicing law but also continued to be a public servant. In March 1982, President Ronald Reagan took part in a computer-simulated nuclear war game. Because Reagan was not allowed to speak at all, for fear of tipping his hand should such a war ever break out, Rogers played the president in the game. Four years later when the space shuttle Challenger exploded, President Reagan appointed Rogers to chair a commission to figure out what went wrong.

Reagan respected Rogers, as did almost all who knew him. The callous manner in which Nixon and Kissinger treated Rogers has obscured his legacy. I have just begun researching Rogers’s life and career for a biography I plan to write. I believe that he deserves to be remembered and hope my work will bring the life and legacy of William P. Rogers to light.