This Myth Obscures the Surprising Truth About the Confederacy 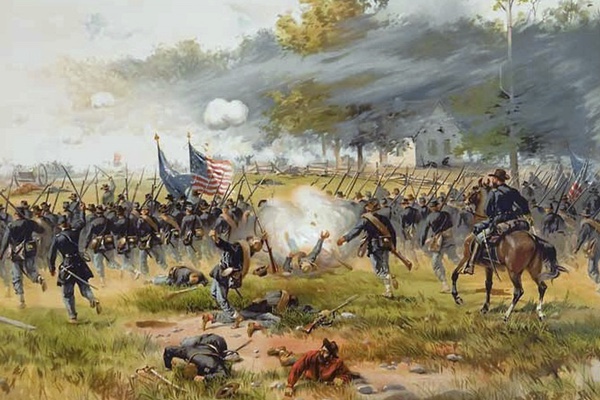 The Battle of Antietam - Wikipedia

In the national outcry over the Charleston Massacre, and the ensuing debate over the Confederate flag, most people white and black have assumed that the entire population of Southern whites supported the Confederacy in 1861.

Nothing could be further from the truth. In fact, perpetuating this false stereotype only serves the interests of the plantation class and those who support those values today.

In every American war, from the Revolution to the U.S. invasion of Iraq, some citizens have opposed the war effort. That was true for the Civil War. The country broke up in the aftermath of the presidential election of 1860, when the voters had to decide, should slavery expand into the trans-Mississippi West? The issue was not states rights per se, or the abolition of slavery in the U.S., but the expansion of slavery.

Four candidates ran in that election, and they offered voters a clear choice. The Republican Abraham Lincoln of Illinois stated that the expansion of slavery had to stop. The Democratic Party could not agree on a candidate, so two candidates ran: John Breckinridge of Kentucky, who insisted that the slave states should secede if anyone tried to stop slavery’s expansion, and Stephen Douglas of Illinois, who argued that the decision should be made by the territorial legislatures, before statehood.

The forgotten man of the election, Senator John Bell of Tennessee, ran as a Unionist candidate. He declared that all political issues should be resolved within the Union—that no political issue was important enough to justify secession. A former Whig, like Lincoln, he began a political independent when the Whig Party collapsed in the 1850s.

John Bell won three states in the election—Virginia, Kentucky, and Tennessee—and lost Missouri by approximately a thousand votes. He took about a third of the vote in Alabama and North Carolina. Overall, some 40 percent of the voters in the slave states voted against secession. (In 1860, the electorate in the slave states, and the free states, consisted only of white men.) We have to remember that some three-fourths of the white Southern population did not own a single slave, so the expansion of slavery was not in their opinion worth seceding from the union.

After Fort Sumter, a significant portion of the white Southern people opposed the war effort. These unionists undermined the Confederate war effort in a variety of ways, and some of them ended up in Southern prisons for speaking out against the government. When the Confederacy instituted a draft in 1862, there was widespread draft resistance, especially among working-class white Southerners. Approximately 100,000 white men from the South made the ultimate statement of loyalty and fought in the Union army. The Confederacy was so deeply divided that some historians believe that is the principal reason it lost the war.

So when white Southerners proclaim that the Confederate flag represents their history, they are misrepresenting their own history. Some of their ancestors opposed the war effort, and some of them fought for the United States flag. The myth of the united South is just that—a myth. Taking down the Confederate flag honors the unionists of the South, whose memory should also be preserved.