This is One Reason the World Is on Fire 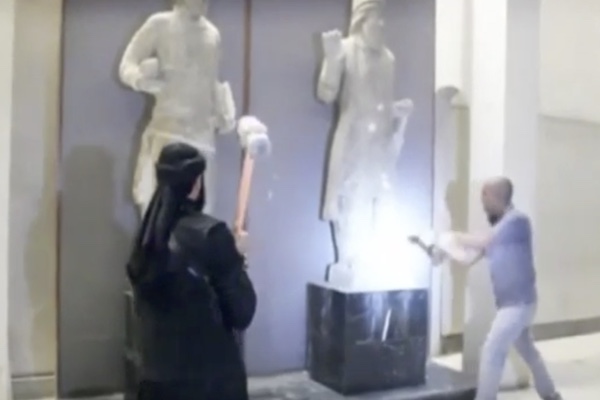 Part I -  Importing the “Divine Past” into the Present

Prior to the 18th century - that is prior to the Enlightenment - if you had asked a literate Westerner when he or she thought the most ideal of human societies did or would exist, most of them would have located that society in the past. The religious majority might have placed it in the biblical age of Solomon or the early Christian communities of the 1st century after Christ. Both would have been considered divinely inspired times. Now, come forward a hundred years, say to the beginning of the 19th century, and ask the same question. You would notice that the answer was beginning to change. Having passed through the Enlightenment and with the Industrial Revolution in process, the concept of continual progress had been invented, and with it some (but by no means all) people started to place that hypothetically ideal society in the future. For the futurists the question of divine guidance no longer mattered.

Today, many folks worldwide believe in progress and assume that tomorrow not only will be different from today, but will in some scientific-technological way be better. The question here is not whether they are correct, but why there isn’t a unanimous consensus in favor of progress - for clearly there is not.

The truth is that there are millions of people, Muslims, Jews and Christians and others who not only still idealize a religiously imagined past, but want, in one way or another, to import that past into the present - and not only their present but everyone else’s as well. Whatever one might think of the teachings of the Bible and Quran, this is a highly problematic desire. In fact, it is downright dangerous. The following examples will prove this point.

The Guardian newspaper recently carried a shocking article entitled “Isis Slave Markets Sell Girls .…” As the story goes, ISIS, or the self-proclaimed “Islamic State,” has set up slave markets where young girls are sold. Most of the girls seem to be war booty acquired during raids on areas populated by minorities, such as the Yazidis, who are not considered Muslim.

According to the Zainab Bangura, the UN envoy investigating the issue of sexual violence stemming from the wars in Syria and Iraq, the abduction of young girls is a ploy to attract male recruits. “The foreign fighters are the backbone of the fighting,” Bangura says, and  “this is how they attract young men: we have women waiting for you, virgins you can marry.”

The UN envoy then adds that ISIS seems determined “to build a society that reflects the 13th century.”  Actually, she is off by some 500 years. The time frame ISIS leadership is aiming for is the 7th century CE. That was the time of the first Islamic community, and from the ISIS point of view it was a divinely appointed one. Therefore its cultural and social practices, allegedly sanctioned by the Quran, are as legitimate today as they were in the time of the Rightly Guided Caliphs. So, first and foremost, the slave trade is sanctioned as a revival of a divine past. If it lures new male recruits, that is no doubt seen as a bonus.

From the point of view of modern secularized society, this is pretty crazy stuff. However, it is not unique to ISIS.

There is a sect of religious Jews who are equally determined to import into the present an aspect of an ancient, supposedly divine, past. Their aim is to resurrect Solomon’s temple, an artifact of the 6th century BCE. Rebuilding the original temple (which would them be called the “third temple” because the first two were destroyed by the Babylonians and Romans, respectively) would, according to the advocacy organization the Temple Institute, “usher in a new era of universal harmony and peace.”

Given that this divine import would have to be built on the site now occupied by the al-Aqsa Mosque, the third holiest place in the Islamic world, it is hard to see how peace can be the outcome. Nonetheless, according to its advocates, the Jews “have a biblical obligation to rebuild it. And, it would seem, some 43 percent of religious Israelis agree with this assertion. That means in the eyes of these particular people, the recreation of Solomon’s temple is as divinely legitimate as the slave markets run by ISIS. The major difference between the Temple Institute and ISIS is that, as of yet, the institute does not have the power to move from theory to practice.

According to TV investigative journalist Bill Moyers, Christian fundamentalist organizations with millions of members financially support Israel in order to encourage expansionism, ethnic cleansing, and preemptive war against Iran, and ultimately to trigger a third world war. What is the point of this allegedly divinely inspired mayhem? According to such Christian fundamentalist sages as John C. Hagee, all of this is necessary to pave the way for the Second Coming of Christ. Hagee knows this is so because he read it in the apocalytic writings of the New Testament.

And just who might have sympathy with such dangerous efforts to transform the present on the basis of dubious past prophecy?  How about Ronald Reagan, George W. Bush, and Tony Blair, along with growing numbers of voters and legislators both in the U.S. and the UK?

How is it possible, in our scientific age, that millions, including powerful political leaders, hold to such dangerous beliefs? Obviously the Enlightenment and its humanistic teachings did not work for everyone, and even the Industrial Revolution, in its capitalist manifestation, has proved persistently unsettling. That is, unsettling to community based on age-old - and allegedly divine - principles. After all, seemingly divine teachings were the basis for Western societies, as well as those in the Middle East, for over a thousand years. Counting from the Enlightenment, competing modernity has only been around for three hundred or so years.

In other words, our material world might be thoroughly grounded in applied electrical engineering and computer science, but for a surprising number of us, the emotional world seems to still be grounded in the imagined words of God. No wonder religion in all its various forms makes periodic comebacks. As part of this phenomenon, some of us select a part of the “divine past” as our ideal time. Some of us even convince ourselves that the world would be so much better if we could reconstruct the present along the lines of that imagined past.

Of course, most of those who think this way never get enough power and influence to actually move from theory to practice.  Occasionally, however, someone, or some group, does. In the case of the Islamic world, the leaders of ISIS seem to have achieved this status, and so what do we get? Slave markets. In Israel the Knesset is full of folks who yearn for the some variation on biblical Israel, so what do we get? Well, if not yet the rebuilding of Solomon’s Temple, we get all that illegal expansion into “Judea and Samaria.” And, in the case of the Christians like George W. Bush and Tony Blair, both of whom seem to have used their worldly power to kill and maim millions in the name of prophecy, we get one war after another.

This suggests that the socio-religious outlook of Solomon, Mohammed, and Jesus Christ are simply not translatable into the modern world. Oh sure we have the Ten Commandments and all that. However, adherence to these rules should no longer be enforced as the word of God. In the West at least, they are, in a selective, updated fashion, part of the promulgated laws of multi-cultural communities - no more and no less - and it is best to keep it that way.

So let’s show some appreciation of the Founding Fathers of the United States of America. When they separated religion and government, they had a strong and accurate sense of history. It was a good move, even if not a divinely inspired one. It was also the implementation of a fine Enlightenment principle - a good match for modern society.