The Countess Who Bested Shakespeare

Dr. Chris Laoutaris is a Lecturer and Birmingham Fellow at The Shakespeare Institute in Shakespeare’s birthplace of Stratford-Upon-Avon. He is the author of Shakespeare and the Countess, out now from Pegasus Books. 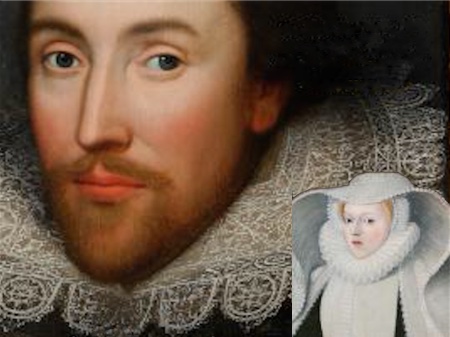 In the celebrated prologue to Romeo and Juliet, William Shakespeare immortalized the “pair of star-crossed lovers” whose tragic fate was determined by “two foes” — their warring families whose “new mutiny” had risen from an “ancient grudge.” In 1596, close to the time when the playwright penned these famous lines, he was facing his own foe: Elizabeth Russell, a woman who is largely unknown today, yet who nearly stopped Shakespeare’s career dead in its tracks.

In 1596, Shakespeare was facing a crisis. The playhouse in Shoreditch known as the Theatre which hosted Shakespeare’s early career was in jeopardy, as the lease for the land on which the Theatre was built was due to expire in April 1597. For the Chamberlain’s Men, the theatrical troupe to which Shakespeare belonged, the future seemed uncertain, with no secure playing venue and no guaranteed means of income on which to pin their hopes. But theater impresario James Burbage had a plan to save Shakespeare and his fellow actors from ruin.

Taking a gamble, the entrepreneur sunk a fortune into a new theatrical venture in London’s up-market Blackfriars, acquiring part of a dissolved monastery complex with the intention of converting it into a new state-of-the-art playhouse. As the builders set to work, Shakespeare saw the promise of a brighter future taking shape with every new brick and beam. He had every reason to feel optimistic. Unlike the Shoreditch Theatre, an amphitheatre-style playhouse which was open to the elements and could only function during the warmer months, the Blackfriars Theatre would have a roof which meant that the company could mount plays there all year round. Boasting the most cutting-edge staging technology, this luxuriously appointed playhouse would cater to a more affluent clientele prepared to pay much steeper ticket prices. Unfortunately for Shakespeare and his business partners, just a few paces north of these renovations – less than 187 feet, to be precise – lived a woman who was not happy at all about her prospective new neighbors.

Elizabeth Russell, the self-styled Dowager Countess of Bedford, was one of the most learned women in Europe. Her father, Sir Anthony Cooke, had been tutor to the young King Edward VI and had nurtured his daughters’ talents with equal rigor. So advanced was their curriculum – which included training in Greek, Latin, and other European languages, as well as the most challenging works of philosophy – that one contemporary referred to their home, Gidea Hall in Essex, as a “university ... in which the studies of women were thriving.”

Shakespeare’s new nemesis was also well-connected. Her brother-in-law was William Cecil, Elizabeth I’s Lord Treasurer; her nephew, Robert Cecil, was the Secretary of State; and her kinsman and next-door neighbour in the Blackfriars was William Brook, Lord Cobham, the Lord Chamberlain. All three of these men held coveted places on the Queen’s Privy Council. With these credentials, it is hardly surprising that Elizabeth Russell would develop a formidable personality to match her impeccable breeding and social status.

If you had ever come face to face with Lady Russell, you would have sensed that she was not a woman to trifle with. Her piercing eyes staring out from a broad starched widow’s headdress made her look like a cobra ready to strike its victim. Instigating riots and engaging in pitched battles with a band of her own armed henchmen in tow were, for her, the order of the day; she had been involved in several armed clashes during her controversial career. Some of her enemies had discovered that crossing her could mean spending days or even weeks locked in the stocks in her own personal prison, which she had constructed in the grounds of her country residence, Bisham Abbey in Berkshire. Even a bailiff, who had thrown caution to the wind and arrested one of her servants, was served a taste of his own medicine after the incensed Dowager wrestled the prisoner from the official’s grasp “with strong arm” before incarcerating the bailiff in her own dungeon. The ransom she demanded for his release was so huge that the Queen herself had to intervene to prize the poor officer from Lady Russell’s clutches.

Angering Elizabeth Russell, therefore, was not a good idea — but the backers of the Blackfriars Theatre found this out too late. In November 1596, after discovering that a playhouse was about to open its doors in her genteel district, she led an uprising against Shakespeare’s company. In a thoroughly modern act of nimbysim she drew up a petition and managed to convince 30 of her neighbors to join the crusade. This document was addressed to the Queen’s Privy Council, and demanded that this “common playhouse” be prevented from opening before “all manner of vagrant and lewd persons” descended on the area to “work all manner of mischief.” Astonishingly, among the names on the petition are those of Shakespeare’s patron, George Carey (the Lord Hunsdon), and his publisher, Richard Field. With a flourish of their quills, they sparked an enduring mystery at the heart of Shakespeare’s life: How could the two men who stood to gain the most from the dramatist’s success have betrayed him? In Shakespeare and the Countess, I set about finding the answers.

Just why was Russell so worked up? She certainly wasn’t happy about the noise from rowdy theatregoers and the threat of the spread of the plague in the confined space of an indoor playhouse, but at the heart of the protest was something else entirely. Russell — one of the district’s staunchest Puritans — feared the disruption to the nearby services of her favoured St Anne’s Church, a notorious stronghold for religious radicals. In fact, nearly a third of those who signed her petition were closely involved with the running of this church, as preachers, wardens or assistant wardens. One such – and this has remained entirely unknown till now – was Shakespeare’s publisher, Richard Field, who had served as an administrator. It seems that Field’s sense of obligation to his fellow radicals outweighed his devotion to Shakespeare, despite the fact that they both hailed from Stratford and had attended the same school. But Field’s secret career as a cog in the administrative machine of St Anne’s was not the only revelation I made during my research for the book.

The precise location of Field’s printing press, which had first given birth to Shakespeare’s works as consumer products outside the theatre, had been lost for four centuries. By piecing together the evidence from long-forgotten leases, letters and dusty sale agreements, I was able to determine that the press stood directly next door to the home of Elizabeth Russell. Field could not have escaped the Dowager if he’d tried. And neither could Shakespeare’s patron, Carey — he was related to her through marriage (his sister Margaret had wed Russell’s son, Edward Hoby), and his own mansion stood just beneath the theater.

So what did Shakespeare think of all this? A clue lies in his works. Henry IV, Part 1 originally included a character named Sir John Oldcastle, a cowardly and drink-loving knight, who had a buffoonish comrade-in-arms called John Russell. Oldcastle was based on a noble ancestor of Elizabeth Russell’s kinsman the Lord Cobham, and the character of “John Russell” was given the very name of the Dowager’s late husband. Both characters were censored in the final version of this play because the Lord Cobham, in his capacity as Lord Chamberlain, forced Shakespeare to remove the offending names. And thus, Oldcastle became Falstaff and John Russell was renamed Bardolph. These less-than-flattering theatrical portraits were Shakespeare’s sly way of bringing his battle with the Dowager Countess to the public stage — and it wouldn’t be his last riposte.

When Elizabeth Russell successfully shut the doors to the Blackfriars Theatre in Shakespeare’s face, things looked bleak. The company had lost two permanent venues within six months. A bitter and bankrupt James Burbage died soon after, leaving his sons, Richard and Cuthbert, with mounting debts. As a desperate Plan B, they made the bold decision to create a new playhouse on the other side of the river from the Blackfriars. The Globe was born on Bankside in 1599. In order to fund the venture, they asked Shakespeare and four other co-sharers to dig deep into their own pockets. In exchange, they were made part-owners of the Globe, entitled to a handsome share of the profits. The doughty Dowager may have crossed Shakespeare but, as fate would have it, she inadvertently secured his long-term success and his indelible association with the Globe Theatre. You might say it was written in the stars.