Richard Alston is Professor of Roman History at Royal Holloway, University of London, and the author or editor of over a dozen books on ancient Rome. His latest book is Rome's Revolution: Death of the Republic and Birth of the Empire (Oxford University Press, 2015). 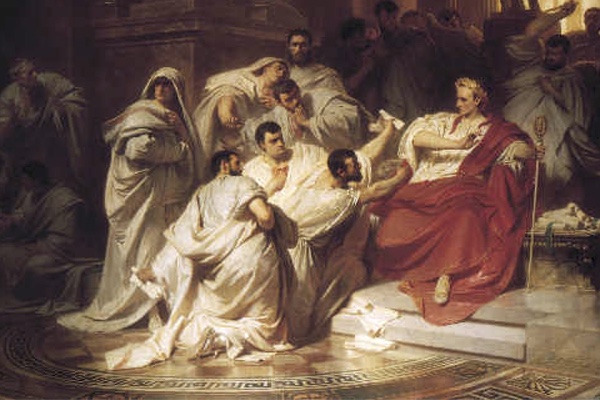 On 15th March 44 BC, Marcus Brutus and sixty of his closest friends conspired to murder Julius Caesar. Their aim was to rid Rome of its dictator (a constitutional position in Rome) and thereby restore the Republic to its former glory. Three years later, Brutus and most of his fellow conspirators were dead, Octavian and Mark Antony were masters of Rome, and nearly five centuries of Republican government were at an end. 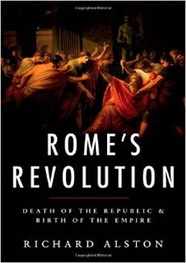 In retrospect, it is easy to think of the imperial age as inevitable: the Republic had repeatedly been torn asunder in a spiral violence over its final century, but when the assassins raised their bloody daggers to the skies, they were confident that their actions would enable the return of Republican liberties. They were catastrophically wrong, but it is not obvious why they were wrong. Furthermore, historians have never satisfactorily explained why a political system which had been so long-lasting, resilient and successful fell apart over a very short and violent period. This was Rome’s catastrophic revolution. In an age in which Western powers are engaged in state building, not only does Rome’s revolution offer insights into why states fail but it also provides uncomfortable lessons as to why anti-democratic, authoritarian and plainly vicious regimes can succeed.

Rome was not a nation. It was not identified with a particular territory (having long outgrown the confines of the city). It had no developed ethnic identity nor persuasive national myths. What held Rome together was its political culture. That culture was dominated by the senators and their families. These men not only controlled the political system, but led the armies, administered the law, and represented the people to the gods. The senators were drawn from the richest families and power and wealth was passed down the family line, from generation to generation. The power of the senators extended into every aspect of Roman life and integrated elements we tend to separate (economy, religion, politics, the military). Consequently, the res publica (which we translate as “republic” but is more accurately “commonwealth”) was identified with the social and religious order which existed under the authority of the senators.

Unlike the cities of Greece which experimented with varying constitutions, it seemed unthinkable for Rome to fundamentally change its political system since any lessening of senatorial control would seem to open the door to a dissolution of Rome itself. Perceived threats to senatorial authority could be represented as attacks on Rome itself and the violent suppression of any such challenges was justified. After every outbreak of political disorder over the previous century, senatorial rule had been restored. The assassins of 44 BC expected that there would be trouble ahead, but experience suggested that the Republic would be restored: there was no alternative.

But an alternative did emerge. In late 43, Octavian marched his legions on Rome and thereafter Rome was under military rule. The aristocracy was pillaged, their property was confiscated, and rewards paid for their heads. The money was used to reward the soldiers. Additionally, land was confiscated from the towns of Italy and used for veterans’ settlements. Perhaps as many as 700,000 people (out of a total population of about 4,000,000) were direct beneficiaries of the revolutionary violence.

In time, the regime annexed to itself the resources of the empire and used those resources to build support. Augustus fed 250,000 Romans every month. He paid 150,000 troops. Eventually, the rewards of working with the regime persuaded the surviving representatives of the old elite to make their peace. In some ways, that new order looked very like the old: the senate continued to meet, elections held and laws passed. But after 42 BC, no one could have been of the view that the senators ruled Rome. Power was concentrated in the hands of the emperors and the Republic was but a memory.

Money and violence put an end to Republican liberties. States cannot assume loyalty. Elites cannot assume subservience. People need to have a stake in their political systems: they need to draw benefits from it or they will simply not care whether it succeeds or fails.

In the West, we have lost sight of the basic realities of power: violence and wealth. In Republican Rome, the elite thought they were untouchable: they were the Republic. They had no need to earn the loyalty of the people and could scorn attempts to buy that loyalty with bread and circuses. But the poor were not so fortunate. They needed bread and land and security. The civil war put swords in poor people’s hands and they used those swords to break the power of the old aristocracy.

Against the sword, tradition, family history, and social status meant little. Quite literally, the new regime put the heads of the leading representatives of the old order on spikes in the Forum in Rome and thereby taught the elite a lesson in power politics. But in the longer term, the regime survived not on violence, but on money. By redistributing wealth, it implicated the beneficiaries in the continuity of the regime and secured the acquiescence of any who might have had ideological qualms.

Nobody much wanted monarchic rule in Rome. Nobody thought it was a good idea and the first emperors were acknowledged to be corrupt, spectacularly incompetent, and sometimes of questionable sanity. But the monarchy survived. In our modern attempts at state building, we must remember that for most people, the issue is not so much whether you like the rulers, but whether the regime will feed you and protect you. In the modern West, we assume loyalty to the state and thus fail to consider how states can secure the loyalty of their people. Rome’s revolutionaries reduced politics to its simplest form. They killed their enemies and rewarded their supporters; they fed the people and paid the soldiers. It is a recipe for success that we would do well to relearn.