Historians Should Stop Being Embarrassed by Our Wars

Vaughn Davis Bornet is a professional historian who worked for many years at RAND. His doctoral work was interrupted when the Navy called him to duty on September 25, 1941; Barracks Officer at Naval Air Station, Alameda for several years, he got out only on December 31, 1945. His book of patriotic orations and essays is "SPEAKING UP FOR AMERICA" (iUniverse, 2011). His brand new book is "LOVERS IN WARTIME, 1944-1945," about to be Amazon listed, which contains 159 romantic letters between his possible wife and himself, she at University of Nevada, he at NAS Alameda. (New essays by the author, who is in his nineties, illuminate the letters and the war experience.) 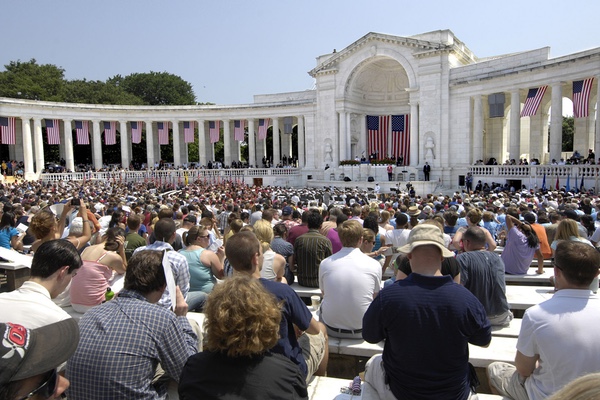 So you teach American History for a living, but you have never said “Yes” when asked to deliver an address on Memorial Day?

Can it be that you are fundamentally opposed, that is, allergic, to the very idea? You “wouldn’t be caught dead” rendering such an address, even if paid an honorarium. Time for this writer to find another reader. Without asking how you got in your present mood, I’ll be moving on.

Were the American Revolution, the War Between the States, and World War II “necessary wars?” Oh. You’ve thought of other ways out…! The goals of those gigantic conflicts could have been reached another way? No strain, no pain, no blood, no sacrifice. Especially no time spent fighting. Well, well.

Good for you! You may be a mythologist, a candidate for Ashland, Oregon’s Peace House, with its hardworking choir, its never ending propaganda about obscure individuals of yesteryear whose “solutions” would surely have worked! You can’t be persuaded that Hitler, Mussolini, and Tojo were as stereotyped: ardent propagandists, with records of wholesale killings, entranced with forcefully uniting vast numbers of humankind under their freshly laundered banners.

Let’s talk. Can you muster the energy to say something ennobling about Valley Forge? Lincoln? Wilson? (Do try to praise the idea of a League of Nations without mentioning him.) George Marshall? This is going to be harder on you than I thought. We’re talking Memorial Day, a time for praising (somewhat) those who once led us in defense of our homeland, or anyway, who engineered defense against real evildoing.

To me, it’s time to be on “the right side in human history,” sensing who was the villain in the matter of holocausts, who stood for a new life in our struggle to utilize a Declaration of Independence, and who thought Four Freedoms an improvement worth extolling. It’s time to figure out who was on the right side in those snows of Korea, and certainly whether Eastward or Westward should have prevailed as troops looked about in the Pacific. Who should we root for in those invasions in Europe, bombings in England and the Continent, and sinkings of merchant ships in enormous quantity as they hopefully traversed vast oceans.

Let’s face it. There’s a Marine Hymn, and melodies that extoll the Army, the Coast Guard and the anchors-away Navy. Do you sing along (in memory of when things went right)? Or stand there like a dolt? When your neighbor’s boy finished high school and maybe went to Quantico or Camp Pendleton, stood straighter and saluted, and came back briefly full of pride before serving his Country overseas, did you secretly hang your head?

You are a History Teacher, and the kind of history you teach has no room for military heroes who served Great Causes? Well, well. Your motto must be “Things happen, right’s right, and War is Always Bad.” Why, then, is it that when I prepare my outdoor speeches I can easily tell which side should have prevailed in Virginia after four years? Why is it easy to know that Pearl Harbor should not have been attacked? And that conquering France and bombing London were evil acts? Why do I know we need to remember, unreservedly, those in uniform who forced evildoers to surrender on the deck of the Missouri?

I have a published book of speeches I delivered on Memorial Day, Veterans Day, and at least once on Independence Day. I spoke, always, with a feeling of Rightness. I was united with “the good guys” beyond any doubt. Yes, in the wars waged by veterans there had been suffering—lots of it. There had been serious mistakes of statesmanship, before, during, and afterward. Leaders sometimes botched the job, so everybody doesn’t deserve to get “memorialized.”

We need to remember those conscientious objectors, nurses, orderlies, and noncombatants who didn’t get in the way—helping make the war less awful—praising their memory louder and more often. No doubt about it. But it was combatants who took Iwo Jima and Okinawa. My own quite Quaker mother managed to show constant pride as I weathered four years in enlisted and officer’s uniforms, September 1941 to December 1946. She didn’t approve of what war brought to us—guns and tanks and submarines—but she did approve what the VE and VJ days represented when they finally came.

So use that History of yours, well, historically, on special holidays. Don’t shrink from the obligation to praise those who served, including all who “made the supreme sacrifice” and those who in hospitals still suffer every day. They did it for us. It was for their own relatives too, of course, but overall, it was for an entity, a country discernably on the right side in human affairs (we certainly hope), one in which we should take pride.

To sum up, on Memorial Day we should show visible pride—patriotism—toward the place where we of 50 states unify in times of great crisis. Displaying the flag of the United States of America at such a time (as is customary nationwide), we think deeply on what we are, what we have done, what we should be doing, and always, without the hesitancy that immobilizes, what is right and will just have to be done.