Remember the Kerner Commission Report? Here's What You Don't Know.

Steven M. Gillon is a Scholar-in-Residence at History and Professor of History at the University of Oklahoma. This article was first published on Steve Gillon’s Huffington Post blog. 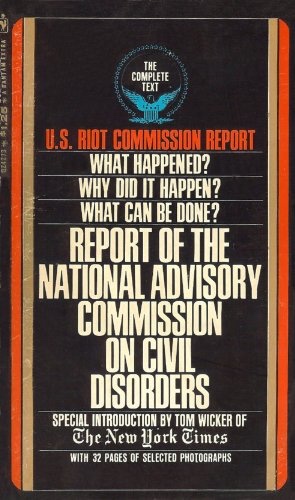 During the summer of 1967, riots ripped through dozens of American cities. In response, on July 27, President Lyndon Johnson announced the creation of the National Advisory Commission on Civil Disorders, popularly known as the Kerner Commission after its chairman, Illinois Governor Otto Kerner. The President asked the Commission to address three basic questions: "What happened? Why did it happen? What can be done to prevent it from happening again and again?"

The stakes were high: The nation was reeling from bloody riots in Newark and Detroit and fearful of more disturbances to come. "No group of American citizens have ever been given such a crucial assignment since the constitutional convention," declared the columnist Roscoe Drummond.

Over the next few months, the Commission held 44 days of private testimony, made field trips to eight cities, and heard 4,000 pages of testimony from 130 witnesses. At its peak, the Commission included 95 staff members and called upon over 200 consultants and advisers.

On February 29, 1968, the Commission released its final report to the public. It was a massive document, consisting of 17 dense chapters documenting the racial gap in America along with a list of specific policy recommendations. Most observers, however, focused on one line in the report's summary: "Our nation is moving toward two societies, one black, one white -- separate and unequal."

This sentence has become one of the most quoted in the history of American race relations. A new book I am writing on the history of the Kerner Commission tells the story of how it came about.

There were 11 commissioners, but the two who set the agenda where New York's charismatic Republican Mayor, John Lindsay, and Oklahoma's populist Democratic Senator, Fred Harris. They convinced the other commissioners to adopt an ambitious social agenda, which included increased federal spending for housing and education along with reform of the welfare system. But that was not enough for Lindsay: He insisted that the report include a hard-hitting summary that would turn a long, sleepy government report into a clear call for national action.

The mayor instructed two aides, Peter Goldmark and Jay Kriegel, to write a draft of the summary. They realized that adding new, provocative ideas to the summary would produce a war among the commissioners. So they decided to go through the report, pull out the most provocative parts, and string them together into a summary. That way if anyone complained, they could say, "It's already in the report."

In mid-January, 1968, during an all-night session at the Hay-Adams hotel in Washington, D.C., Kriegel and Goldmark combed through the report. In the section on the "Future of the Cities", they found a sentence that declared that if the nation continued in its current direction it would "lead to the permanent establishment of two societies: one predominantly white and located in the suburbs, in smaller cities, and in outlying areas, and one largely Negro located in central cities." It was great writing for a professional social science journal, but the two aides needed to translate it for the masses. In their talented hands it became: "This nation is at present moving toward two societies, one black, one white, separate and unequal."

Their version of the summary ended up on the desk of Jack Rosenthal, a journalist and former Justice Department official, who joined the Commission staff in December to serve as a general editor of the final report. Rosenthal, who was on a fellowship at Harvard for the year, took their draft back to Cambridge. Working in the evenings after he put his two young children to bed, Rosenthal rewrote most of the document, but he kept Kriegel and Goldmark's language about "two societies." He tweaked it into its final version: "Our nation is moving toward two societies, one black, one white -- separate and unequal."

If the goal of the summary was to provoke people and gain media attention, it succeeded in dramatic fashion. The report inspired one of the most intense, wide-ranging conversations about race in American history. The 708-page Bantam paperback sold 740,000 copies in just 11 days and quickly sold out. It became the fastest selling book since Jacqueline Susann's Valley of the Dolls. Most major newspapers and magazines, and all the television networks, provided extensive coverage. Nearly all the attention focused on the summary, especially the prediction that America was becoming "two societies," and that "white racism" was to blame for creating the conditions that precipitated the riots.

Not surprisingly, the public reaction to the report split along geographic and cultural lines that would become familiar to Americans. National news organizations, including the three network television stations and major newspapers like The New York Times and the Washington Post, were sympathetic. Civil rights leaders, the mayors of big cities, and liberals hailed the report. Conservatives were uniformly hostile. The Washington Star noted that it was "regrettable that the report does not put as much emphasis on forthrightly condemning riots and rioters as it does on offering excuses for them." Campaigning in New Hampshire, Richard Nixon used the report to refine his appeal to the "silent majority." On March 6, in a radio interview, Nixon complained that "the major weaknesses of the president commission is that it, in effect, blames everybody for the riots except the perpetrators of the riots."

The report generated widespread coverage from the media, but it received a cold reception from the White House. Johnson had wanted the Commission to endorse his "Great Society" programs and to demonstrate fiscal restraint. It did neither. Privately he denounced the notion that America was moving toward two societies as "catchy but insidious slander." Despite the pleas of his most senior aides, LBJ could not even bring himself to sign letters thanking the commissioners for their service. "I just can't sign this group of letters," he told aide Harry McPherson on March 13. "I'd be a hypocrite."

The spirited debate over the report came to a sudden and violent end on the evening of April 4, 1968, when Martin Luther King was assassinated while standing on the balcony of the Lorraine Motel in Memphis. Rioting engulfed more than 100 cities and towns across the nation. Once again, the President was forced to call out the regular Army and the National Guard. Any hope of forcing white America to confront the deep racial divide in the country -- however slim to begin with -- died that night.

Given the recent unrest in Ferguson and Baltimore, it's time to reignite the debate: Was the Kerner Commission prediction accurate: Have we become "two societies... separate and unequal?"