The History Wars in Ukraine Are Heating Up

by Christopher Gilley and Per Anders Rudling

Christopher Gilley is a research fellow at the University of Hamburg. He is the author of "The ‘Change of Signposts’ in the Ukrainian Emigration: A Contribution to the History of Sovietophilism in the 1920s" (Stuttgart: Ibidem Verlag, 2009).  Per Anders Rudling is an associate professor of history at Lund Univeristy, Sweden and visiting professor at the University of Vienna, Austria. He is the author of "The Rise and Fall of Belarusian Nationalism, 1906-1931" (Pittsburgh: University of Pittsburgh Press, 2014). 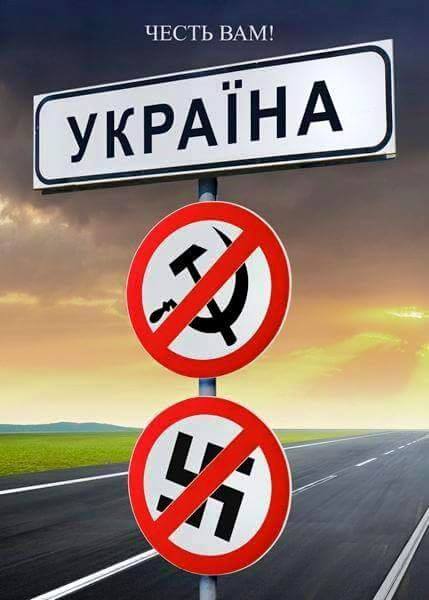 A poster equating communism and Nazism.

On April 9, 2015 the Ukrainian parliament passed a package of legislation regulating historical memory.  Two laws in particular have provoked a Historikerstreit that may define the country’s image at home and abroad.

The law places a wide-ranging ban on Soviet symbols but a much more limited ban on Nazi ones. The ban does not include the emblems beloved of contemporary Ukrainian nationalists, for example, the Black Sun and Wolfsangel, now employed by the far-right Azov battalion, or the name and badge of the 14th Waffen-SS Division Galizien. As University of Alberta professor John-Paul Himka has noted, the real aim of the law is to de-Communize Ukrainian society rather than deal with the country’s problem with the far right. One stated goal is to root out the remnants of the Soviet mindset supposedly held by parts of the Ukrainian population. In the eyes of the law’s authors, Soviet nostalgia is partially responsible for the country’s present woes.

Law No. 2538-1 “On the Legal Status and Honoring of the Memory of the Fighters for the Independence of Ukraine in the 20th Century” lists a series of organizations whose members it declares to be fighters for the independence of Ukraine and whose memory must be honored. The last section stipulates that Ukrainian citizens and foreigners who “publicly insult” the fighters for independence “harm the realization of the rights of the fighters for independence” and, consequently, “will be held to account in accordance with Ukrainian law.” It adds that  public denial of the legitimacy of the struggle for Ukrainian independence “mocks the memory” of the fighters and “insults the dignity of the Ukrainian people”; it is therefore “illegal.” The law specifies no punishments nor does it explain which body will be responsible for implementing it.  However, one individual involved in drafting the legislation has stated that any private person will be able to bring a case to court if they think that the law has been violated.

The initiative for both laws came from Yuri Shukhevych, son of the Ukrainian Insurgent Army (UPA) commander Roman Shukhevych, a former political prisoner and a deputy in the Rada for Oleh Liashko’s Radical Party. Volodymyr V’iatrovych and other members of the Ukrainian Institute of National Memory (UINP) were involved in drafting the laws. The UINP is a government agency instituted by president Viktor Yushchenko in 2006 as part of his agenda to intrumentalize history; consequently, it was strongly associated with his Geschichtspolitik.

The intitiative to turn Roman Shukhevych and Stepan Bandera into national heroes originated with the UINP. President Viktor Yanukovych (2010-2014) reversed his predecessor’s  history policies; the institute lost its ideological duties and was headed by a member of he Ukrainian Communist Party. After the overthrow of Yanukovych, it was again reassigned ideological tasks under the directorship of Volodymyr V’iatrovych, perhaps the most prominent glorfier of the Organization of Ukrainian Nationalists and the Ukrianian Insurgent Army.

One must first state clearly: Law No. 2538-1 is, as history, nonsense. The groups whose members were supposedly “fighters for the independence of Ukraine” contained Ukrainian socialists, Russian monarchists, peasant insurgents, Ukrainian far-rightists and Soviet dissidents. Many people belonging to the bodies on this list actually opposed Ukrainian independence, and some even supported the creation of the Soviet Ukrainian Republic or became members of the Communist Party of Ukraine. The groups named include bitter political rivals that, in some cases, repeatedly insulted each other and, in others, actually fought and killed one another.  Thus, Oleksander Shums’kyi, Bolshevik commissar of education in 1923-27, is now a fighter for the independence of Ukraine. Another is Mykhailo Hrushevs’kyi, who today is celebrated as the father of Ukrainian history writing, but in the 1920s attacked the slogan of Ukrainian independence as being inseparable from chauvinism; he preferred Ukraine to join a socialist federation. [1] Ironically, Law No. 2538-1  prohibits one from insulting these men, yet Law No. 2558 bans support for their views.

Several organizations to be honored were demonstrably guilty of mass murder, for example the Organization of Ukrainian Nationalists (OUN) and its armed wing, the Ukrainian Insurgent Army (UPA). The OUN was a far right, clandestine terrorist organization that sought to establish a totalitarian, one-party, homogeneous Ukrainian state under its own absolute leadership. It was deeply anti-Semitic, collaborated closely with Nazi Germany, and played a key role in the pogroms that swept Western Ukraine in summer 1941. These claimed the lives of  between 13,000 and 35,000 Jews. In 1943-44, the UPA carried out a brutal campaign of mass murder against the Polish minority in Volhynia and Eastern Galicia as part of its strategy of establishing an ethnically homogeneous Ukrainian state.  About 90,000 Poles were among its victims. [2] In addition, the UPA tolerated no dissent among Ukrainians, torturing and murdering on the mere suspicion of treason. [3] Law 2538-1 is but the latest of the current Ukrainian government’s measures to celebrate the OUN and UPA. On October 14, 2014, Poroshenko designated the UPA as “defenders of the fatherland” and established an official holiday dedicated to their memory.

The danger is that a prohibition on “insulting” the “fighters” or questioning the legitimacy of their “struggle” is tantamount to a ban on critical research. The law does not specify what constitutes “insulting”, raising the question as to what scholars of modern Ukrainian history are allowed to write and say, and what they are not. How is the historian supposed to relate the recollections of Viktor Kharkiv, member of a collaborating unit created by the OUN, on how his men engaged in mass shootings in Vinnytsia in summer 1941, where, he wrote, “in two villages we shot all the Jews we encountered” while also honoring his memory? [4]  What if the historian does not believe his memory should be honored?

Past experience shows that the authors of the law believe that historians investigating such issues critically are conducting political defamation and not sound historical research. In 2012, Grzegorz Rossoliński-Liebe, the author of the first scholarly biography on OUN leader Stepan Bandera, faced furious protests for daring to arrive at the conclusion that Bandera’s ideology constituted a form of fascism. He had lectures canceled, received personal threats, and faced angry protesters denouncing him as a “liberal fascist” and the “lying great-grandchild of Goebbels.”  During this campaign, V’iatrovych wrote that Rossoliński-Liebe’s research was “far from scholarly” and his publications “more scandalous than scholarly.” Claims that the new legislation will only be applied to works of propaganda and not scholarship, can be of little comfort for critical historians.

Similarly, V’iatrovych has responded to criticisms of the recent legislation by insinuating that its opponents are useful idiots for Russian propaganda. He disingenuously denies the charge that the legislation will curtail academic freedom by referring to a passage in Law No. 2558 that exempts academic publications from the ban on symbols. This exemption, however, has no relevance to the prohibitions in Law No. 2538-1. Despite trying to enshrine one understanding of Ukrainian history in law, he presents his critics as the people wanting to ban historical interpretations with which they disagree.

Certainly, other countries have legislated history. In May 2014, President Putin signed a law banning “disrespect for the days of military glory” of the Second World War. It is also true that a number of countries have laws prohibiting Holocaust denial. But whereas the ban on Holocaust denial is intended to protect the memory of the victims, the Ukrainian law does the opposite: it shelters perpetrators from critical inquiry and elevates an ideologically motivated amnesia to state ideology.  One cannot but note the irony of a government seeking to banish its population’s supposed totalitarian mindset by legislating historical truth.