Joe Renouard is an Associate Professor of History at The Citadel. In 2015-16 he is a Resident Professor at Johns Hopkins University, School of Advanced International Studies, in Nanjing, China. 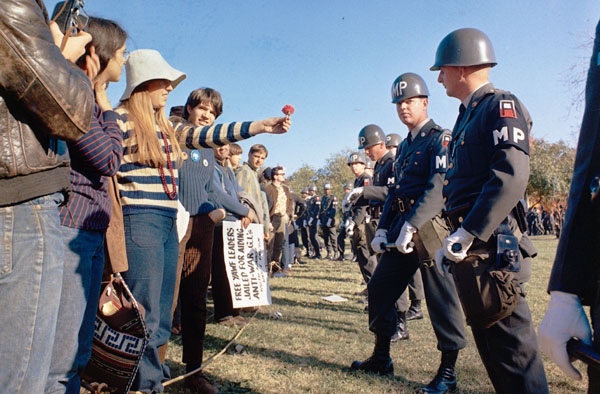 Forty years ago this week, television viewers witnessed some of the ugliest scenes of an ugly war. To paraphrase T.S. Eliot, this is the way the ten-thousand-day war ended: with a desperate mob scaling the U.S. embassy wall in Saigon; with the anxious, lucky few jostling for space on the helicopters that would fly them to safety; and with those same helicopters scuttled from the decks of American ships on the South China Sea. In the closing days of April 1975, Operation Frequent Wind saw South Vietnamese and United States forces carry out an eleventh-hour evacuation of more than 7,000 people from in and around the embassy compound. After nearly a quarter-century in Southeast Asia, the last Americans left in a flurry of mad desperation.

To many Americans, the final hours of the Vietnam withdrawal symbolized the kind of political failure, military impotence, and national weakness that had doomed the war effort from the very start. The last combat troops and prisoners of war were already home, but the humiliating fall of Saigon added yet another psychological wound that would take years to heal. Soon people would speak of a “Vietnam syndrome” – a deep-seated spiritual malaise that was manifest in widespread popular cynicism, mistrust of political leaders, neo-isolationist foreign policy, and a general reluctance to demonstrate American power abroad.

Yet wars fade from popular memory as they are eclipsed by later events. Americans of a certain age will recall how Vietnam and the traumas of the sixties overshadowed the Korean conflict of 1950-53, making Korea their generation’s “forgotten war.” A quarter-century earlier, Americans had seen the Second World War similarly overtake its predecessor in the popular conscious.

Now in 2015, Vietnam is our latest forgotten war – and this may be a good thing.

For young Americans, in particular, Vietnam is ancient history. To this year’s high school graduates born at the end of the last millennium, the war is merely a few pages in their social studies textbook, or a commemorative wall that they may (or may not) visit on a field trip to Washington. The war not only predates them by decades, but for many it even predates the birth of their parents.

Vietnam has also been overshadowed by four decades of conflict in the Middle East. From the Iran-hostage crisis to the first Gulf War to the more recent engagements in Iraq and Afghanistan, this generation has been reared on a steady diet of Middle Eastern unrest that has made Asia seem, by contrast, a region of stable governments, dynamic economies, and demographic vibrancy. Washington’s 1960s-era obsession with the spread of communism in Southeast Asia could hardly be more foreign to a twenty-first-century student raised on smartphones and iPads made in China. (Years ago, some Americans even saw the Middle East as the ideal place to exorcise our nation’s Vietnam demons. It is no coincidence that President George H.W. Bush heralded victory in the 1991 Gulf War by publicly proclaiming, “By God, we’ve kicked the Vietnam syndrome once and for all!”)

In assessing the legacies of Vietnam, we also have the benefit of hindsight. The United States did not win the war, but the broader implications of the fall of Saigon have narrowed with each passing year. In 1965, a majority of Americans believed that an independent, noncommunist South Vietnam was in America’s national interest, and they were willing to send troops to fight for that cause. Ten years later, virtually no one was so willing, and by the 1980s most Americans wondered why any troops had been sent at all. Just as important was the long-term outcome: North Vietnam may have won the military struggle, but its ideology lost. With the exception of North Korea, the Asian autocracies embraced statist capitalism (though not liberal democracy) as the path to development. Given this broader, geopolitical victory for America and the West, some scholars have even argued that the United States did not really lose in Vietnam, but rather fought to a stalemate and then withdrew, consistent with our national interests.

Of course, this long-term “victory” claim is cold comfort to those whom the conflict affected the most. The war and Saigon’s fall certainly mattered to the nearly three million Americans who served in country. It mattered even more to the families of the 58,303 killed, the more than 150,000 wounded-in-action, the 1,638 missing-in-action, and the countless thousands who endured the effects of post-traumatic stress disorder. Yet even these realities have faded from memory with the passing of time. Surviving Vietnam veterans now average 66 years of age, and just over 25% are no longer with us.

The Ironies of History: The Fall (and Rise) of Saigon

As for the Vietnamese people, a small and ever-shrinking number remember that terrible war. With a median age just under 28 years, Vietnamese citizens are more likely to recall their nation’s many border clashes with China in the 1980s than the war with America. And to heap irony on top of irony, the Vietnamese are now among the most enthusiastically pro-American people on the planet. In a 2014 Pew Research poll, 76% of Vietnamese respondents expressed favorable views of the United States, a number that places Vietnam squarely onto the list of the ten most U.S.-friendly nations.

Vietnam’s growing economy and expanding global role have pulled it even further from its troubled past. Vietnam is a potential middle-level power with the world’s thirteenth-largest population, over a decade of seven percent growth per annum, and a long coastline close to undersea energy deposits. The nation must still overcome some acute economic and political weaknesses, but tens of thousands of its citizens have pulled themselves out of poverty. Vietnam is taking advantage of its labor resources and promoting industrial output through low-wage labor, as evidenced by its four-hundred industrial parks. It has cultivated closer ties to Japan, India, the Philippines, and the European Union, and Hanoi is even trying to entice the nearly four million Vietnamese émigrés (half of whom are in the United States) to return and do business there. In short, Vietnam is not quite China, but it has grown conspicuously. As one Western diplomat told the writer Robert Kaplan, “They have gone from bicycles to motorcycles.”

In one of the great geopolitical turnabouts of our time, Vietnam now wants America back in its neighborhood. Forty years since the end of the war and twenty years since the two nations normalized relations, Hanoi seeks a strong American regional presence to counterbalance Chinese power. Sino-Vietnamese tensions have risen in recent years, due in part to China’s controversial claims over much of the South China Sea – claims that Vietnam and its neighbors have uniformly rejected. China’s establishment of an oil rig in disputed waters last year symbolized the Sino-Vietnamese power imbalance. Consequently, Hanoi has made many overtures toward the United States, including seeking to expand the Cam Ranh Bay port to accommodate U.S. Navy ships.

Washington has responded in kind. The United States and Vietnam have a common interest in security for the Strait of Malacca and the South China Sea, through which half the world’s merchant tonnage flows. Both also defend freedom of the seas, freedom of navigation, and respect for the Law of the Sea Convention. Even before the Obama administration’s 2011 “Asia pivot,” the United States had been enhancing relations with many nations in the region. More recently, the 2014 Quadrennial Defense Review and the 2016 national security budget continued the strong emphasis on East and Southeast Asia. Last October, the United States also partially lifted the ban on lethal weapons sales to Vietnam. This does not necessarily mean that Vietnam will buy more weapons, but it is certainly a sign of increased trust.

The economic side of the ledger shows even more promise. U.S.-Vietnam trade totaled $36 billion in 2014, a more than thirty-fold increase since 2000. The United States is Vietnam’s number one goods export market, and Vietnam is America’s 15th-largest supplier of imports, higher than several countries with much larger economies, such as Brazil, Russia, Australia, and Indonesia. The young Vietnamese consumer market (over 40% of Vietnamese are under 25) is a further enticement in the age of high-tech consumer goods and social media. The United States and Vietnam have further strengthened ties by joining with ten other Pacific Rim nations to negotiate the Trans-Pacific Partnership (TPP), a neoliberal trade agreement that is sure to increase bilateral commerce. The TPP may have only a mild impact on the U.S. economy, but as a developing nation, Vietnam stands to gain a great deal. When the TPP is finalized, Americans will see more Vietnamese imports on their store shelves, while the Vietnamese should enjoy higher labor and environmental standards.

Less visible, perhaps, though arguably more important in building goodwill, are American efforts to address the effects of Agent Orange (dioxin) and unexploded ordnance in Vietnam. The United States has spent nearly $100 million on ordnance removal efforts, and it has contributed $65 million to an Agent Orange contamination cleanup fund. Other low-key humanitarian efforts have included sending over $700 million to Vietnam in the last decade to help fight HIV/AIDS.

Needless to say, there are limits to the U.S.-Vietnam rapprochement. For starters, China is far too important to both countries, and neither Washington nor Hanoi is willing to move too quickly if doing so will imperil their ties with Beijing. China is Vietnam’s primary source of imports, and Beijing’s proposed Asian Infrastructure Investment Bank (AIIB) may further tempt Hanoi to seek Chinese financing for major infrastructure projects. Sino-American economic and financial ties are even more profound. Bilateral U.S.-China trade in goods amounted to nearly $600 billion in 2014, and China now holds around $1.3 trillion of U.S. government debt. There have been plenty of squabbles in the Washington-Beijing relationship, but each nation’s producers and consumers have cemented ties with their pocketbooks.

Among Vietnamese leaders, there is still some mistrust of Washington, though this owes more to recent policies than it does to memories of the Vietnam War. Those who see the United States as prone to vacillation in world affairs openly question Washington’s intentions. Awkward human rights issues in Vietnam are another hurdle. Hanoi’s one-party rule, its periodic crackdowns on critics, and its political prisoner problem remain sticking points in relations with the United States. There are also signs of U.S.-Vietnam trade friction on matters such as intellectual property protections and Vietnam’s exchange rate policy. Meanwhile, some in Vietnam worry that the TPP will give the United States too much regional influence or will increase the cost of pharmaceuticals and other U.S.-made products.

Given Vietnamese leaders’ misgivings about getting too close to any nation, it is unclear just how friendly Hanoi and Washington are willing to be. Vietnam has long followed a policy of no military alliances, no foreign troops on its soil, and no bilateral relationships against a third country. We are likely to see Hanoi continue to gain what it can in its relations with the United States, while at the same time working very hard not to be a pawn of any regional power, whether China, America, Russia, Japan, or India. Whatever path Hanoi and Washington take, the worst memories of the Vietnam War will likely fade even further into the past – and this may be a very good thing, indeed.