How Our War on Drugs Undermines Mexico

Aileen Teague is a Ph.D. Candidate in History at Vanderbilt University and formerly a U.S. Marine Corps Officer. She is currently a Researcher with the Fulbright Program in Mexico City. 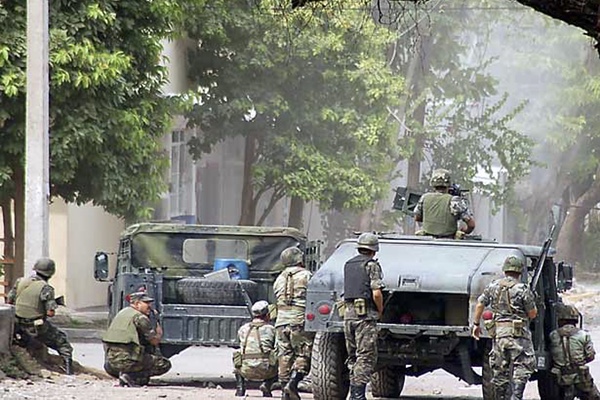 This June marks 44 years since President Richard Nixon declared a war on drugs, marking an unprecedented mobilization of U.S. resources to combat the drug trade domestically and abroad. The reason? A fear that narcotics use, especially during the Vietnam War era, posed a grave threat to society. Or perhaps, more accurately, drugs threatened authority figures during a period of large-scale revolution against social norms across much of the western world.

With a perceived increase in U.S. drug use, Nixon deployed the now ubiquitous war on drugs metaphor to generate increased funding for drug control. “Public enemy number one in the U.S. is drug abuse,” Nixon said to Congress in 1971. “In order to fight and defeat this enemy, it is necessary to wage a new, all-out offensive.” With this address came a complete discarding of any sort of prevention and treatment solutions to drug abuse, and the wholehearted embrace of a “war” within our own borders.

Enter Mexico, 1969. For years, Mexico’s domestic supply of psychoactive raw materials (cannabis, peyote, opium poppies, hallucinogenic mushrooms, etc.) concerned authorities on both sides of the border. Jack Kerouac, Allen Ginsberg, and a host of other popular figures had trekked to Mexico in the 1950s for the specific purpose of acquiring psychoactive substances. Throughout the 1960s, many others—hippies, students, and sympathizers of the antiestablishment culture—followed suit.

Months after coming into office Nixon ordered the border shut down in an operation known as “Interception” to cut off the flow of Mexican marijuana coming into the U.S. But as the complete shutdown of border commerce debilitated the Mexican economy, it was clear that Interception was also intended to force Mexico into complying with newly established U.S. drug policies such as supply-focused initiatives and more intense marijuana policing.

With the Drug Enforcement Agency’s (DEA) formation in 1973, the DEA and other U.S. institutions would utilize the war on drugs as grounds for increased involvement overseas. The abduction, torture, and murder of undercover DEA agent Enrique “Kiki” Camarena in 1985 resulted in another U.S. clampdown on Mexico when Mexican authorities failed to locate Camarena or any suspects in the crime.

Believed by the reigning Guadalajara cartel to be the leak of a major drug bust by the Mexican military, Camarena was kidnapped by corrupt police officers in broad daylight. The DEA eventually forced the Mexican government’s apprehension of suspects. Interestingly, a number of 2013 reports alleged CIA involvement in Camarena’s murder, as he was purportedly a threat to U.S. drug operations.

As the focus of the drug trade expanded to the Caribbean in the 1980s, the U.S. government’s strict targeting of the drug supply over air and water ultimately facilitated Mexican cartels’ control of land routes.

So did the North American Free Trade Agreement (NAFTA), established in 1994, which opened the U.S.-Mexico border for free trade. As cheap U.S. agricultural goods flooded Mexican markets, the Mexican farming industry was severely hit, prompting the cultivation of drugs. In due time, the increased flow of north-south commerce also included illegal substances from Mexico and other parts of the Americas.

Much more is known about Mexico’s drug violence since the early 2000s. Places like Ciudad Juárez epitomize the contemporary Mexican drug war. Between 2006 and 2012, Mexican president Felipe Calderon presided over an unparalleled mobilization of Mexican resources to fight off drug cartels.

The more liberal, forgiving attitudes toward drug control in the U.S. of recent years might suggest a break form the long, at times, violent history of U.S.-influenced drug enforcement. There is, for example, widespread acknowledgement that the war on drugs has been a policy failure. The Obama administration has distanced itself from the war on drugs, at least rhetorically. And yet last year’s federal drug war budget -- topping $25 billion -- and the continued efforts of U.S. institutions abroad in the name of drug control, remind us that a war on drugs is still alive and well.

The current system is propped up by many different U.S. and Mexican institutions—police forces, the military, the CIA, the State Department, etc.—each with its own set of interests. Methodical funding cuts would have to be made alongside fundamental revisions of the roles these institutions play for real change to take place. For all of the talk of marijuana legalization and an end to the war on drugs, policies along these lines have yet to be established, let alone brought more fully into the global drug debate.

There are a number of unrecognized dimensions to the way the war on drugs has played out in Mexico over the last four decades. During the 1970s and 1980s, for example, Mexican police forces and its military conflated drug policing with targeting political subversives and campesino farmers. In other words, drug policing became a convenient justification for monitoring perceived enemies of the state.

It is baffling how the U.S. remains very much involved in Mexican drug affairs at the same time it is trying to distance itself from the impact of the drug trade in Mexico. This tension played out last fall in the rather silent U.S. response to the drug-related murders of 43 student teachers in the Mexican state of Guerrero and the government’s attempts at a cover-up. Mexicans know the U.S. is embedded in their country’s drug control efforts. One can only imagine their sense of disappointment when the U.S. failed to speak up against a major incident of government corruption.

If the U.S. has chosen to break with the war on drugs, then it should start making noticeable funding cuts in drug control. Sounds simple enough, but this should be done in conjunction with a reduction in the size of drug enforcement missions at home and abroad. Finally, moving past a war on drugs in the long term must involve nuanced, multilateral reforms with foreign counterparts. Otherwise, what the U.S. facilitates in Mexico would not be the reduction of the drug trade, but increasing divisions between north and south of the border, divisions largely of its own creation, as the longer history of the war on drugs reminds us.