In Defense of Flip-Flopping

David O. Stewart is the author of "Madison’s Gift: Five Partnerships That Built America" and other works of history and fiction. 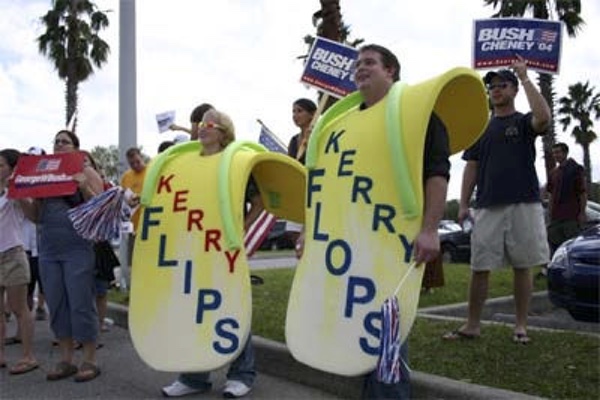 “The matter does not appear to me now as it appears to have appeared to me then.”-- Baron Bramwell, Andrews v. Styrop (1872)

The presidential campaign of 2016 has barely begun. The Iowa caucuses are nine months away. Yet the hounds, baying and snapping, have been loosed against the political crime of flip-flopping, charging after any suggestion that a candidate has reconsidered an earlier opinion.

On the Democratic side, former Secretary of State Hillary Clinton is being pilloried (hard to resist the rhyme) for changing her views on a foreign trade deal, not to mention immigration, and gay marriage, and government support for ethanol.

Then there’s former Florida Governor Jeb Bush, as close to a front-runner as the Republicans have. Could he have flip-flopped? You betcha. How about Indiana’s “religious freedom/anti-gay” law, plus immigration, or even his wavering commitment to the Paleo diet.

What about fellow Floridian Senator Marco Rubio? Surely he’s too fresh-faced and principled to fall into the flip-flop trap? Ah, but he did. That fiendish immigration issue snagged him squarely in the flip-flop.

Governor Chris Christie of New Jersey? Flip-flopper on the Common Core education program. And immigration. And the War on Drugs.

What about Wisconsin Governor Scott Walker, a straight-shooting Midwesterner, not him too? Immigration again, this time an “Olympics-quality” flip-flop according to a former Walker aide, plus that pesky ethanol issue, and anti-gay discrimination.

Whoa, whoa, whoa. To paraphrase the Bob Dylan lyric, something is happening here, and we do know what it is. Presidential campaigns are devolving into a circular game of “gotcha.” Have you changed your position, rethought an idea? Then you are by presumptively unworthy, unreliable, and downright scummy. To the political guillotine with you!

But don’t we want our leaders to revise their views and understanding of the world based on new information or new ideas? Indeed, don’t we want them to be wise and candid enough to figure out when they’re just plain wrong?

Today’s demands for unyielding political consistency would disqualify a number of former presidents from office. In 1861, Abraham Lincoln supported a constitutional amendment to preserve slavery in those Southern states where it was legal. Eighteen months later he issued the Emancipation Proclamation. Flip. Flop. Or maybe it was the sharpening of moral sensibility and strategic sense in the face of a horrible civil war.

Woodrow Wilson won re-election in 1916 by boasting that he “kept us out of war,” shielding American boys from the slaughter of The Great War. Less than five weeks after he took the oath of office for his second term, Wilson responded to German submarine attacks by asking Congress to declare war.

James Madison so disliked Alexander Hamilton’s Bank of the United States – fearing it as a centralizing force – that he created a formal opposition to the administration of President George Washington. When the bank’s charter expired twenty years later, Madison decided the bank was useful after all and called for its renewal. After Congress created the second Bank of the United States, Madison signed the enacting legislation into law.

Even the great Washington, pillar of American rectitude and integrity, was forced by British military successes to abandon his strategy of confronting the British Army in major battles. He adopted instead a “Fabian” strategy of avoiding pitched fights while harassing the British and draining its soldiers and its citizens of commitment for a foreign war.

We’ve all flip-flopped on something. Between 2003 and 2013, an opinion survey found that support for gay marriage rose from 32 percent to 53 percent. That’s millions and millions of flip-floppers.

Presidents sometimes need to stand up against public opinion and political opposition. Sometimes they need to accommodate both. A candidate who changes position frequently may lack the ability to stand firm. One who rarely changes position may be impervious to reason. What really matters isn’t whether the candidate has changed his or her view, but whether the candidate makes good decisions, whether he or she makes sense. Let’s concentrate on that.