Thomas A. Bailey: Dead and Forgotten by His Publisher?

Two of Ray Raphael’s recent books, "Constitutional Myths: What We Get Wrong and How To Get It Right" and the tenth anniversary revised edition of "Founding Myths: Stories That Hide Our Patriotic Past," discuss historical mythologies in textbooks. 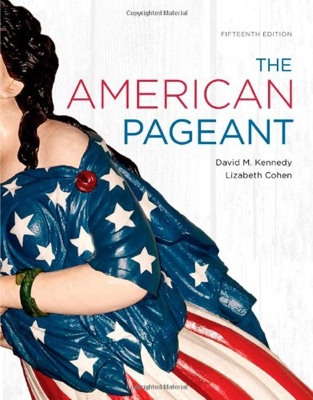 This is the latest edition.

The first volume of The American Pageant, a current college text whose cover and title page bear the names of David M. Kennedy of Stanford and Lizabeth Cohen of Harvard, contains this passage:

Lincoln also had his troubles, but on the whole they were less prostrating. The North enjoyed the prestige of a long-established government, financially stable and fully recognized both home and abroad. Lincoln, the inexperienced prairie politician, proved superior to the more experienced but less flexible Davis. Able to relax with droll stories at critical times, “Old Abe” grew as the war dragged on. Tactful, quiet, patient, yet firm, he developed a genius for interpreting and leading a fickle public opinion. Holding aloft the banner of Union with inspiring utterances, he demonstrated charitableness toward the South and forbearance toward backbiting colleagues. “Did [Secretary of War] Stanton say I was a damned fool?” he reportedly replied to a talebearer. “Then I dare say I must be one, for Stanton is generally right and he always says what he means.”

Compare these words to a text authored by Thomas A. Bailey, also of Stanford, in 1956:

Abraham Lincoln also had his troubles, but on the whole they were less prostrating. The North enjoyed the prestige of a long-established government, financially stable and fully recognized both home and abroad. Lincoln, the prairie politician totally without administrative seasoning, proved superior to the more experienced but less flexible Jefferson Davis. Able to relax with droll stories at critical times, “Old Abe” grew in stature as the war dragged on. Tactful, quiet, patient, yet firm, he developed a genius for interpreting and leading a fickle public opinion. Holding aloft the banner of Union with inspiring utterances, he revealed a rare charitableness toward the South and forbearance toward backbiting colleagues. “Did [Secretary] Stanton say I was a damned fool?” he replied to a talebearer. “Then I dare say I must be one, for Stanton is generally right and he always says what he means.”

Under normal circumstances, the striking resemblance between these would be conclusive proof of plagiarism, but there is an extenuating circumstance here: Bailey’s book was the first edition of The American Pageant, and Kennedy’s and Cohen’s the fifteenth, published in 2013. Yet why, if Thomas Bailey wrote much of this highly successful historical narrative, does his name not appear on either the cover or the title page of the latest edition?

Customarily, when textbooks are revised, the names of new authors are added to original ones, and for decades the publishers of American Pageant—Heath, Houghton Mifflin, and Cengage—followed this tradition. In the sixth edition, published in 1979, 76-year-old Bailey took Kennedy on as a partner, both receiving credit, and when Bailey died four years later, his name survived intact. In 1998, for the eleventh edition, Cohen joined the team, and the triumvirate was recognized through the fourteenth edition. But in 2013, breaking with custom, Cengage, the current publisher, decided to forsake the lead author, no longer a recognized luminary. Kennedy and Cohen became for all intents and purposes authors-of-record at this juncture, fully credited on the cover and title page.

Commercially, rebranding makes sense. Publishers want their texts to be seen as new and current, and removing Bailey’s name distances American Pageant from its mid-twentieth century roots. Cengage does not want students to think that they are reading many of the same passages that their grandparents or even great-grandparents might have read when they went to college in the 1950s.

While the packaging is different, however, much of the product remains the same. David Kennedy and Lizabeth Cohen, highly regarded scholars specializing in 20th Century history, added much to American Pageant, but for lengthy sections in Volume I, they left Bailey’s distinctive prose virtually untouched. The fifteenth edition’s chapter on Manifest Destiny, for instance, mirrors the original; only two paragraphs have been dropped and no new material added. Line edits are primarily word choices (“stunned” for “crestfallen”; “land hungry” for “expansionist”; “faraway California” for “sun-drenched California”) and transposition of phrases. (“As wars go, the Mexican War was a small one” replaces “The Mexican War was a small one, as wars go.”) In this chapter, which details United States expansion in the mid-nineteenth century, the recent edition, like its predecessor, includes not a word about the injurious impact on the Native nations.

Bailey’s treatment of the Founding Era, from the Stamp Act in 1765 to ratification of the Constitution in 1788, remains almost entirely intact. Additions include one 56-word paragraph about women in the Revolutionary War; three paragraphs about blacks in the war; a short section on republican virtue and “republican motherhood”; one paragraph about executive powers in the Constitution; brief treatments of early abolitionism, the quest for religious freedom, and democratic elements in the state constitutions and the U.S. Constitution; and a two-page insert that incorporates the rest of the New World into the narrative. Together, these amount to fewer than five of fifty-eight pages; the rest, almost to the word, is Bailey’s.

Revisions in other sections of Volume I, aligning closely with current paradigms, are more significant. New chapters on the colonial era treat African-Americans and Native Americans in far greater depth, and a Jim Crow bias no longer taints the narrative on Reconstruction. Yet Bailey’s pen is still much in evidence, as it is throughout. Sometimes this works to the text’s benefit. The original treatment of the American Revolution as a global war, unchanged, is unsurpassed by any later text.

Removed from prominent view, Bailey does surface in a prefatory section called “About the Authors.” Here Cengage credits him with being “the original author” of American Pageant who “saw it through its first seven editions.” This attribution is readily overlooked, however, buried as it is on p. xxix following a seven-page table of contents, a list of maps, another of available supplements, some remarks about goals and content revisions, and acknowledgements that give a nod to over fifty teachers who contributed to or reviewed the revised text, but do not mention Bailey. (Bailey’s original acknowledgement confessed “deep indebtedness” to over one hundred colleagues, ten students, and various editorial and secretarial personnel.) Although honored as an author emeritus of sorts, he is simultaneously demoted. Kennedy and Cohen appear in photos, but Bailey is not pictured. Three of Kennedy’s other books and three of Cohen’s receive considerable notice, but Bailey’s scholarship is quickly summarized and subordinated to his textbook: “He was the author, editor, or co-editor of some twenty books, but the work in which he took most pride was The American Pageant.” While Kennedy and Cohen receive one page each, the nine lines devoted to Bailey take up only one-quarter of a page; the rest is left blank.

That page could easily have been filled. Bailey’s pioneering scholarship emphasized the impact of public opinion on foreign policy throughout American history. His first major book, Theodore Roosevelt and the Japanese-American Crisis, detailed how racist attitudes toward Japanese-Americans in the first decade of the twentieth-century, and in particular San Francisco’s 1906 segregation of students into an “Oriental school,” led the nation to the brink of war. (This was published well before World War II and Japanese-American internment). Other works explored public opinion and imperialism; foreign relations before, during, and after World War I; Russian-American relations throughout history; and the Marshall Plan. In The Man in the Street (1948), he wrote, “The most powerful nation in the world today is the United States, and consequently the most powerful body of public opinion in existence is formed by the American people. What the government in Washington does or fails to do in the field of foreign affairs will depend largely on the wishes of our citizens, and what our citizens demand or fail to demand will affect mightily the destiny of this planet.” He berated the public for its ignorance, and he did his part to correct this by writing not only The American Pageant but also A Diplomatic History of the American People, which went through ten editions.

Cengage’s brief bio closes by noting that Bailey “liked to say” that by writing American Pageant “he had taught American history to several million people.” Taken out of context, this seems a self-satisfied pronouncement; in context, it validates a noble life mission that Bailey elucidated at the end of The Man on the Street: “We should, above all, undertake the Gargantuan task of raising the educational and apperceptive level of our entire population… Upon every citizen in our democracy rests a solemn obligation to inform himself so that he can direct our foreign policy—his foreign policy—along intelligent and farvisioned lines.” 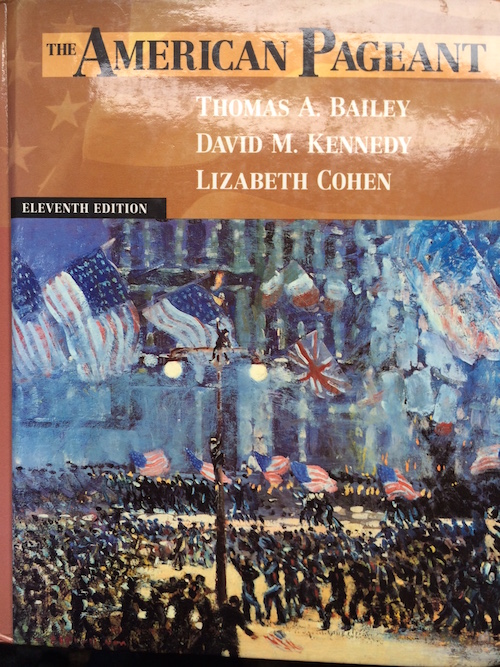 Bailey did consider the textbook he wrote in 1956 and revised for a quarter century his most enduring achievement—he titled his autobiography, published a year before his death, The American Pageant Revisited: Recollections of a Stanford Historian. Indeed, it has outlived him by a third of a century and counting, but no longer under his name. Barely crediting the man who engendered this work and wrote significant portions of the current edition seems (literally) like ghostwriting; it is even suggestive of plagiarism, which the Merriam-Webster dictionary defines as “the act of using another person's words or ideas without giving credit to that person.”

According to that standard, Cengage draws close to a line that must never be crossed, one that the American Historical Association’s Statement on Standards of Professional Conduct describes as “The expropriation of another author's text, and the presentation of it as one's own” and which it calls “a serious violation of the ethics of scholarship. It undermines the credibility of historical inquiry.” Rightful authorship is very nearly expropriated in this case, not by the titled authors but by a publisher who possesses the rights to the expropriated material and who presumably received permission from Thomas Bailey’s estate to reprint it at will. In a court of law, Cengage could point to that and also to the nine lines, inconspicuous or not, that admit to Bailey’s parentage. Adhering to the letter of the law, however, the publisher pays no heed to its spirit, and its negligence does compromise the “credibility of historical inquiry.”

The AHA warns with reason against endangering historical inquiry. In the historical community, we date documents in order to understand their context. A textbook is an historical document, and words penned in 1956 should be identified as such, not attributed to the twenty-first century. More is at stake here than the repute and standing of any single author. Chronological distinctions and accurate attribution form history’s substrate, the foundation on which any text must rest, and the foundation of our very profession. Legal fine points aside, textbook publishers must accept the preeminence of such standards and not allow marketing strategies to subvert them.

POSTCRIPT More than a year ago, I expressed my concern about authorship of American Pageant to its publisher. The response was brief: “Thanks for your feedback!” Cengage is now promoting the sixteenth edition of American Pageant, dated 2016, authored by David M. Kennedy and Lizabeth Cohen. 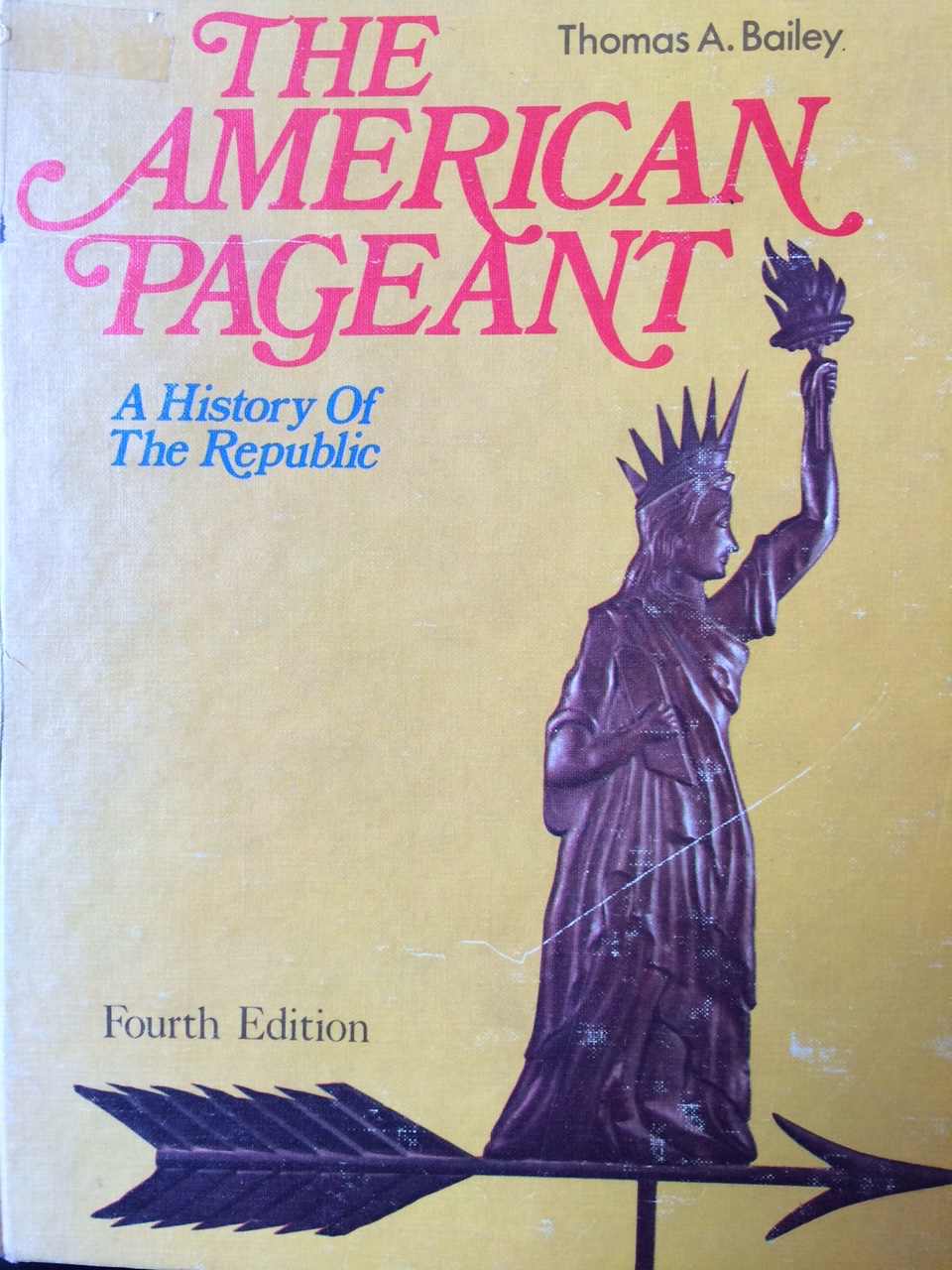