Madeline Y. Hsu is associate professor of history and past director of the Center for Asian American Studies at the University of Texas at Austin. Her books include "Dreaming of Gold, Dreaming of Home" and the coedited anthology "Chinese Americans and the Politics of Race and Culture.”  Her latest book is "The Good Immigrants: How the Yellow Peril Became the Model Minority."

Asian immigration surpassed that of Hispanics for the first time in 2009, a major shift that drew comment but hardly a murmur of opposition or concern.  This tacit approval is surprising considering that just 50 years ago, until passage of the 1965 Immigration Act, Asians faced the greatest barriers to immigration and were the targets of the U.S.’s earliest enforced immigration restrictions, and were thus the first illegal immigrants.  Since then, Asian Americans have become widely perceived as model minorities who are highly educated and largely employed in professional and technical occupations or in business, and as such are welcome additions to American society. 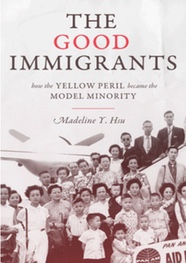 This swift integration and elevation of Asians into America’s multicultural society is closely related to the expansion of U.S. ambitions across the Pacific.

Until the mid-twentieth century, apart from Japan, most Asian states and colonies bore little political or economic importance.  Asians seemed to have few historical connections with Americans, who strongly identified their national identity and culture with their primarily western and northern European roots.  As Chinese began arriving on the west coast in greater numbers, in 1882 they became the first and only group identified by race for severely limited entry.  The targets of U.S. immigration control expanded rapidly to include more categories of the unwelcome such as those with diseases, paupers, criminals, radicals, and by 1924, almost all Asians.  The foundations of border controls and immigration enforcement so familiar today began with federal efforts to control the movements of Chinese who were the earliest of illegal immigrants to sneak across land borders and falsify documents and statuses.

World War II and the Cold War, however, transformed the old and new countries of East and Southeast Asia into increasingly important partners for the United States in its leadership of international struggles first against fascism, and then against communism.  Shared political and economic values came to trump increasingly illegitimate beliefs in racial difference.  The shared struggle against the communist world meant the United States could no longer afford to ignore and insult potential Asian allies and trading partners by keeping out their peoples.

International conflict and competition led the United States to ramp up its presence and engagement in Asia, through participation in wars, establishing of military bases, dispatching of personnel, and capital investments.  These programs sought to increase American influence over other countries and societies, sometimes with disastrous consequences as in Vietnam and the Southeast Asian peninsula, but also provided greater opportunities for contact and mutual collaboration.

Forty years ago, the wrenching fall of Saigon gave sudden birth to the dynamic and vibrant Vietnamese American community now familiar to many Americans through celebrities such as Project Runway winner Chloe Dao, NFL player Dat Nguyen, and actress Maggie Q alongside widely appreciated consumer experiences such as cheap mani-pedis, banh mi sandwiches, and pho noodles.  In 1975, this first wave of about 130,000 refugees were already quite attuned to the United States, as many had worked with Americans and U.S.-style services and offices developed through U.S. attempts to prop up South Vietnam against Ho Chi Minh and communist North Vietnam.  The withdrawal was all the more bitter because it culminated a quarter century of failed U.S. efforts, both covert and overt, and the extraordinary allocation of tens of thousands of military personnel and billions of dollars in advisory, administrative, institutional, and arms expenditures, to change the course of Vietnam’s history.

This protracted loss played out across a deeply troubled era that witnessed a steady diminishing of American idealism and confidence, but gave rise to the remaking of the United States as a more multicultural, arguably more democratic nation and leading world economy, in part through new flows of immigrants.  Asian peoples and cultures became more familiar and acceptable to Americans even as the growing integration of the world economy has driven the United States to develop friendships with not only the most politically strategic, but also the most promising business partners.

Under the entwined banners of democracy and capitalism, the United States has forged lasting relationships with some of the world’s most quickly developing economies, which are now largely in Asia including countries such as India, China, South Korea, Hong Kong, and Taiwan along with Vietnam.  Immigrants are the chief actors in building business endeavors and it is no wonder that these are precisely the countries from which the greatest number of Asian immigrants arrive, ambassadors signaling not only mutual political goodwill and friendship, but also eagerness to forge and advance business ties.  The 1965 Immigration Act enshrined these new priorities by removing restrictions that privileged race and national origins, giving priority to family members, certain occupations, investors, and refugees.  Although forged through war and capitalist expansion, America’s embrace of selected Asian immigrants underscores the unifying pursuit of political stability, opportunity, and economic advancement that characterizes our twenty-first century version of multiculturalism.