Day 1: Highlights of the Annual Meeting of the Organization of American Historians (2015)

The last time the OAH met in St. Louis was a disaster.  This was back in 2000 and the hotel where we were scheduled to hold our meeting was accused of racist practices at a branch facility in Florida and other places.  At the last minute and at great cost to the organization the entire meeting was moved to a local university.

With that as background, I can fearlessly say that Day 1 of the 2015 meeting has gone well.  But there has been a problem.

Notice anything missing from this room?

It's one of the rooms at the newly renovated Renaissance Grand Hotel in St. Louis where OAH members are staying during the convention.  It's lovely but it's missing a desk and chair!  As someone on Twitter posted, that's rough on historians who are used to working during a convention:  typing up notes for a talk, emailing friends, reading the New York Times online. The hotel reportedly says that Millennials don't want desks in their rooms.  Welcome to the future!

Admittedly, the rooms are quite nice.  The bathrooms feature real stone counters (at least they look real; they're not).  But the renovations aren't quite complete.  The lobby's under construction.  This means:  No big couches for relaxing, no places to network and chat with old friends, no nuthin' like that.  Though the Capri bar is open and it's got a dining area, the main restaurant is closed.  (Update:  Thursday evening the OAH informed members that the hotel " is opening the Statler Ballroom, located next to the bar on the lobby level, for networking and relaxation this evening after 7:00 pm.")

Guests are greeted by a black curtain wall when they enter the hotel.  This is what's hidden from view:

This isn't how it was supposed to be.  When one of the OAH organizers found out the hotel construction was behind schedule she burst into tears.  Yes, the OAH will be negotiating for a partial refund.

This is the OAH registration area, which is located along with the exhibition hall across the street in a facility that's slam dunk perfect.  Looks nice, doesn't it?

This is the glamorous hotel guest registration desk:

Off-camera there was an inviting stack of gift bags like they give out at Hollywood extravaganzas.  Might the hotel be compensating for our inconvenience?  The thought crossed my mind.  But it turned out the bags were for a large wedding party.

On the upside, the OAH got its members what we've been clamoring for for years:  Free Internet service! That addresses one of the chief complaints made in the past at both the OAH and AHA conventions:  The WiFi usually costs ten bucks a day or more.  But not at this year's OAH.  Hooray! (Note to AHA:  The OAH made this a negotiating point. It's one reason this hotel was selected over others. )

The theme of the convention, picked by President Patty Limerick, is Taboos.  For once the stated theme of a convention is actually heavily reflected in the program. There are sessions about free love in the Gilded Age, atheism in the 19th century, policing sex on the US-Mexican border, and other topics generally not addressed at past OAH meetings.  Racier topics like incest in the Civil War drew larger audiences (see below) than some other topics. 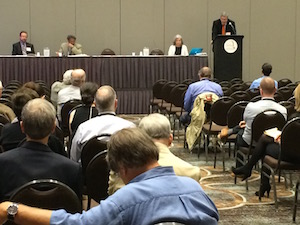 No topic seemed off limits, whether the subject involved race, religion, gender or sex. One panel's exploring the gay activist Emma Jones and her “not-so-discreet lovers.” Another deals with the whitewashing of gay history.  There’s even a panel on Marx.  Okay, that's not so controversial.  But the title is tantalizing:  Marx, Taboo or Totem?  Totem?

And then there are the really taboo subjects:  “Is it possible to produce quality historical scholarship and do so as part of a business?”  And then there's this, perhaps the most taboo subject of all:  “What?!  You teach at a community college?  Confronting a career taboo.”

This was something we hadn't recalled seeing before at the OAH.  It's an interpreter for the deaf who was translating what panelists were saying for a single member of the audience seated toward the back. 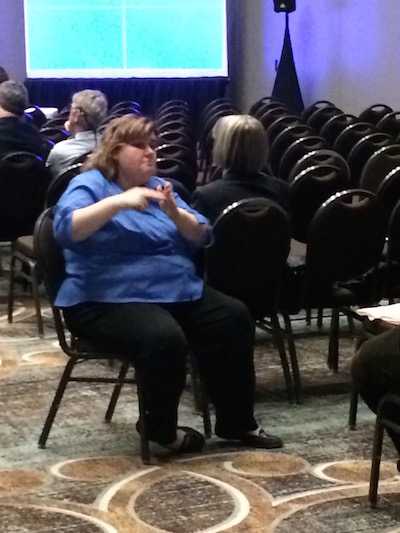 New York Times editors will want to watch this interview with the University of Missouri's Robert Poch, who says the paper misconstrued the nature of the fight in Arizona over the law that gave the police the right to ask people for their papers.  The Times believed this was an example of interposition.  Not so fast, says Poch.

One of the draws of the St. Louis convention was the Cardinals.  An afternoon game may have accounted for the spotty attendance of many panels on Thursday. One panel, which shall go nameless, was cursed.  Two of its four members had family emergencies and couldn't make it.  That may have accounted for there being only three people in the audience (later upped to four when someone wandered in late).  Ouch! (We are sparing the panel members by NOT posting the grim picture.  Use your imagination and remember that this could easily be your panel.)

The big event of the day was a presidential panel that imagined what American history would look like if it were written from the perspective of St. Louis.  This drew hundreds:

Among the many points made by panelists:  Black women in the fifties and sixties found St. Louis a better place to make their mark in the civil rights movement than almost anywhere else.  White flight happened here earlier than in other places.  And St. Louis was where the vicious racist Gerald L. K. Smith set up camp.  Oh, and by the way, Ferguson -- which will be the subject of a special panel on Saturday night -- is one of just 90 small cities that surround St. Louis.  90.  That fact reflects the racist history of the area.  When blacks moved into St. Louis, whites fled to suburban communities.

Some 1400 people have showed up at the convention, according to executive director Kathy Finley.  That's 400 fewer people than attended Atlanta, but east coast cities always draw higher numbers.  And another fifty to a hundred people are expected to sign up by the weekend.

Most of the people in attendance are, like this reporter, in the "distinguished" demographic group.  I am not bragging.  That's what my badge says.  When you get old they call you distinguished.

Young people don't know what they're missing.  This is one panel member they would have appreciated.  It's Russ Henderson, who's spent the last several years researching the age at which people throughout history have been allowed to vote.  His answer is stunning, as you'll see if you watch this video.

And that's it for now.  Below is an iconic picture we couldn't resist sharing.