William Lambers is the author of "Ending World Hunger" and "The Road to Peace." His writings have been published by the New York Times, Chicago Sun-Times, Huffington Post, Des Moines Register and many other news outlets. 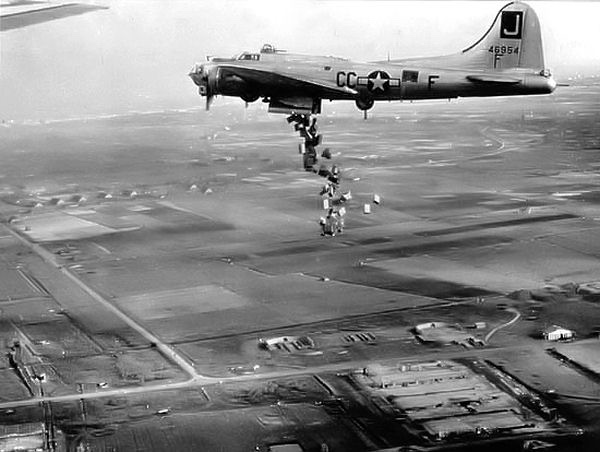 Food being dropped into the Netherlands from a U.S. Eighth Air Force plane in May, 1945. The food drops British and American planes saved millions from starvation.

It was 70 years ago this spring when the U.S. Air Force undertook what one pilot called the greatest mission he had ever flown. It was an operation over the Netherlands near the end of World War II. It was not bombs they were dropping, but instead it was food.

The Netherlands was suffering from a famine as a result of Nazi occupation. Millions of the Dutch people would die unless the Allies took action.

An urgent message from the Supreme Allied Headquarters under General Eisenhower stated: “For sheer humanitarian reasons something must be done at once. The Dutch government states supplies in occupied Holland will be used up by 28 April. Our information confirms theirs that deaths through famine will then start on a considerable scale unless supplies are promptly replenished.”

British and American planes airlifted food during April/May into the Netherlands, which saved millions of lives.

Lt. Alfred E. Isaac, the aforementioned pilot, wrote to his parents in Cincinnati, "People jammed roads, bridges, dikes and roof tops, waving table cloths, handkerchiefs, and any old rag they could find," as the planes flew overhead dropping the food packages. "It made a lump in our throats to see the appreciation on the faces of those people. That is all the credit I want."

Truck convoys of food entered the Netherlands soon thereafter. Food stockpiles had been built up for this humanitarian purpose, not without great difficulty. Food had to be diverted to feed Belgium during that winter and the Netherlands supply had to be replenished. It shows the importance of advance preparation for hunger relief. There are always behind the scenes heroes doing the planning.

It's important to remember these heroic acts of World War II that saved people from certain starvation. But today the tragedy of famine continues.

There are war victims today that are being blocked from receiving food aid. They are being starved to death as you read this. We must keep up the fight to bring food and hope to these suffering people.

At this very moment, civilians in Syria, Iraq, Yemen, South Sudan and other war zones are struggling each day to find any kind of food. They depend on the humanitarian agencies like the UN World Food Programme (WFP), Catholic Relief Services, Save the Children, UNICEF and others who can bring them life-saving aid. That is if combatants allow them to pass through safely.

In Yarmouk refugee camp, which is near Damascus in Syria, a tragedy is unfolding. The camp is home to Palestinian refugees caught in the middle of Syria's civil war.

The civilians of Yarmouk, over the last couple of years, often have been blocked from receiving humanitarian aid because of the fighting. The United Nations Relief and Works Agency (UNRWA) was able to bring in some food and supplies in March. These were the first deliveries in months. 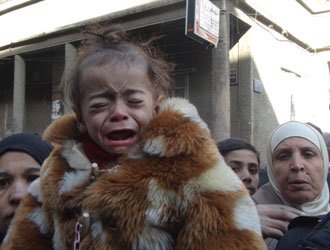 A malnourished child weeps on Yarmouk's main street in February 2014. The area has been cut off from humanitarian aid because of Syria's Civil War.  © UNRWA Photo by Rami Al Sayed

But then ISIS, the terrorist army, attacked Yarmouk and they now occupy most of the camp and surrounding area. The aid convoys cannot get through now. The UNRWA spokesperson, Chris Gunness, describes “unimaginable suffering to the 18,000 Palestinian and Syrian men, women and children trapped in Yarmouk, who survive under constant threat of armed violence, and remain unable to safely access water, food and the most basic healthcare.”

In South Sudan there are also starving war victims that relief agencies are trying to reach. WFP and Catholic Relief even air drop food in remote jungle areas to feed the hungry in South Sudan.

Humanitarian agencies struggle daily on finding ways to bring food to those in war zones. They must negotiate with combatants and hope for a ceasefire to move supplies in to a besieged area. In some cases negotiation is not even possible.

The terrorist group ISIS has prevented children in Syria from receiving a special food called Plumpy'Doz, which fights malnutrition. Without this food, small children will suffer lasting physical and mental damage, or death. They need this food desperately.  Yarmouk is one of the areas where Plumpy’Doz and other food shipments have stopped because of ISIS.

Other times relief agencies cannot feed the hungry because they lack the necessary funding. This can lead to a cut in rations or even a suspension. This has taken place in Syria where WFP needs around US $25 million a week to feed hungry war victims. They depend on voluntary donations but sometimes they do not receive enough.

This is a tragedy that can be avoided, if we have the will. There is more than enough food on the planet for everyone. Relief missions to feed the hungry should always have the funding they need.

As we mark the anniversary of the great World War II mission that saved the Netherlands, we must keep that spirit alive. They are starving people today that are days way from death unless food can be brought to them. We, the international community, need to summon every ounce of strength and determination to help save them. That is our mission.