Is Vladimir Putin an Ideologue, Idealist, or Opportunist?

Walter G. Moss is a professor emeritus of history at Eastern Michigan University and Contributing Editor of HNN. He is the author of "A History of Russia," Vol. I and Vol. II. For a list of his recent books and online publications, click here. 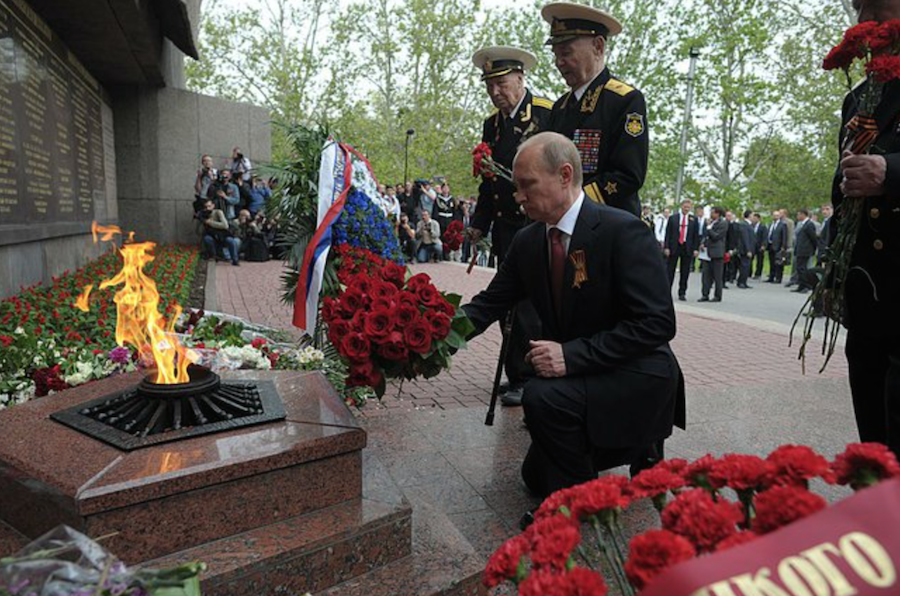 Putin laying wreaths at a monument to the defenders of Sevastopol in World War II, 9 May 2014 (www.kremlin.ru)

Does President Putin have any deeply held values or is he just a political opportunist willing to sacrifice any principles to political expediency? This is a question often asked about politicians—and not just in Russia. But it is a simplistic one. Most politicians have at least a modicum of principles and are also somewhat opportunistic. Putin is no exception.

Let’s first look at the principles and values side of the mix. One of the best books on Putin, Mr. Putin: Operative in the Kremlin (expanded ed., 2015), by Fiona Hill and Clifford Gaddy states: “The first key to Vladimir Putin’s personality is his view of himself as a man of the state, his identity as a statist. . . . The ideas he expresses about the state, as well as the society subordinated to it, belong to a clearly identifiable and long-established body of Russian conservative political thought.” The authors also write: “Russian history, the Russian language, and religion—are also themes that Putin repeatedly embraced in the 2000s,” and they are “core elements in Russian conservative political thought in both the 1990s and the 2000s.” And they cite a more detailed 2012 examination of Putin’s “liberal-conservativism” philosophy by Canadian professor Paul Robinson, who contends that “this ideology” has significant roots stretching back to individuals like Tsar Nicholas II’s prime minister (1906-1911) Peter Stolypin.

Like many conservatives, Putin often speaks of values. In his first major political manifesto in late December 1999, just before assuming the presidency, he wrote that he was “against the restoration of an official state ideology in Russia in any form. There should be no forced civil accord in a democratic Russia. Social accord can only be voluntary. That is why it is so important to achieve social accord on such basic issues as the aims, values and orientations of development.” He also spoke of “the traditional values of Russians.” As Hill and Gaddy note, he claimed that “the Russian state lost its status when its people were divided, when Russians lost sight of the common values that united them and distinguished them from all others.” These values included “patriotism, collectivism, solidarity, derzhavnost’— the belief that Russia is destined always to be a great power (derzhava) exerting its influence abroad—”and statism, the belief that “the individual and society are, and must be, subordinate to the state and its interests.”

Putin’s annual presidential addresses to the Federal Assembly often mention values. He has delivered these speeches since 2000, except for the four years beginning in 2008 when Dmitry Medvedev served as president and Putin as prime minister. In his year 2000 address he said, “We have had and continue to have common values. Values which join us and allow us to call ourselves a single people.”

In the three addresses he has given since resuming the presidency we see many more mentions of values. In 2012, he stated “We must wholeheartedly support the institutions that are the carriers of traditional values.” He expressed understanding for why Russians in the post-Soviet period “discarded all ideological slogans of the previous era” and instead stressed private gain and interests more. But like many nineteenth-century Russian conservatives who thought the West overstressed private gain and material interests, he warned that “working for one’s own interests has its limits,” and stated that “it is in civil responsibility and patriotism” that should unite Russians. He suggested that in rejecting Soviet collectivism and earlier Russian communalism in favor of Western individualism, “spiritual values” that support “mutual assistance” had been lost.

In his December 2013 address he declared that 2014 was to “be a year of enlightenment” and spoke of “the all-encompassing, unifying role of Russian culture, history and language for our multi-ethnic population.” He went on to say that Russian schools need “to help our nation’s citizens form their identity, absorbing the nation’s values, history and traditions.” He also asserted that “today, many nations are revising their moral values and ethical norms,” destroying “traditional values,” accepting “without question the equality of good and evil.”

Shortly after this speech, American conservative Pat Buchanan wrote “Is Putin One of Us?” and suggested that in “his stance as a defender of traditional values” Putin is very much in tune with U. S. conservatives.  Buchanan added, “Peoples all over the world, claims Putin, are supporting Russia's ‘defense of traditional values’ against a ‘so-called tolerance’ that is ‘genderless and infertile.’ . . . Putin is not wrong in saying that he can speak for much of mankind.” More recently, columnist William Pfaff has written that “the resemblance of President Putin's ambitions for his Russia to those of the neoconservatives in the contemporary United States bear a striking formal resemblance.”

In his December 2014 address Putin said that his government’s “priorities are healthy families and a healthy nation, the traditional values which we inherited from our forefathers, combined with a focus on the future, stability as a vital condition of development and progress, respect for other nations and states, and the guaranteed security of Russia and the protection of its legitimate interests.” And he once again referred to values when he added, “Conscientious work, private property, the freedom of enterprise—these are the same kind of fundamental conservative values as patriotism, and respect for the history, traditions, and culture of one’s country.”

In mid-April 2015 the ISEPR Foundation, an organization “close to the Kremlin,” held a forum in Kaliningrad to discuss “Russia and the West: the dialog on values in the civilization field.” According to the invitation I received, the forum was to contain three sections: 1) “History and retrospective vision. The origins and essence of Western conservatism”; 2) “Current trends. The support for traditional values in the West and in Russia”; and 3) “Perspective vision. Traditions and future image.” In the third section topics to be addressed included “Western civilization in context of traditional values crisis,” and “Russia as an emerging source of values system: analysis, evaluation and perspectives.” As is clear, the forum agenda certainly suggests that the foundation wishes foreign conservatives to consider the possibility—as Buchanan does—that their views on values have more in common with those of Putin than with those Buchanan brands as militant secularists, whether living in the United States or elsewhere. (See here for a brief report on the forum.)

Thus far we have seen that Putin does hold some basic conservative beliefs and is willing to use various means to trumpet them. There is little evidence to support the charge that he really doesn’t believe any of the rhetoric he spouts about values. But he is also opportunistic enough to stress and exploit the universal appeal of his conservative principles. And here we return to the other part of his political makeup—opportunism, defined as “the taking of opportunities as and when they arise, regardless of planning or principle.” His opportunism in regard to domestic and foreign policies does not imply that he has no principles or values, simply that he does not worry much about them in pursuing his goals. But his conservative Russian nationalism remains intact.

Again our approach fits in with the viewpoint of Hill and Gaddy. They write not only that “Putin was and remains a restorationist, a conservative reformer. He was not, and is not, a revolutionary,” but also that “Putin is a pragmatist, not an ideologue. In setting up his system of governance, he did not follow any specific model that can be captured by a description in the abstract. . . . It is not an intentionally designed, well-formulated system. Rather, it is piecemeal and ad hoc. . . . It has evolved to fit the circumstances.” Putin has “not tried to twist some fixed orthodoxy of ideas or ideology to pursue his goals.”

Regarding Putin’s foreign policy, the authors believe that Putin thinks the United States and NATO are hostile to him and trying to undermine his influence both domestically and in border countries such as Georgia and Ukraine. Possible NATO expansion to these two countries, following the earlier expansion into the former Soviet territories of Estonia, Latvia, and Lithuania, has been one of his main fears. To fight back against such a threat he has been prepared to use all the weapons at his disposal including extensive propaganda. What Hill and Gaddy say above about his system of governance also applies to his foreign policy: “it is piecemeal and ad hoc. . . . It has evolved to fit the circumstances.” But it also has a single goal—to strengthen Russia’s power and status, especially in the territories that were once part of the USSR.

A recent special issue of Johnson’s Russia List, one of the Internet’s most valuable blogs dealing with things Russian, devoted 38 articles to the topic of Russian disinformation, which included propaganda and the “information wars” going on between Russia and Western media. Putin’s emphasis on conservative values is one of the tools in this propaganda war. Typical of the articles was one that asked, “Is America losing the Information War?” It declared that Western media, including Radio Free Europe and Voice of America, need to emphasize more that the United States and other Western democracies are attempting to create “a truly just society in which all people are treated fairly without regard to the color of their skin, or cultural background, their religious beliefs or gender preferences,” and that “when people honestly see things differently, they can express their views openly, even offensively, without fear of arrest or censure.”

In a previous HNN essay I agreed with President Obama’s contention in The Audacity of Hope, “that Democrats are wrong to run away from a debate about values” and that the question of values should be at “the heart of our politics, the cornerstone of any meaningful debate about . . . policies.” Furthermore, I argued that “the Right’s attacks during the [U.S.] culture wars have demonstrated more moral flaws than have the responses of the Left.” Similarly, I think that the values espoused by Putin are inferior to Western liberal values such as the importance of human rights, including for gays and for dissenters, and tolerance. Especially unsound is Putin’s statist position that (as Hill and Gaddy express it) “the individual and society are, and must be, subordinate to the state and its interests.” Without attempting to impose liberal Western values on other peoples and recognizing that different countries have varying traditions and needs, Western progressives should welcome any values debate with those defending those of Mr. Putin. Such a debate might also help both sides clarify their values and the extent to which they are living up to them or just proclaiming them mainly for opportunistic purposes.

Although Putin is not an ideologue but more of an opportunist, he still possesses some values. To what extent are Western leaders different? And, as I have explored previously, which values are most worthwhile in the political arena? Should Russian and Western political values differ or was Mikhail Gorbachev more correct when in 1988 he stressed, “politics, too, should be guided by the primacy of universal human values”?