Taylor Downing is a television producer and writer. He is the author of “Secret Warriors: Key Scientists, Code Breakers and Propagandists of the Great War,” out now from Pegasus Books. 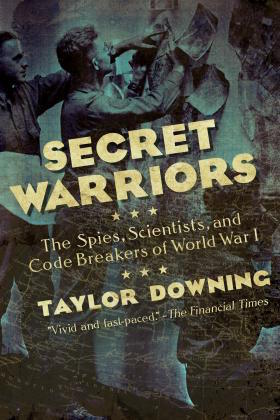 What comes to mind when you think of the First World War? Trenches? Mud and barbed wire? Poets? Stalemate? Incompetent generals? Futility and sacrifice?

All of these are important aspects of the war. But there is another side that is rarely acknowledged. The First World War also witnessed a scientific revolution. Between 1914 and 1918, the foundations were laid for numerous scientific and technological advances of the rest of the 20th century. Since so many of the scientists who brought about these changes worked in secret, I call them the ‘Secret Warriors’ of the First World War.

For instance, the science of aviation was completely transformed by the war. Aircraft in 1914 were underpowered and usually could not fly at more than 80mph — some even went backwards when flying into a strong head wind! The British armed services went to war in 1914 with 272 aircraft. By November 1918, the RAF possessed 22,000 machines, some of them with engines powerful enough to stay airborne for 16 hours.

In medicine, a pre-war surgeon would be considered an expert if he had carried out one hundred operations. Between 1915 and 1919, Sir Harold Gillies, the New Zealand surgeon working for the Royal Army Medical Corps specializing in facial reconstruction surgery, carried out 11,000 operations. He learned so much in such a short space of time that he virtually created the modern science of plastic surgery; following the war, he went on to develop cosmetic surgery and to pioneer gender reassignment surgery. Psychologists who had only ever had a few hundred patients before the war, now worked with thousands of victims of what was then called ‘shell shock’ — what we know today as PTSD, or Post Traumatic Stress Disorder. Both bodies and minds were opened up to new studies and analysis, and the war changed the shape of medicine.

The science of intelligence-gathering and code-breaking barely existed before the war when the popular view was that gentlemen did not read each other’s mail. In 1914, the Admiralty set up the nation’s first radio listening service and brought together a bunch of eccentrics and geniuses to decode German naval signals and diplomatic messages. They were able to tell exactly when the German High Seas Fleet was going to venture out into the North Sea, and they read all the communications between Berlin and its embassies in the New World. After the war, the decoding unit became permanent and, in 1938, moved to Bletchley Park where it famously brought together another generation of eccentrics and geniuses to decipher the German Enigma signals (which many are now familiar with because of the movie “The Imitation Game”). The techniques developed for this intelligence-gathering and code-breaking played a crucial role in helping to create the modern computer industry.

Of course some contributions of science in the First World War were far more ghastly. The German chemical industry, the most advanced in Europe, came up with poison gas in April 1915. And although the Allies denounced the use of chemical weapons, the British and French soon prepared to respond. The British army first used poison gas in September 1915. There followed a sort of chemists’ arms race and the development of ever more terrible and lethal gases — from Chlorine to Phosgene and from Diphosgene to Mustard Gas. After the war, the use of chemical weapons was prohibited by international agreement and they were not used in combat in World War Two. But of course they have been used more recently, with toxic effect in Vietnam, Iraq and Syria.

In the development of propaganda, too, the First World War marks a turning point. Filmmakers produced films that were distributed in cinemas throughout the world. One of the first propaganda films, The Battle of the Somme, had an immense impact and was seen in Britain by an estimated 20 million people (out of a total population of 46 million). The Great War became the first ever mass media war.

The story of the extraordinary individuals behind these dramatic wartime changes is an aspect of the history of World War One that has rarely been told. But these ‘secret warriors’ were a remarkable group and their stories deserve to be rediscovered. The First World War was not just a war of trenches, slaughter and sacrifice. It changed the scientific and technological landscape of the century to follow.