A native of Vietnam and an associate professor of political science at the University of Oregon, Tuong Vu has authored many books and articles about the Cold War, the Vietnam War, and the Vietnamese revolution. He can be reached at thvu@uoregon.edu. 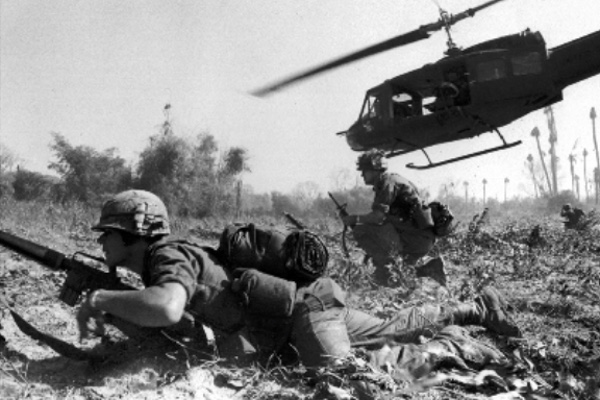 Forty years ago this month, the savage war in Vietnam ended dramatically with North Vietnamese tanks crashing through the gates of the Presidential Palace in Saigon. As Americans continue to struggle over the legacies of the Vietnam War, it may surprise many of us that our former enemy who won that war is confronting a crisis over its meaning.

Ever since the end of the war, Hanoi leaders have sought to capitalize on their military victory to legitimize their rule. Every year the event is celebrated with great fanfare, as “the day when South Vietnam was liberated and the country reunified.” The victory on that day, Vietnamese are told again and again, epitomized the 4,000-year history of Vietnamese struggle for independence. Its greatness validated the eternal mandate of the Communist Party to rule the country.

Yet public opinion inside Vietnam about the meaning of the war has quietly shifted in the last two decades as Vietnamese gained the freedom to travel abroad, as scholars gained access to previously classified documents, and as the internet broke the government’s monopoly on access to information. The internet has been the government’s chief adversary more than anything else. Most Vietnamese were born after the war, and without the internet they would not have been able to know what really happened during the war and in its aftermath.

No opinion survey on the topic is permitted, but one gets a sense of the public mood by following online discussions and by initiating informal conversations with ordinary Vietnamese. Much to the government’s chagrin, Vietnamese now view the war as a proxy war and civil war rather than one for national liberation and unification.

In fact, Mr. Le Duan, the leader of the Communist Party who is now acknowledged by historians as the primary architect of the war effort within North Vietnam’s leadership, said in closed meetings that the ultimate goal of the war was to establish communism all over Vietnam. As recently declassified documents show, Mr. Duan repeatedly insisted that the war was fought not only in Vietnam’s interests but also for the Soviet bloc.

Mr. Duan was no Soviet lackey. Recent studies by historians Lien-Hang Nguyen and Pierre Asselin show that he rejected the advice of Soviet leader Nikita Khrushchev who supported peaceful coexistence between the two Vietnams. In fact, Mr. Duan ordered the arrests of many high-ranking Party members and hundreds of their supporters who opposed his risky military campaign known as the Tet Offensive. They spent years in prison, being accused of spying for the Soviets. This was the civil war in North Vietnam that was only recently revealed.

In this civil war, the enemies of Mr Duan and other fanatical leaders in Hanoi included not only their comrades but also North Vietnamese landlords, industrialists, merchants, intellectuals, and even ordinary peasants. At least 15,000 landlords were executed during a land reform in the mid-1950s. Shops and factories as well as private newspapers were nationalized soon afterwards. Thousands of writers, professionals, and business owners who criticized those policies were sent to labor camps.

By the early 1960s, the free farmers of North Vietnam were no longer free. They were coerced into joining collective farms which paid them barely enough to survive. They fought back with those “weapons of the weak” which are so astutely analyzed by the political scientists James Scott and Benedict Kerkvliet: footdragging, petty thefts of public property, and destruction of crops and livestock.

Radical communist policies were not implemented because Hanoi needed to mobilize resources for war. After the war ended in 1975, the same policies were forced upon South Vietnamese as well. Truckloads of “books that spread decadent capitalist culture” were seized and burned on the streets. Big businesses and factories were nationalized immediately, followed by smaller ones. The free farmers of South Vietnam, like their northern compatriots earlier, were forced to join collective farms.

It wasn’t just former South Vietnamese officials, but also many intellectuals, religious leaders, and entrepreneurs ended up in “re-education camps” or “new economic zones” as well. The civil war in this sense did not cease in 1975, but much later, in the late 1980s, when the Party abandoned collectivization, legalized private enterprises, loosened the ideological yoke on writers, and lifted restrictions on international travel for ordinary people.

The greater freedom and comfort Vietnamese enjoy today came not from the end of the war, but from the end of the communist revolution in the late 1980s. The market reforms that the Party launched since then have been popular, but have ironically invited greater scrutiny into its past fanaticism. Numerous eyewitness accounts of the land reform, re-education camps, and famished life in collective farms are now readily available online for those who want to learn more about that past. This gives birth to the popular joke that “the longest and bloodiest path to capitalism is through socialism.”

In fact, Vietnam’s “market economy with socialist orientations” is making the Vietnamese road to capitalism longer and more brutal. Market reforms have significantly lifted living standards, yet at the same time have fueled increasing discontent. The Party has refused to return ownership of land to farmers, enabling officials at all levels to grab land to enrich themselves. State corporations monopolize the rice export trade and make millions of dollars every year while farmers are forced to accept low prices for their crops.

Except for a few honest leaders, the Party has morphed into a family-run racket. Children of officials, or the “red princes and princesses,” are now routinely appointed to key positions early on to succeed their parents when they retire. This perverse outcome naturally causes the war that brought the country under the Party’s control to be seen in a new light. As the popular poet and once-People’s Army soldier Nguyen Duy wrote, “whichever side won in war, it is the people who lost.”

General Do, the most “Bolshevik” among the dissidents, joined the communist party in his teens and was the commissar of North Vietnamese forces in South Vietnam during the later years of the war. In the 1990s, he gave up hope on communism and called for reassessing the communists’ contributions to the country, pointing to Taiwan, South Korea, and Singapore, which had achieved independence and economic prosperity without being led by a communist party. For his criticisms, Mr. Do was expelled from the Party. At his funeral, the government even ordered thugs to harass the hundreds who came to pay their respects.

In a recent two-volume book about postwar Vietnam, journalist Huy Duc admitted that in hindsight it was the South that liberated the North, not vice versa. North Vietnamese lived in abject poverty caused mostly by their leaders’ fanatical policies, yet many were led to believe that their socialist system was superior and that their Southern compatriots’ lives were much worse under imperialism. What they saw with their own eyes in the South after 1975 liberated their minds from the web of lies told by their leaders.

Mr. Duc grew up in North Vietnam during the war and once served as a captain in the People’s Army of Vietnam. He had access to top Party leaders and their advisers, and maintained a balanced perspective throughout his book. Mr. Duc’s book, which was published in the U.S. and sold on Amazon last year, created an immediate sensation inside Vietnam. It spurred lively online debates for months afterward, and has received widespread acclaims from Vietnam experts.

Mr. Duc was close to the late Vo Van Kiet, who was Vietnam’s Prime Minister in the 1990s. During the war Mr. Kiet was one of the top leaders of communist forces in the South. His wife and two children were killed during a bombing raid, yet he was honest enough to have once admitted that the anniversary of the communist victory in April 1975 brought not only joy to millions of Vietnamese but also sorrow to millions of other Vietnamese.

Forty years after the end of the war, prominent Vietnamese from diverse backgrounds now feel that it was a costly mistake. Of course, the Party would never admit that. A military parade is being planned in Ho Chi Minh City, formerly Saigon, to commemorate the 40th anniversary of the communist victory. We’ll have to see whether the show of guns can substitute for the loss of mandate. As the symbolism of that victory has shifted, how long the regime will still be around to celebrate future anniversaries is another interesting question to ponder.